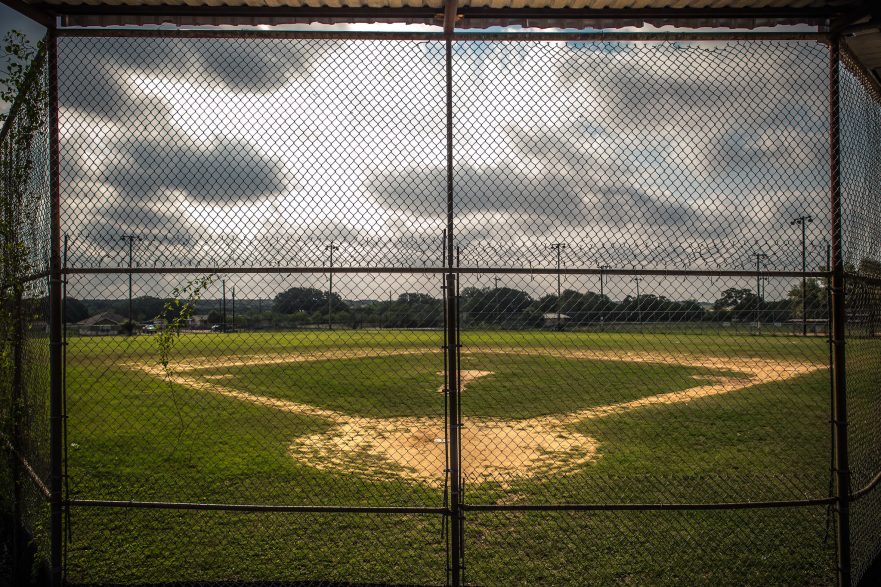 The playground at St. Mary’s was a cracked and bumpy blacktop square maybe a hundred feet long on each side and surrounded by a tall anchor fence on two sides, the school on another, and an old garage that completed the square.

The garage was a really low, gray, four-car structure. I was never sure who, if anyone, used it. I never saw the doors open. Never saw a car. And the little square windows on the doors were covered with dried up, crusty paper taped from the inside and fading to some shade of yellow. I never, ever, in my seven years at St. Mary’s saw anybody go in or out of the garage. It was a creepy place, right there on our playground. Here’s how eerie it was. No one ever yanked on the doors to see if they’d open or tried to get a look behind the aged paper. We mostly steered clear of it.

Two sides of the yard were blocked by that tall anchor fence which separated the school from the surrounding neighborhood, and in spring the fence was covered with big, fluffy lilacs whose scent wafted into the school on those long lazy afternoons, after lunch, after running around on the hot tar. By the time the end of the day approached it was almost impossible to stay awake at my desk.

The fourth side of the playground was the school itself.

During recess, the girls stood around in little groups and giggled and talked, probably about which boys were cute and who they wanted to “go-out” with. That always cracked me up. “Go-out!” Where the hell were they going to go in sixth grade.

But the boys played. We’d play Red Rover and Buck Buck, two really rough contact games that the nuns hated. There was no official gym class, we were all just turned loose out on the asphalt school yard and ran around like lunatics for half an hour. When recess was over, we’d be hoarded back into our classes, only now we were sopped with sweat and pretty ripe. Soon enough the classroom began to take on the “flavor” of gym class, if you catch my drift.

On one particularly beautiful, warm May afternoon, the lilacs in bloom, the smell of the freedom of summer in the air, we were playing softball with Mr. Daly. He had scrawled the bases onto the asphalt with a piece of that big chalk. The pitcher’s mound was the storm grid in the middle of a big dip in the yard. Home plate, also scribbled with chalk, was at the far end of the playground, right in the corner where the anchor fences met. This meant that we were hitting toward the school which loomed in the background. Its two-story façade was all brick, and the windows were massive and rectangular and heavy. Mr. Daly had watched us grow up by playing some kind of ball with us every Wednesday since we were in first grade. And even though we were in sixth grade now, we still played softball against the backdrop of the school. The building was certainly far enough away from this goofy, awkward bunch of sixth grade Catholic schoolers, Mr. Daly was not at all worried about anyone hitting a ball against the school, or worse, through one of those huge windows.

By sixth grade I was five-foot-seven, the biggest kid in the school, an all-star little leaguer, and a lefty with good power. I got up to the plate (the chalk-scribbled square on the asphalt) just as I had done every Wednesday since I was six.

“OK, Staniz, show ‘em what ya’ got,” Mr. Daly called out, and he lobbed the ball with a slow, lazy arc through the warm May morning. I took my best swing and launched the ball way up over all the kids in the school yard. The sky was a brilliant blue and the ball disappeared into the massive shadow cast by the school. I stood mesmerized for a moment. Everyone did. What a shot. We all just stared as the ball rose and rose until it disappeared into that shadow. And then we heard it — the hideous impact of ball on glass, the sharp sound of glass shattering and raining down onto asphalt. I had smashed one of the huge windows right where a class was going on. I tried to imagine how scared the kids inside were. I just stood there not sure what to do, and then I heard Mr. Daly’s voice in the deep silence of the aftermath.

“You asshole, Stanizzi! You asshole! What the hell is wrong with you!? You broke the…you…stupid….you…son of a bitch!”

Whatever happened next. I couldn’t tell you. My gym class career was over, of course. But what is relevant here is the sound of smashed glass shattering, and Mr. Daly calling me an asshole, over and over. I can still feel the sting of his words. I was as surprised as anyone. I had no idea I could hit that far. Mr. Daly insisted that I did it on purpose, but how ridiculous is that?

I don’t remember much before or after it happened. But that singular moment, would go from meaningless to perpetually unforgettable.

It’s all just a game, but something always breaks and is never fixed. ~ Tyler Malone

John L. Stanizzi is author of the collections – Ecstasy Among Ghosts, Sleepwalking, Dance Against the Wall, After the Bell, Hallelujah Time!, High Tide – Ebb Tide, Four Bits, and Chants. His newest collection, Sundowning, will be out this year with Main Street Rag. Besides Mad Swirl, John’s poems have appeared in Prairie Schooner, American Life in Poetry, The New York Quarterly, Paterson Literary Review, Blue Mountain Review, The Cortland Review, Rattle, Tar River Poetry, Rust & Moth, Connecticut River Review, Hawk & Handsaw, and many others. His work has been translated into Italian and appeared in many journals in Italy. His translator is Angela D’Ambra. John has read and venues all over New England, including the Mystic Arts Café, the Sunken Garden Poetry Festival, Hartford Stage, and many others. For many years, John coordinated the Fresh Voices Poetry Competition for Young Poets at Hill-Stead Museum, Farmington, CT. He is also a teaching artist for the national recitation contest, Poetry Out Loud. A former New England Poet of the Year, John is prose editor for the online journal, Abstract Mag TV. John teaches literature at Manchester Community College in Manchester, CT and he lives with his wife, Carol, in Coventry.