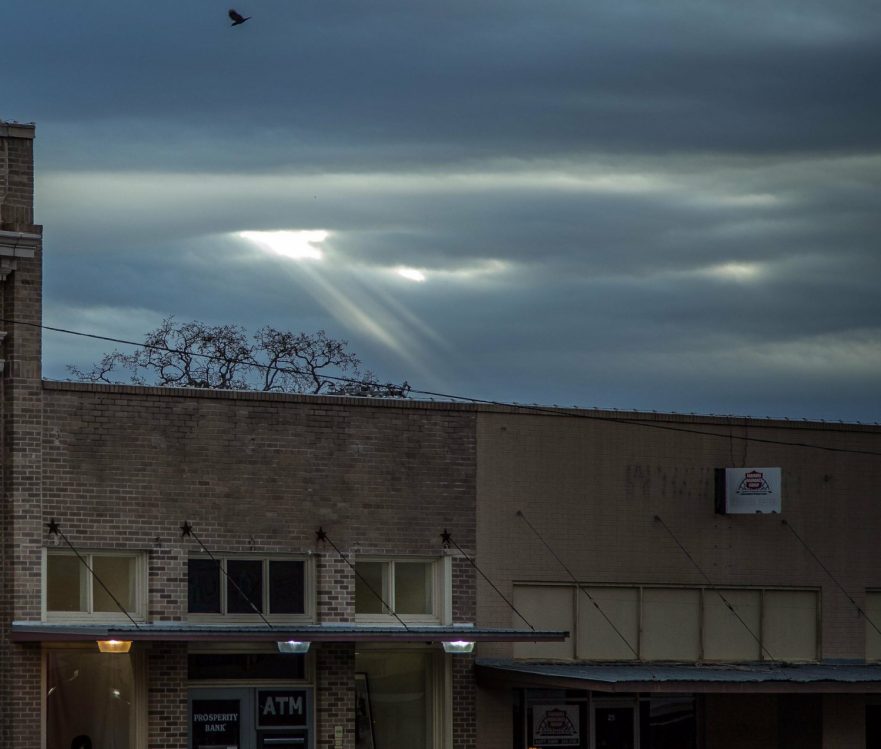 photo "From Above" by Tyler Malone

Nobody knows why or how. Things just happen. For all science thinks it knows, the vast storehouse of the unknown dwarfs what man knows. So, it was with concern and alarm that Dart stepped across the threshold. For it was a threshold of no return. Deep into inky darkness he fell. Swimming, in an apparent weightless condition, Dart flailed his arms and kicked his legs. Finally, his feet found a bottom and he stood as the inky blackness turned gray then light. Dawn billowed all around him.

He looked out. It was a biblical scene. A group of mongrel dogs were being baptized. A man, a hairy man naked but for skins, stood in waist deep water. The dogs, one by one, walked into the water and dog paddled before him. John, for that is what the man was called, took each dog by the fore paws, raised the pooch out of the water, and spit a stream of water upon the dog’s snout. He then shouted “I baptize you in the name of the next meal you’re gonna get! And being lazy all day long!” Tossing the animal toward the shore the animal scrambled out of the water and onto the shore. There the dogs shook, and water fell as holy water in droplets upon the impious land.

Dart, incisive as he was, knew what had to be done. He unsheathed his knife. Felt with his thumb the razor-sharp blade. With a bloodcurdling cry he fell upon the Baptist. In no time he had the Baptist’s head severed. He motioned to the animals, but no mutt would partake of the body. The dogs merely sniffed the air and turned their heads. Disdainful is what they were, of good meat.

“What, do you want me to butcher and cook him for you?” Dart could not understand. Dog not eating fresh meat. Dart put the Baptist’s head under his arm. He began to walk, his sandals tight, tunic loose, to Jericho. A way down the road he looked back. He noticed the dogs were following him. He more forcefully grasped the bloody head he held under his elbow.

He walked on. Dart knew he was no Joshua. This troubled him. He sat down to ponder. He placed the severed head in front of him facing him. He looked over his shoulder. The dogs had stopped a hundred feet from him. They were yipping while watching him.

Nothing occurred for a second or two. All was quiet except for the wind whistling through desert canyon walls. Jericho miles away Dart sat gazing at the bloody disheveled head before him. As he stared, lost apparently, in holy or not so holy reverie, the Baptist’s eyes opened.

Dart looked upon the head. To speak with the dead. His face a mask of inscrutable command, of complacency, of irritation, Dart addressed the Baptist head. “Our apostles are canine,” he said, “of no particular breed. They are naked, hungry, barking,” said Dart. “They want for nothing but God.”

“It is true,” affirmed the Baptist head. The face of the head was animated now, fully operational.

Dart looked into the Baptist’s eyes. A miracle. Sitting on a rock, animated bloody head before him, facing him, Dart came to his conclusion, indeed, what is the crux of this story.

The Baptist’s head was alert. Eager, it seemed, to converse. “What on Earth do you mean?” the head proclaimed. Its voice appeared that of a rather refined English gentleman, two centuries before such a thing existed.

Dart was curt. He had no time for such shenanigans. He’d been to the mountain. “I’ve a question.” Dart proposed.

“Say your piece,” said the head.

“Why what?” countered the head.

“Why you, and not some other bloke in skins, eating honey and locusts?” insisted Dart.

“I happen to like honey and locusts,” said the head, “rather enjoy them with my tea.”

“Queen agrees with that, does she, mate?” Dart persisted. “While she’s dunking her Garibaldi’s?”

Dart could take it no longer. He stood up, flushed, tall as his lean long monkey legs could lift him. Towering over the Baptist head, Dart felt a surge of evolution rush to his head. He cleared his throat. He’d been to the mountain. Laid eyes upon the source. The energy that makes men die, women too, everything. Makes ‘em grow, too. And he lived. He returned. Eventually, following a silence that cleared the air; “Religion is no more of the Gods than I am,” Dart said. “Moreover,” the clothed monkey-ape said, “me, a character in a story,” he looked down at the head, then over to the sitting, waiting apostle dogs, “I am the same as God.”

The dogs arose from their haunches. They barked. They’d heard what Dart said. Sacrilege.

“In what way?!” spurious Baptist head sneered, mocking Dart. “In what manner,” the Baptist head spit. “In what manner, in what world, sniveling monkey, is your being a character in this or in any story in any way remotely being like God? Pray tell, heathen!” the head fumed. It frothed at the mouth. Its breath, sea smell from Galilee, peppered the air.

Dart, as was his evolutionary way, responded calmly, most assuredly. In his thoroughly American accent, his speech was crisp, clear, unadorned with excessive affect, like an American him or herself.

“Written by men,” he said.  And that closed down a vast era of time, with a whimper.

All hail. All worship. All hell! ~ Tyler Malone