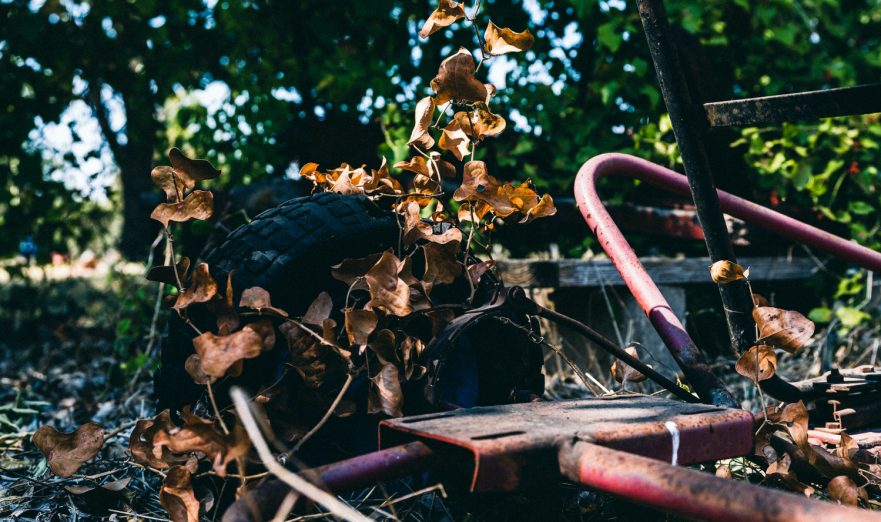 photo "She's Still Got the Spirit" by Tyler Malone

People don’t usually vanish if you turn around.

George and I started back to our cars from the diner after lunch. He used his walker on the narrow sidewalk and urged me in front of him. I was thinking how difficult and how wonderful our lunch was that day. I had been in an emotional spin from arguments with my wife and daughter, but George is the perfect listener.

“Nah, I’ve got a doctor’s appointment,” he answered.

I made a joke, “Those women of mine drink the same Kool-Aide.”

When George didn’t laugh, I turned around. He was gone.

I almost fell off the curb. He’d been talking to me moments before. I returned to the diner thinking he had left something behind. No one had seen him.

With his walker, he couldn’t have gone far. I was in a fog. I had been under a lot of stress lately and feeling so upset I could barely think. Might it have been something I said? Might this be a dream?

My first thought was to phone his wife. But what in the world would I say? George’s disappearance seemed so improbable. And what would she say?

George was failing with an array of serious maladies: Osteoperosis, Parkinson’s, Pancreatitis. Could it be he just died?

Walking back, I didn’t see his car in the lot. I stepped into my Prius; the seats were hot from the sun. I wanted to get home. Perhaps this would all begin to make sense to me in a calm, familiar setting. The traffic was terrible getting out of the lot. I thought I drove for several minutes but then realized I hadn’t moved.

I turned around and saw George in my back seat. He smiled his crooked Armenian smile at me.

“Hi Larry, it’s George Derderian. Remember, I was in your parenting class at church last winter?”

“We’re good, everybody’s fine. The reason I’m calling is I would like to see you for therapy.”

I was quiet for a few moments. I came to admire this man in my classes. He had been on my mind.

“No, no.” I cut him off. “It would be fine. But I’ve been thinking about calling you to get together. I’d rather have you as a friend than a patient. I can get you a good therapist.”

“Let me get you some names, and then we can plan our coffee.”

We never got that coffee, but the following Saturday we biked over the county till dark and shared family stories. We were two guys with teenage kids and all the insanity that accompanies that. Our meetings became regular. Sometimes tennis, sometimes lunch. On occasion, we’d take our wives for dinner.

The more I came to know George, the more fascinating he seemed. A Marine Judge Advocate in Vietnam, he was appointed a Federal Prosecutor after discharge. He was in line for a seat on the bench when his father asked him to help run the family business. George did so without protest, though it didn’t escape him that his younger brother, the doctor, was not summoned. At fifty, he entered New York Theological Seminary which interrupted our lunches. They were sacrosanct to me, and I railed at his absence. I felt genuinely angry with him. But when he graduated and I finished throwing my fit, we resumed. He became an assistant pastor at his community church. Our discussions took on a new tone. After we argued the Problem of Evil, I often was the first to hear his homilies.

The morning I put my beloved dog down, I sobbed looking at her empty dish. I phoned George.

“I’ll be by in twenty minutes.”

George drove us to The Planting Fields, a lovely park not far away.

He put his arm through mine, leaned over, and kissed my cheek. For some two hours, we walked, arm in arm through the park. Late summer blooms, joe pie, passionflower and swamp rose mallow, all bordered the pool where we sat, their wavy reflections surrounding the lily pads.

“Men in Armenia come together at times of loss and grief,” he said.

In warm weather, we met at a park and walked the paths through the adjacent forest. Here he told me about his brother’s Leukemia diagnosis. We aged as the years passed, and the walks became harder, so we sat on benches and watched the paddle ball and passing women. His osteoporosis had become more debilitating by then, and the walk back to the cars required rest stops. He always hugged me as we parted.

“I want you close when it’s my time,” he whispered.

At first, with the sound of passing cars, I wasn’t sure what he said. But after a minute, I understood. “Me too, my friend. Don’t assume I will outlive you.

The Prius was cooler then. When I looked back into the traffic, the rear-view mirror showed the back seat empty.

I arrived home, and from the driveway, I looked through the glare of the bay window. Someone sat in the chair adjacent to my own. But when I entered, the house was empty.

A few days later, I approached our deck from the side door. The glider was swinging as if someone had just been there.

About a week and a half later, I cut through Central Park after dark going to the subway, a dicey thing to do in New York City. The Park was deserted, but the lamps were on. I thought I heard footsteps behind me but saw in the passing shadows I was alone. In the breeze, I heard “If you need me, just turn around.”

Love isn’t erased, it remains as a reminder: you did live. You were once love. ~ Tyler Malone

A bit about Larry: Larry is an Assistant Professor Emeritus at the Einstein Medical School in NYC.