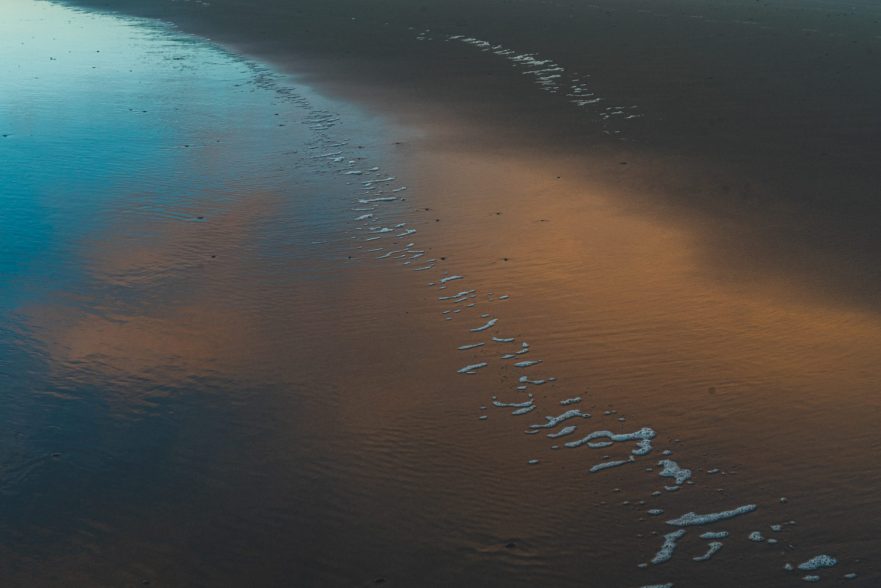 photo "In the Sky: In Us" by Tyler Malone

“Those clouds look really cheap,” Ryan Bendix said to me. One of the big stupid white dogs had wandered into the field across the street and we were waiting for it to wander back. Our boss told us to “go get him,” but the field was a swamp that time of year, so Plan A was just standing there and waving at the dog from time to time.

That was also Plan B.

Ten minutes ago we’d noticed the three clouds, not so much cheap as perfunctory, over the trees. They slowly moved to the east and out of sight. By and by three more clouds drifted in from the west, looking exactly like the first three clouds. “They aren’t even trying,” Ryan said. He subscribes to one of the “we are living in a simulation” theories of reality, specifically a simulation set up by somebody who stopped giving a shit long ago. The three clouds vanished in the east. It was about 15 seconds before they moved in again from the west, the same three clouds.

Well, perhaps not—I am not totally invested in his simulation theory—but I couldn’t see any differences. Eventually the big stupid white dog strolled back across the street and Ryan and I led him to the chicken yard he was supposed to be guarding. I should say “probably” strolled back, we “probably led him” to the chicken yard, and so on, because my memories are kind of dim and fragmentary on that point—I was still ruminating about those clouds.

A BRIEF DIGRESSION (OR IS IT?) ABOUT OLD CARTOONS

I was also thinking about (the clouds triggered it) old cartoons. The nightmarish black and white cartoons from the early 1930s[1]—the great Fleischer Brothers stuff, the not-so-great stuff from Van Buren Studios, and even the less-inspired hackwork from poverty row. Spaghetti-limbed dogs and pigs, bopping up and down to tinny proto-swing music, not even speaking but ejaculating “GAK!” and “BLEH!” at random. And as a budget saving measure, everyone would run past the same three clouds and the same three trees over and over. These cartoons were bizarre. They delighted the five-year-old me, but it never occurred to F.Y.O. me that they were supposed to be funny. Was I vaguely aware I was being shown clues to the *cough* Nature of Reality?

There’s a tree in that field we called the glitch tree because it seemed to be a totally different tree when you looked at it from different angles or distances. A big rotten Dutch Elm from directly across the street, some kind of a maple from 100 yards down the road. What it really is—‘really’ should have scare quotes around it, but that’s getting a little tedious—is a sycamore, instantly identifiable by the huge strip of bark hanging down from the upper trunk. Once we noticed the bark, it was a sycamore from all angles. “They realized we were paying attention and they’ve stopped fucking around,” said Ryan.

Or do I mean ‘Ryan?’ When you drop down the rabbit hole you might be vertiginous because you slammed into something or because you’re still tumbling down. You’ve got spirals for eyeballs and cartoon canaries tweeting around your head either way.

I’ve had some (not many) fairly coherent dreams with more or less linear narratives, and I’ve read very convincing essays arguing that our dreams are not coherent or linear no matter what we may think, they are all very fragmentary and incoherent. We impose our own narrative structures on these fragments after the fact because we are not really equipped to deal with chaos[2]. And I must admit even my most coherent dreams—the 2 or 3 I reworked into saleable stories[3]—had shifting locations suppressed for publication, and ‘narratives’ where I would bounce between observing everything from the outside, as if watching it on a screen, and actively participating in the festivities.

And this is almost precisely how my memories of real life feel, too. Getting into a shoving match in the grade school playground, including a very cinematic cutaway to a long shot from the second floor that couldn’t possibly be a true memory from that event, for instance. I remember getting off a subway in Greenwich Village in 1972 and emerging in front of The Pink Tea Cup, but (I discovered when I moved to the Village in 1973) there is no subway entrance within 100 yards of it. I know people who claim vivid recollections of watching a certain movie at The Park Theater in Caldwell, New Jersey (I was an usher), when that movie was released several years after the Park burned down[4].

[1] See “Bingo’s Initiation,” “Minnie the Moocher,” or even Disney’s Mickey Mouse cartoon “The Mad Doctor.” Did I say ‘nightmarish?’ These things are like animated fever dreams, with nary a hint of comedy. The ‘sight gags’ consist largely of crazy transformations—things that would be classified as ‘body horror’ 70 years later.

[3] See “The Cloisters,” Asimov’s SF Oct/Nov 2014. The tunnels connecting The Cloisters to various impossible locations were borrowed from a dream (the monkeys, too). Also the sprawling layout of the protagonist’s apartment in the original version. (The editor found the layout implausible & I changed it, probably for the better).

[5] Which was denied, although “Ryan Bendix” is pretty close.