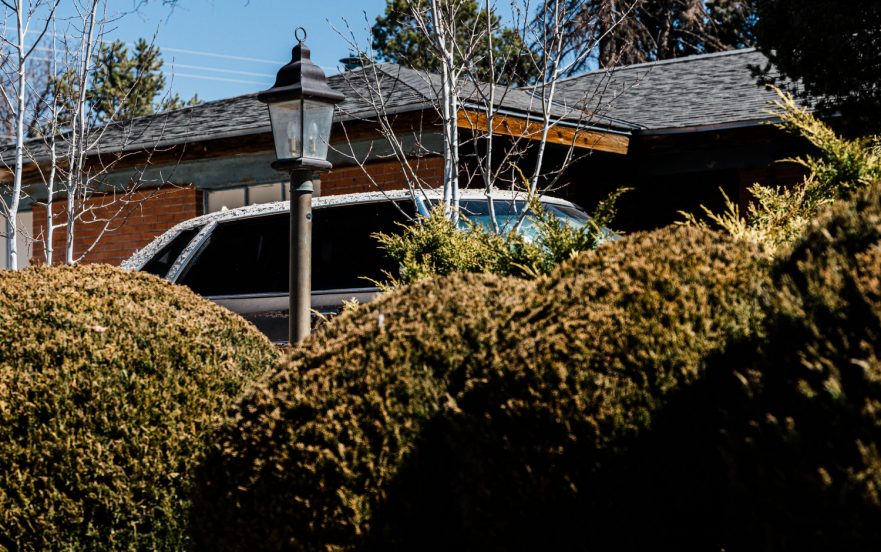 “Hey, look at this,” Alice said. “A hearse for sale. Five hundred dollars.”

“See for yourself.” Alice tossed her husband the newspaper.

An hour later, Herman knocked on the door of the mortuary.

“I called about the hearse,” Herman said.

Later that night, with a smile on his face, Herman drove the hearse toward Alice’s sister’s house for supper. He parked at the curb in front of a large two-story brick home. Ivy climbed the west side of the exterior. Large oaks shaded the east.

“Strange how Margaret’s husband, Edward, just up and died.” Herman scratched his head.

“Never mind. Hurry up.” With her dress riding up her thighs, Alice slid from her seat onto the sidewalk.

Pulling on the bottom of his blue Hawaiian shirt, attempting to cover his belly fat, Herman got out of the hearse.

The large front door swung open. Margaret, bathed in a fiery glow from a light in the entryway, stood with outstretched arms. Seconds later, she ushered Herman and Alice inside.

The aroma of roasting meat filled the air.

“Something smells good.” Herman rubbed his hands together. “Where do I sit to eat?”

“In Edward’s chair.” Margaret pulled out a chair at the head of the table.

“You heard my sister,” Alice said.

Margaret moved toward the sidebar. She opened a drawer and turned with a gun firmly planted in the palm of her hand.

Herman’s eyes bulged as he slowly lowered himself onto the chair. “You’re mad.”

Margaret motioned toward the sidebar. “Sister, get the duct tape. In the drawer.”

“His arms and feet,” Margaret said.

Alice secured each wrist to the arms of the chair. Then she knelt and fastened his ankles.

“Good.” Margaret putting the gun away. “Alice, sit next to Herman.”

Margaret lit the candles on top of the table, flicked off the lights, and walked toward the kitchen. She returned with a tray of food: prime rib, baked potatoes, and a green salad.

She sliced into the meat. “Alice, fix a plate for Herman.”

Herman struggled to break free. Muffled sounds came from under the tape.

“What did you say?” Alice cocked her head. Then she looked at her sister.

“Too much noise,” Alice paused. “Herman, did you know we like to play games?”

Herman tried to stomp his feet.

“Knock it off. You’re giving me a headache.” Alice jabbed her fork into the meat.

Wild flames on the candles drew moving shadows on the wall. Outside, the rain pelted the earth. Lightning flashed.

“Did that hurt?” Alice pooched out her lower lip, then pushed back on Herman’s forehead with her hand. His jaw dropped. She poured down the poison. He choked.

Alice freed his limbs. Then, with a thud, he hit the floor.

Margaret surveyed Herman’s body— at least a hundred pounds heavier than Edward. “Sister, should I take some flab off with the carving knife?”

“Move the hearse into the driveway. I’ll get a blanket.” Margaret said.

A few minutes later, Alice came back into the house.

“Did you park near the back door?” Margaret asked.

Alice stepped over the body.

After having him wrapped and tied, the sisters dragged Herman out of the house

Hunched over in the back of the hearse, Alice grabbed onto his ankles.

The windshield wipers were furiously swiping.  “Slow down before you get us killed,” Margaret called out as they drove.

“Do you want me to drive?” Margaret asked.

“When you get close to the mortuary, turn down the alley behind it.”

Max, dressed in black, stood rubbing his hands together under the dim light at the back entrance. “I have a fire going in the crematorium.”

“When does the countdown begin?” Margaret asked.

“It already has,” Max said. “Edward and now Herman.” He grinned. “How old was Herman?”

He stroked his pointed beard. “You’ve each earned twenty-six more years of life.”

The Devil rolled Herman down a dark, narrow hallway to the oven. The flames grew brighter as he neared the end.