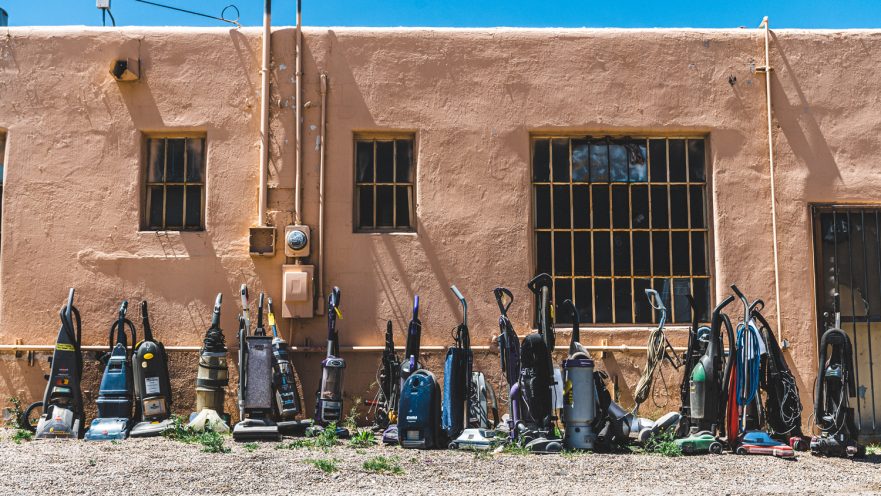 photo "Today is Going to Suck" by Tyler Malone

I clean psych wards. That’s my job.  Once a week, I depill. For four separate wards in the county. I go from room to room and look for pills. They’re everywhere. The patients hide them in plants, behind the toilet, under the toilet cover, in gum stuck under the toilet rim, in every single crevice of their mattress. I’ve shaken a mattress and practically had a meth lab fall out. They put so many pills in their pillows that I started to wonder if that’s how pill-ow got the name. They put them in blanket linings, in pipes, in their desk, under their desk, in cutout pages of books, under the rec room TV, in a hole in the wall, and too many other places to name. The problem, my boss tells me, is that if one of the patients discovers this, they could collect them all and OD. You could stack up all the pills I’ve found and form them Jenga-style into the full-size shape of an actual person. The patients put these things in so many places that it’s a game, to see how inventive they can be.

I’d clean their rooms and then I’d get to go outside. I’d go insane if I had to stay indoors all the time.

I’d walk home and think how lucky I was.

I met the girl of my dreams. She actually made her money from something even odder than cleaning up pills. She’d put on kind-of-offensive music and dance to it. It was stuff that’d get played on the radio, but with things bleeped out, except when she’d dance there’d be nothing bleeped. She’d do these cute little dances in cute clothes. She looked pretty while the music said some pretty offensive things. It didn’t match up. But she’d get a lot of hits. Not like millions, but hundreds of thousands. Which was enough for her to make money.

It’s better than cleaning up pills.

I met her outside. That’s where everything good happens in my life. Everything bad happens indoors. I was walking and she was walking and we both walked into a vegan restaurant and I held the door for her and they were busy, so the host wasn’t coming over to us so I started talking to her and we got along and I said she should eat with me and she did and I got her number, because sometimes life is magical.

We went on a couple dates, seeing a movie and going to a barbecue place, because we’re part-time vegans, and she came to my place and she said she wanted to do it. She honestly said that. Not sex. Not the f-word. It. Like Stephen King’s It, except not. The opposite of Stephen King’s It. The best it. The better, lower-case it. And I was nervous, because she’s a ten and I’m a five and so I felt like I needed to double my number, so I left her naked on the bed and she asked if I was going for a condom and I said I was, but I didn’t have any condoms in the house and I was nervous so I decided to grab the Viagra that a friend had given to me. He’d handed it to me like it was a get-out-of-jail-free card, like it was holy, like it was chiseled out of Aphrodite’s teeth. I put it high up on the shelf with my other pills, all alone, just sitting there, in an old empty aspirin bottle like it was its castle, these two Viagra he’d given me. They were a couple, married in that little aspirin bottle. I plopped them in, both, even though he told me to only take one, but I wanted both for assurance, so I did and guzzled down some water and went back to the bedroom. I told her I didn’t have any condoms, but she said come here and so I did and her body was terrifically beautiful. It was a plea to humanity. It was elegant and mountainous and burning and real and good. And I couldn’t get it up. Not even with Viagra. It was like the sutures of Hell had opened up and the world was laughing at my everything. And I fell asleep. On top of her. I remember how she didn’t make a good mattress, how her bones were annoyed with me, but I couldn’t help it. When I woke up, I went, groggy, to the cabinet and realized I’d taken two sleeping pills by mistake. The aspirin bottle was still intact. I’d grabbed the wrong bottle.

And I went back to work.

I gathered all the pills.

And pills stuck inside pens.

And pills tucked in window blinds.

And the pills transformed.

In my mind, I could see her dancing. Online. Like I’d seen. A hundred thousand times. And now I was alone, moving so slowly, from room to room. Piles and piles of pills in my hands.

We can know so much about what to do and what not to do, but choices, choices require actions. And actions are madness. ~ Tyler Malone