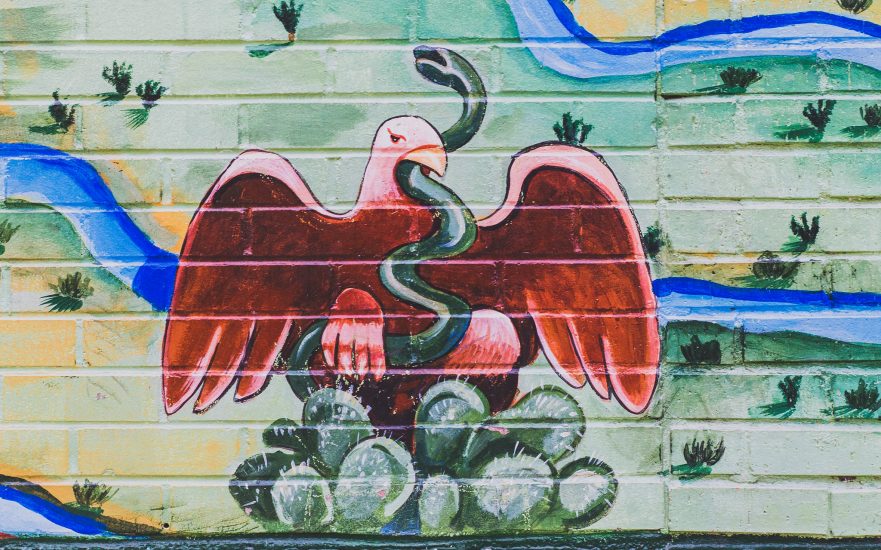 It used to be an abandoned storefront, squeezed between a blanched pancake house and a barrel-shaped drive-thru espresso bar. Workers cleaned up the place, painting it white with a new marquee before long-haulers arrived with boxes and palettes. We expected stuff that no one wanted. The malls of America were dying. We awoke to a snow machine, brilliant crystals of recycled water levitating in the air before falling to the hot asphalt only to rise again as steam, plus a Santa in red, white, and blue lederhosen, a children’s choir singing “America the Beautiful,” balloons everywhere, the pricey metallic kind with helium, and one of those inflatable puppets twisting its torso, arms shooting up to God, knees bending and prostrating. We drew together to see what they were selling. The LED blinked Froyo.

We formed a line and inched closer, sidestepping the tarry mix of bubble gum and seagull poop soiling the sidewalk, wafts of cool air escaping with each opening of the mechanical glass door, breaking our collective fever for a moment like a cold compress.

There was just one taste for sale—a mashup of vanilla, chocolate, and perhaps other familiar flavors, and it was beige like Desert Storm camo, pumped from a machine that looked like a front-loader in a coin-op laundromat, served in cones of communion wafer. It was an ample serving, one size fits all, proffered with a specialty bib to protect clothes from the drip, only it did not drip but rather desiccated eventually, at room temperature, to the consistency of Styrofoam, bits and pieces breaking off with a gentle snap, suitable for a midnight snack or something billionaire astronauts might eat in low-earth orbit, though fresh from the machine, chilled and sweet, the slurry was intoxicating. All you needed was to wait and pay. This was our democracy.

Those who’d tasted it hung around, celebrating with songs, jigs, and new friendships, encouraging others to remain in line—it was well worth the wait. The store stayed open late to accommodate the crowd. Halogen lamps were brought in, powered by monstrous generators. The noise was deafening.

As the lines grew, a minor industry emerged of youngsters holding spots for those too frail to wait in the heat. Life was all about the heat. It separated America into camps of those who believed the end was near and those who understood that Nature waxes and wanes, like the moon, only in longer cycles than scientists comprehend, but Nature comprehends. She asks us to warm ourselves when times are cold, and to cool ourselves when times are hot, and it was hotter than ever, so we did what was necessary: we went for the cold stuff, the beige salve soothing ulcerated tongues and parched throats, the sugar providing energy as we hoped for better days.

Our eyes were clear and sharp. We joined a frequent buyers club with stock options and wore the bibs everywhere, members of a rising nation. The best was yet to come.

He arrived in a clunky car belching smoke, stepping out with a stubbled face, straight from a mug shot, wielding a shotgun. He tried to hold the place up, but we pounced on him and his car, punched out the windows and ripped off windshield wipers. Someone splashed propane. We watched paint peel, tires melt, vinyl morph into spirals of black smoke, and we danced and howled around the burning wreck like banshees. The thug, whoever he was, ran away, never to be seen again. No one would—could—stop the flow of Froyo, certainly not the police, many of whom joined our ranks. Those who defended the store were promoted as captains, and we set about opening more franchises in other sleepy malls throughout the county, the state, the West, the South, the mighty Bread Basket, the Rust Belt, even New England, our brand gathering followers, day by day, each grand opening with a revival of strangers becoming One. We launched billboards and paid for TV slots, an army of bib-wearing citizens licking camo-colored soft serve, our songs and jigs viewable on the internet, but to unite with us you had to taste it. It made the sum greater than the parts.

And just when our movement seemed unstoppable, we hit a snag. Corn plants withered in the merciless heat, kernels no longer plentiful to churn out high-fructose syrup, then the sugar beets failed, followed by cane, and we were left with date palm, sorghum, and sugar maple— none of which was plentiful enough to meet the demand for sugar. Synthetic sweeteners were out of the question because that was not our brand. Froyo supplies dwindled, and like the crops, our franchises retreated, beginning first in New England, the farthest outreach, then the Rust Belt, the Bread Basket, the South, to the West, and within our state, California, county by county we backed up to the point of origin, down to just the one outlet nestled between the pancake house and espresso bar, both of which had long since shuttered because our global economy was in recession.

Those who say the end is drawing near gained ground with their own TV slots and biased talk-show hosts, a never-ending seesaw of power on the national stage. Then one night the long-haulers came and the lone store was emptied, the marquee and Froyo machine sold for scrap, and everyone who’d danced and wore bibs stayed at home, cooling off with ice-cubes, watching sit-com reruns, wondering when the next great thing would arrive while the naysayers took to the streets yelling never, selling nothing cold and sweet, only words that were hot and bitter, and yet their numbers grew, continuing to grow till their words were all that we heard, and all they said was The End.

Life is sweet, right up until it takes all your teeth. ~ Tyler Malone

A bit about Michael: Michael Kozart hails from Northern California where he works in a non-profit community health center. His story ‘Polaris’ won the Summer 2021 Sixfold competition, and his flash piece ‘Hock’ placed second in the Fall 2021 Flash Fiction Magazine contest. His work has been nominated for Best Small Fictions and been published in many literary journals including Into the Void, Every Day Fiction, MoonPark Review, and more.