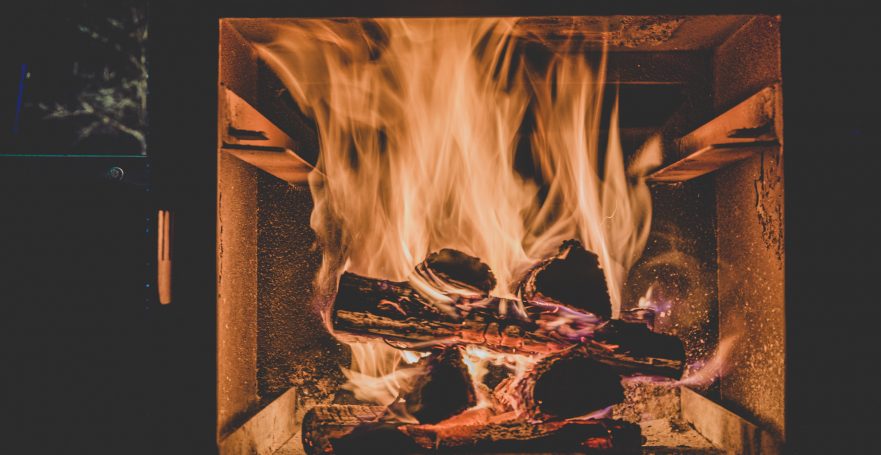 photo "Where What Burns" by Tyler Malone

Television imagination remains untwisted in summer while our dad says, “Stay with grandmother. It’s going to be hot again, way into the hundreds, and while she’s not quite there yet please just stay home.”

As Dad shut the door, fervid outside air rushes into the house where hundreds of colorful candle statues with slick, wet-looking perfume bodies wait for fire but only know deep heat. The dusty doughy sentinels share their dry fruits as the closing door brings in a fresh, curious smell: road-laden boiled tar from fresh resurfaced streets.

By the door’s grimy yellow frame, the car key rack hung crooked. Bless the road is etched in wood above a single Bible-black key for a once black but now rusted beast resting in the front yard. The key hangs hot, ready to twist. My younger brother looks at me as I grab the key and yell into the stale sweat throat of our home, “We’re going out!”

Carpet fibers burn shoe soles as we walk outside, away from our grandmother’s flattened bed sheets, her thin summer gown, her window’s pear tree offering ripened shade and rotten fruit, a television close to closed eyes and a landline far from offering reaching hands. When it rings, sating thirsty, evangelized prayer-filled air, someone gets their wings to take to the sun.

Unlit candles all around her, only one wick was ever lit with our grandfather, and another was never lit again.

Gravel pockets fill with recently slapped tar mounds trace the painted grave of our world. The house’s windows, wide open residence, invite fiery air inside to live forever and keep our family company as the key brings the beast’s engine to life housed under a red rust hood, shaking in thrashes like a drowning pit bull. Oil drips like Christmas candle wax to church shoe-covered toes, looking for soil with no plan, only a road. Same as us. Sweat runs from elbows to cracked tan vinyl seats smelling of generations of direct afternoon sunlight infernos.

“Where are we going?” asks my brother over unmuffled combustion. The only ways from here are left, right, or stay stuck.

“Left,” is all I say. My brother knows where that leads, into creation with no one to listen to or grant us serenity coupled with no soundtrack or radio noise as the dash is a vacant spot that spills engine air into the cab. Elephantine engine fumes, windows peeled down, rushing air pops our ears as we roll past discarded boats in dipped dead lands where waters rarely come naturally to fill feed tanks dug for mud and snakes but are meant for cattle. By fields of feed tanks looms a billboard for a local business, The Candle Factory, the county’s largest wick and wax enterprise, a zoo of unmelted life, texture matching skin sweat.

It is a cop, a slow one heading our way. She’s encapsulated in black and white Kevlar with a perfect round face—a bright pumpkin with a pump action. The beast’s speedometer isn’t committed to accuracy and no stop signs lead us, so I match the pace of passing fence posts that we’ve driven past our entire lives as police creep slow no matter the road, their patrol car shadows not cooling a single gravel pebble stranded under sunlight deprived of any hints of snow dreams, knowing only curses for flat tires as the only air for miles is in lungs.

The patrol car disappears in shaking rear view glass when we roll to a stop under The Candle Factory billboard. It’s straight to our right in four miles—wax sculptures, slow moving geriatrics walking as fast as statues, rock candy sugar, and air-conditioned corrugated walls. The beast rests in rumbles on a shoulder of grass dead yellow since every April we ever knew.

“Let’s just keep going,” I say as cows trot towards us, their udders, bellies, tongues jolting as they run for feed we don’t have. No food, IDs, or dollars, just leg sweat.

“Didn’t the army at the fort blow up a bunch of cows around here with tanks?”

“That’s the rumor I heard last summer. Look at these survivors, still in love with us and this dirt.”

Among the beast’s idle bursts, cows begin to sing in low hungry moans while I put my palms on the wheel and hit the gas.

I press into the steering wheel, but the horn doesn’t work.

We settle into routine rumble and look ahead for miles and trace thin trails of rising sky-bruising lines etching themselves into southern daylight. They grow thick, bulbous. We drive towards what rises in the horizon and breathing only increases when my brother sees red lights racing behind us. “Pull over!”

On the shoulder, again the same police car passes as its sirens tow firetrucks and EMS vehicles. Cows run from the road while smoke palms the entire globe in fresh black blooms. My brother leans forward as hot air from the dash rushes in with a toxiferous air as smoke blooms towards us loudly entering a volcano’s mouth as dead grass accepts its fate and burns with all its blades.

Volunteer firetrucks already assault the The Candle Factory’s roof with hoses. Wax rolls out the building’s side like a doe hit by a truck, but its unborn fawn still kicks. A melting rainbow slides through the parking lot and covers wheels of cars belonging to employees still inside, unready as wicks for fire.

“We need to get back home.”

My brother harshly coughs candle smoke. There are no more emergency vehicles or county water left as we face our road home. From where we’ve come, smoke splits over miles ahead. Black birds matching dark skies intertwine with moving wind above our home, gliding halos in burning air.