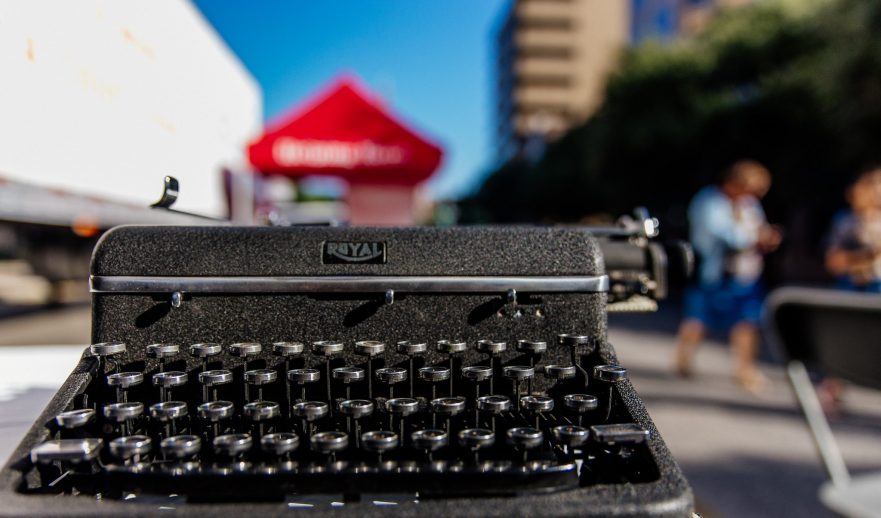 photo "Where It All Begins" by Tyler Malone

Back in the 1950s, when Brooklyn Tech was an all-boys high school, I volunteered for the post of lunchroom table captain. Little did I know that this post would ultimately change my life.

We sat in rows of five or six tables in a huge room. About thirty of us sat in each row. We would pass along our garbage to the two table captains, who would drop it into a large garbage can.

Why would anyone volunteer for the job of table captain? None of us had dreams of one day becoming a garbage man. The plan was for all six thousand of us to one day be engineers.

I soon realized that it was more likely that one day I would indeed become a garbage man than an engineer. We had to take five periods a week of woodworking shop as well as six periods of mechanical drawing. I was arguably the worst student in both classes.

Lunch would have been a great break from the rest of the day, except for one inconvenient fact. Three or four times during the period, there would be loud bursts of laughter throughout the vast lunchroom. And one day, everyone was laughing at me.

These incidents always involved the disposal of our garbage. Some guy would discover that his books were missing. They had probably been intentionally passed down the tables and dropped into the garbage pail.

This was not too bad, because you could dig into the pail and fish out your books. Sometimes, you’d find your books under your seat, or under one of the tables.

But what if after looking in the most obvious places, you still couldn’t find your books? Well, then you’d have to look in the ultimate hiding place.

A man came from table to table, dumping the garbage from individual garbage pails into a huge canvas dumpster. And so, you had to dive into the dumpster to search for your books.

If you still couldn’t find them, your only hope was that the guy who had grabbed them was kind enough to tell you where they were hidden. If not, then you were completely screwed.

Having suffered the ultimate lunchroom humiliation of searching for my books in the dumpster, I immediately filled a vacant table captain post. As the guardian of our garbage pail, I knew my books were safe.

As you’ve probably surmised, being a table captain was a whole lot better than being a dumpster diver. But on the other hand, it was no great honor.

Seven years later, I had my next experience with mealtime garbage in the army. After every meal in the mess hall, each of us would carry our tray of dishes to a couple of garbage pails, and scrape off the edible garbage in one pail and the rest in the other pail. There were no table captains.

Thinking back to my lunchroom experiences in Brooklyn Tech, I realized that when you’re feeding large numbers of people, you can run things much more efficiently if you’re well organized. Little did I know how this discovery would ultimately change my life.

Over the years, I had been to countless dinner parties, none of which were remotely similar to my dining experiences at Brooklyn Tech or in the U.S. Army. The spirit of cooperation and self-service was almost completely missing. So, I thought to myself, how could we, with almost minimal effort, run a more efficient clean-up operation?

I then decided to take it upon myself to organize the after-meal clean-ups. Understandably, this initiative would not always be very well received by the hostess or host, but I was confident that they would soon be thanking me for running such an efficient operation.

I would arrive at a dinner party with a twelve-inch high canister and a medium-size garbage bag. After everyone finished the main course, I would pass the canister around the table, asking everyone to place their used utensils in the canister. Then I’d come around with the garbage bag, asking each guest to scrape off their scraps into the bag.

You would think that the guests, not to mention the hostess or host – would all be thanking me for this efficient table-clearing operation. Surely, I had come a long way since my days as a table captain.

But surprisingly, I must have been too far ahead of my times. In fact, I am now rarely invited to dinner parties any more, and even when I am, I’m asked not to bother bringing my canister and garbage bag. On the bright side, I had never thought I would ever miss my days as a table captain.

We’re  not always looking for friendship or love, sometimes we’re looking for someone to carry our trash. ~ Tyler Malone