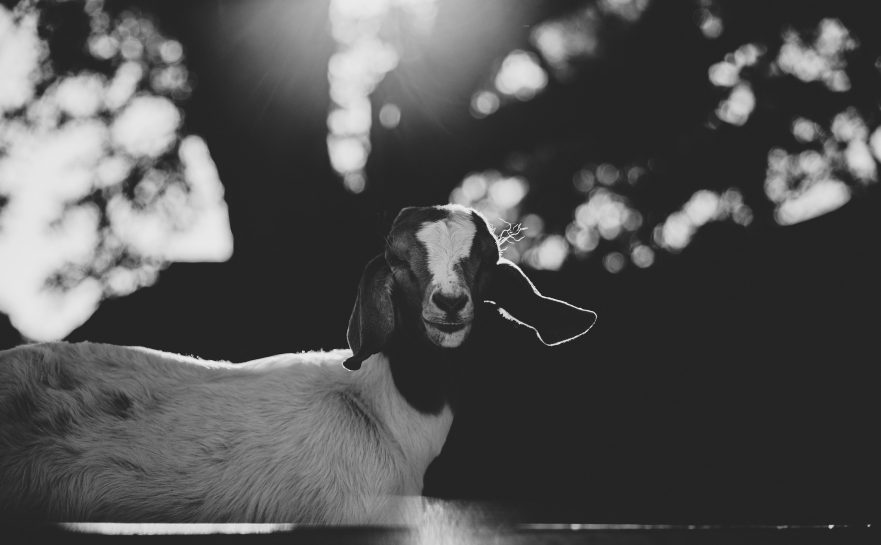 photo "Got Your Goat" by Tyler Malone

There was a thick smell of fresh manure while I was prowling around a native farm getting information for this article. The thought of the foul air surrendered to the aural of a mooing cow which drew me into the barn. I edged closer to the animal with its head locked between iron bars and its teats connected to a milking machine. The cow’s moans topped the din of the milking contraption and translated into human words:

These are bad times for animals, she says, especially before Christmas. That’s because humans consume more meat during the holidays.

A chicken cackled, humans think of themselves as vegetarians when they eat white meat. They take us away daily. If we don’t produce our quota of eggs, they send us directly into the Rotisserie.

The cow bowed its head in recognition of what was said and continued. The animals pay for all the “special” human days. We dread Easter. Oh, those innocent lambs. It breaks our hearts.

The pigs oinked out verses that translated to human talk, which said, they call us dirty animals because that’s how they treat us. We didn’t choose to live in this filthy pigsty. And we have no future other than strips of bacon. The sows live to watch their piglets massacred, one litter after another. But for us, they aren’t litter. Humans are blind to the words that betray them. Look and listen, it squealed.

The cow mooed, and sound became words: All enslaved animals suffer physically and psychologically, she said. We tolerate continual abuse and heartbreak. The farmer takes our calves away. I spoke with a mother who watched her son slaughtered before her very eyes, then she was led off to be milked. Can you imagine the horror?

Males are meat; females are milk.

And they say we are insensitive, that animals have no feelings.

The cow bowed her head bound within the iron frame and let out a sickly moo. I left the barn to the animals locked in stalls and cages and went outside, hoping the air would be fresher.

Rats scurried over cow dung piled in a heap, picking out corn and other undigested vegetable matter. My curiosity satisfied, I stride to the green plains.

The farmer’s tractor sounded nearby, where he was working the hayfield. Whiffs of cut greenery cleared my nostrils. Behind the hay was the cornfield.

The din of the harvester increased as it rolled closer in my direction, harvesting the corn stalks and spitting out its kernels into the bed of a large truck that followed it. I sneezed from the corn shreds floating in the air.

When I opened my eyes from the sneeze, a crow hopped in front of me. It cawed, and the sounds it made became words with meanings.

Such a waste, it said.

I should know,
I’m the crow.
We eat all the leftovers.

We are fishing for nutrition:
Sent, to clean up the environment.

And what are you here for
My human foe?
To chain the cows
Row by row?
To rip chicken’s legs,
From thighs?
And kidnap piglets
From their mother’s sides?

And what of all those lives lost
To what you call
the human holocaust?

Yet you ignore the daily fate
of the animals on your plate.

The holocaust is animal.
One day it will end.
When peace ensues,
A child may ask you:
Where were you, grandpa
During the Animal Holocaust?

Are you prepared today,
With what you will say?

Clean up your mess.
It’s all for the best.

The bird flew, and the stench of manure returned. The air became thick with shredded corn stalks, and I sneezed uncontrollably.

I questioned as I sneezed. Why don’t humans eat the food they grow? Must we raise slaughter animals?

Soy, wheat, corn, beans, and rice grow well in the world’s green plains. Tofu, seitan, and soy cutlets take the place of dead cows, pigs, and chickens. And those foods are healthful, while cadavers should be taboo.

I wish to confide in the absent crow: eating meat is a dirty habit I picked up as a child. Instead, I resolve to prepare myself for the inevitable questions:

Where were you, grandpa, during the Animal Holocaust?

Did you ever eat meat?

We begin by admitting our mistakes: the animals have feelings and are entitled to freedom.

The holocaust is happening now, all the animals tell me so.

Remember me, I gave everything for your life: my past, my future, my body. ~ Tyler Malone

A bit about James: "I’m an American teacher and published author living in Italy."