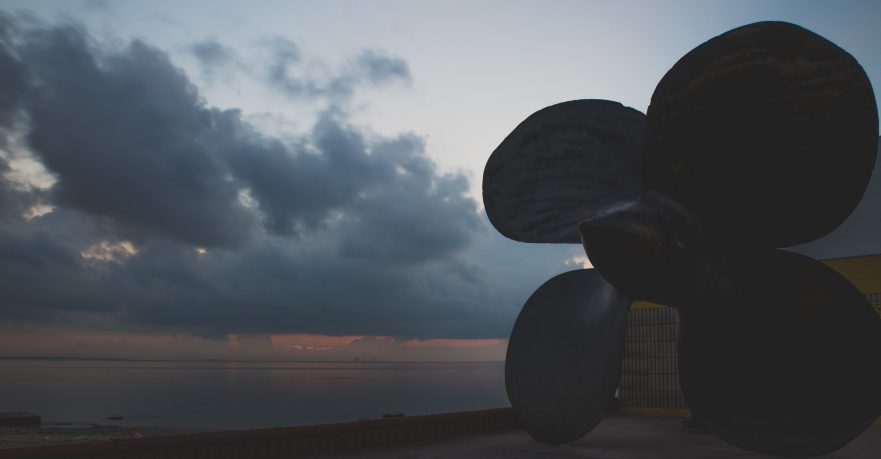 Sailing the chill waters of the Atlantic Ocean, the cargo ship MS Harper is the only speck of brightness in the vast moonless night. Floodlights illuminate the shipping containers stacked on top of one another. Some scuffed, some dented, all of them with their rectangular space occupied by a brand-new Korean car.

Florescent lights shine through the bridge windows, while inside the bridge, the night watch is convinced that they are the only ship for miles. Harper’s radar tells them so. It detects nothing. But that’s understandable, as radio waves have never once bounced off the supernatural. The two exist in completely different realms.

A shipwreck ploughs through waves, following the trail of churned water from MS Harper’s propeller. Its pitted, bottom hull and keel peeks above the waves, rusty rudder as menacing as a shark fin. Below the waves, a school of tuna scatter to avoid being swallowed whole by the broken windows of the shipwreck’s upside-down bridge.

No hesitation, no mercy, the shipwreck attacks its prey, ramming the tip of its bow into Harper’s starboard side.

The collision knocks the night watch off their feet, throws the rest of the crew out of their bunk beds.

Metal bites into metal, a shower of sparks brighter than the stars up above. A metallic high-pitched screech, the only voice for a dying ship.

The shipwreck’s objective is reached, Harper’s hull has been breached. Now the hunter can move on, seeking new prey.

The bow dips below the ocean. The stern rises into the air. Sea water sweeps through corridors and cabins, converting the living quarters into a submerged coffin that disappears under the waves, the bow pointed directly at the seabed somewhere below. Soggy corpses of the crew float through Harper’s interior like astronauts in zero gravity.

The shipping containers tumble through the watery void, each one with a tail of air-bubbles, more imposing than the gaseous tail of a comet. Down, down the containers go, faster than the fallen angels plunge into Hell, taking with them cargo, capital gain, delivery goals, all of the ship’s ties to humanity will be forever lost at sea.

Water seethes as Harper rolls her great bulk, neither sinking nor surfacing, neither here nor there. How a cargo ship could slip between the cracks of physics, only the supernatural would know but never tell.

Inside the bridge, the corpse of the captain floats towards an instrument panel, her swaying hair slithers around her scalp. The pale light from a screen casts a faint glow upon her bloodless lips and broken veins scribbled across her bloated face.

Not even a stray prawn, swimming into his gaping mouth, could prevent the pilot from taking the helm. The shipwreck starts to rise until her bottom hull and keel resurface. Like the gills of a fish, ocean water flows in and out of the jagged gash in her hull.

Shipwrecked Harper, and her undead crew, sail the Atlantic Ocean. All that water, stretching to the horizon in every direction, is now her hunting ground.

A bit about Glenn: Glenn is an Australian who works in community aged care. Fantasy and Sci-Fi are his favourite genres to read and write about. This time, he has chosen to step out of his comfort zone and have a go at some horror. Glenn’s stories have appeared in Storgy, Literary Yard and Sci-Fi Lampoon magazine.