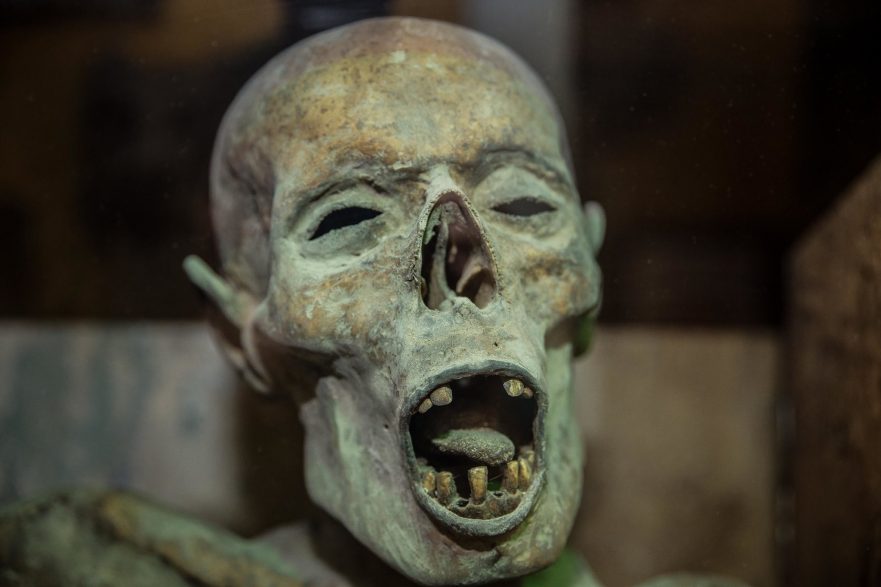 photo "A Face Mummy Could Love" by Tyler Malone

For dad, and his wild heart.

Once when we were children, our father kidnapped us from our mother to take us across the desert. His wood-paneled station wagon roared through El Paso, New Mexico, and Arizona. I played with my prize toy, an E.T. plush, in the back of that car under a white sheet. In school I had been called E.T. because of my long neck and big eyes and ears. My plushie made me feel like I at least had one other alien weirdo like myself to go through life with. I don’t remember where exactly Dad was taking us but one of the strangest experiences of my young life occurred during that exodus. New Mexico and Arizona offered up all sorts of desert oddities with enticingly weird road signs, but we never stopped for any of them—save one. There was one road sign that snared even my father’s attention. In big letters it said: COME SEE THE THING! As we got closer to the area of the roadside attraction, other signs called to us like desert sirens. WHAT IS IT? THE WEIRDEST THING YOU’LL EVER SEE! YOU’RE GETTING CLOSER TO THE THING! My excitement level grew each time, and my dad’s interest was clearly piqued. My little sister gave not one bit of a damn.

When we got there, the first thing I noticed about the tourist trap we’d currently planted ourselves in was how small the building was. Inside was a host of desert oddities, most of which I wish I could still remember. To summarize in a general sense: two-headed snakes, animal skeletons, fossils and feathers and arrowheads, oh my! Everything in the room revolved around this mysterious slab encased in glass that sat in the center. The main attraction! But the way things were placed, from the moment you set foot inside you went around the slab first while being eye-grabbed by smaller but weird and interesting items until you walked a circle around THE THING and had nothing else to look at. I turned around first, hearing gasps and whispers from the other families that had been ensnared by the enticing premise of mystery in the desert and good billboard advertising. At first, I didn’t understand what I was seeing until dad turned around and said it. “Oh, it’s a mummy!”

But it wasn’t just a mummy. It was a mommy, and she wasn’t alone. THE THING wasn’t just this female mummy laid out for all to see. THE THING was a mother and her baby that had been mummified by the desert. I know for a fact I said, “Wow” and “Whoa” a bunch of times. Dad held baby sister up in his arms so she could see. We were really little, so I doubt she understood. But I understood enough. The baby mummy was so tiny, it must have been a newborn. It was placed beside her, near her feet—her dark outstretched hand still longing to caress and comfort it one more time. As we left with no souvenir but memory, I kept turning it over in my head. The whole time, I never thought it would be people—mummies for that matter. I wondered how long she and her baby languished in the desert, so detached from humanity that they were destined to become inhuman—THE THING. A roadside attraction, an oddity, a monster.

Hell is a desert

that we take our children through,

home is a mirage.

Not long after the pinnacle of our desert adventure together, our mother found us, having raced through the desert like a bat out of hell. She admonished our wild-hearted father, snatched us away from him, and flew us back home on a zephyr of red-headed rage. I would go on to have a complicated relationship with her, to say the least, but I know if I was a baby at her breast again and she was lost in some scorching hot desert, she would do whatever she could to keep me safe—her instincts as a mother purer than her motivations as a person. Through all my many trials in life, I never forgot about that odd experience I got to share with my dad and sister. That tiny portal to another dimension, that trailer from the twilight zone, is surely gone now, and likely has been for years. I sometimes wonder where THE THING is, and I hope that the mummified mother and baby are still together, somewhere where prying eyes can’t see, somewhere safe from those who would take it for themselves. My father would take us on other fun adventures but never again so far from home—never so strange a place. But in my heart, he waits for us, his spirit standing alone on the sands of time, a desert without end, an hourglass ever turning. The next great adventure awaits on some distant plane, a dimension where we can escape together with no threat of being separated ever again.

Adventure awaits! But so does the end, and the end will live on. ~ Tyler Malone

A bit about James:

James Barrett Rodehaver, also known by his nickname, Bear, is a young poet living and writing in Dallas, Texas. An Alabama native and lifelong poet (writing since the age of seven), Bear is a prolific, engaging, eye-opening writer whose verses show levels of bravery, humor and depth far beyond his years. His collection of poems, Strangely Wonderful, published in 2013, can be purchased through Amazon Books or through Penhall Publishing: Strangely Wonderful