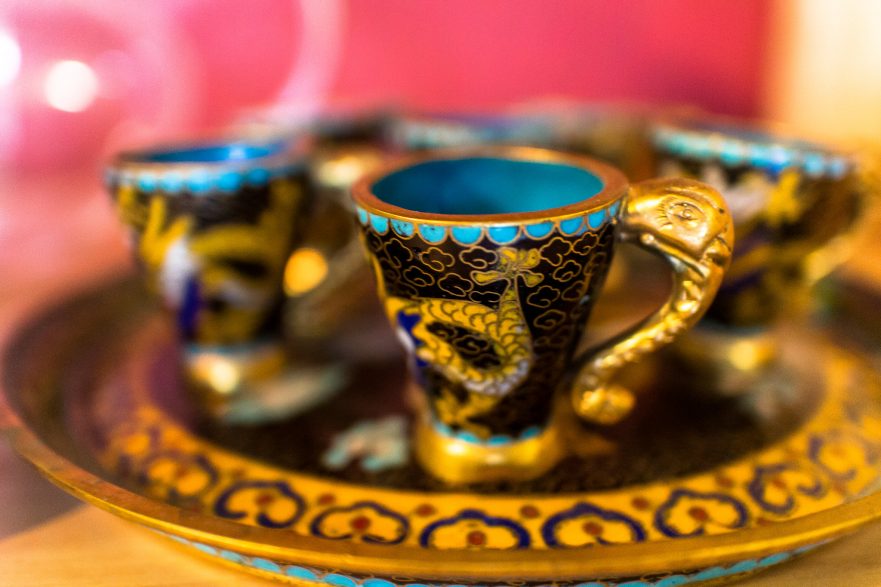 I have a full blown tryst with my typewriter on a day the sky hangs upside down over Kovalampatti, shabby as the underside of a dress, seams and all exposed.

I’d moved into the narrow neighborhood a fortnight ago with a mission, and have been typing by the window, twitching in despair at the mounting pile of half-finished articles. Mr. Pierre, my editor from La Saveur magazine, only the greatest culinary magazine on earth, has such high hopes for me, all of which are likely to dash from the pinnacle of my writer’s block.

“You’ve got two weeks, Gervase!” he had squealed over the telephone from Paris. What does he know of the innumerable mazes of Kovalampatti, the dust, the grime, the heat and its hooligan people, making a fool out of a foreigner, and words that mysteriously disappear from the head of an award winning writer?

This is the context. All of Kovalampatti gathers once a year to prepare a grand feast for Kamikkadevi, a local goddess, a curious amalgamation of a lioness and a woman, kali in a woman’s body, a body with opulent thighs and immaculate breasts. It goes that the feisty goddess went hungry for twelve days whilst fighting a demon, set out to decimate Kovalampatti. After having wrung his neck like a chicken’s and saving eighteen thousand nine hundred lives, all she asked was to be fed. With a lineage of unapologetic eaters behind me, which includes my grand-mère, who at seventy-nine, demolished a whole roasted duck, skin, bone and beak in twelve minutes, and mother who polished off all leftovers at the dinner table each night. Guests or no guests, I wasn’t surprised by a woman’s extraordinary appetite, nor baffled by her choice of priorities. In fact, what made both my heart and man parts swell for the first time, was a bit of béchamel sauce that spilt down the edge of Genevieve’s plump mouth and onto her greedy but incredibly pretty arms. She was stuffing down the last of my mother’s baked zitis. We were fourteen.

Now, at thirty-seven, in recollection of that surprisingly vivid memory, I cannot tell apart the reason for my bewitchment. The silky smooth béchamel sauce oozing out of them baked zitis, the sweet dimpled Genevieve or both. At the cost of my confusion, I remain the most eligible bachelor. I travel the world alone, sniffing, tasting, touching and most importantly writing about food. After the Pere food festival in Hawaii and the historical pickling ceremonies of the HunJun cabbage in China, Kovalampatti beckoned me.  I charged at it with one eighth of Indian blood coursing through my very French veins, blood from an unsuspecting Thamizh house maid impregnated by a pompous French Lord, or a humble French footman, I’m not sure which. Grand-mère, who had previously had three glasses of sherry and was mildly confused, choked on a fish bone while telling me the story, and never made it to clarify. Those were Imperial times, and men couldn’t keep their wants inside their pants. That much was clear.

As homage to the Indian fraction that ran in the family, Mother, once in a while, tossed cumin seeds in hot sunflower oil and roasted red chilies from the only Indian bazaar on Kleber street, to make thoggayal, or kuzhambu, or one thing or the other that turned our otherwise well behaved kitchen into a bedazzlement.

What is elusive, is that my ancestors were thoroughly stingy in passing onto me all of their culinary sensibilities. I didn’t know how to cook. I watched and followed recipes with all my heart, but the spaghettis came out soggy, the sauces were weak, the crusts never held together, and the seasoning was always off. Instead, at age eleven, I was compensated with a talent for words. Once, while on this futile pursuit, I ended up bellowing around the kitchen from a stray peppercorn that had spluttered into my eye. I swore to myself that I’d never pick up a spatula again, but soon after, I picked up a pen and wrote about it. About the hot steamy rasam, sore eye, peppercorn and all. That sealed it.

Between investigating the Kamikkadevi feast and toiling at my typewriter, I spent considerable time indulging the one eighth of my Thamizh ancestry, by exploring its local foods.

Noise is everywhere. Bubbly tops of coffees are slurped, leftover curries on plates are lapped up, fingers are licked, lips are smacked, and for the first time in my life a long deafening burp ensues out of me in public. I had just gorged on an entire dish of chicken varraval. I am aghast. I go red and I lose face, but my host is bubbling with joy.

“Ah, so my meal was good, eh,” he declares. Indeed, it was excellent chicken and my burp had established that. Noise means something else now.  Noise is celebration.

The techniques are mind boggling.

“See…,” says a friend who owns a Thanjavoor style restaurant. He points at his top chef, a stumpy fellow with a magnanimous smile, who is dicing carrots at lightning speed, spooning copious amounts of ghee into a pan and shaping dollop sized batter into impeccable panniyarams, all at once.

“He came here as a scrawny chap who sliced off his thumb in his first week of chopping turnips,” continues my friend. I look at his magical but mutilated hands and feel a shiver down my spine, and imagine a finger floating in my turnip soup, and shiver again.

“And now, look at him go,” says my friend beaming. “He can chop a three feet snake gourd perfectly well with his eyes closed and all his nine fingers intact”

I scribble frantically in my little notebook. It is nearly full, and bursting with possibilities that do not translate onto paper.

Fine dining might not be at home, at a supper table, or in a dish. It could be on a page, what’s boiling inside spilling onto the table, a feast for all. ~ Tyler Malone

A bit about Prarthana: Prarthana JA, the author of How Tea Tastes in Kovalampatti is a stay-at-home mom, who has perfected the art of cooking, typing, and exercising with one hand, while holding a toddler in the other. She’s a former Corporate writer, who quit her job to finish her novel. Which she will. She has written screenplays for the award-winning short films The Wedding Saree and Spiral. Her short stories have appeared in The Indian Periodical and the Emovere, an anthology.