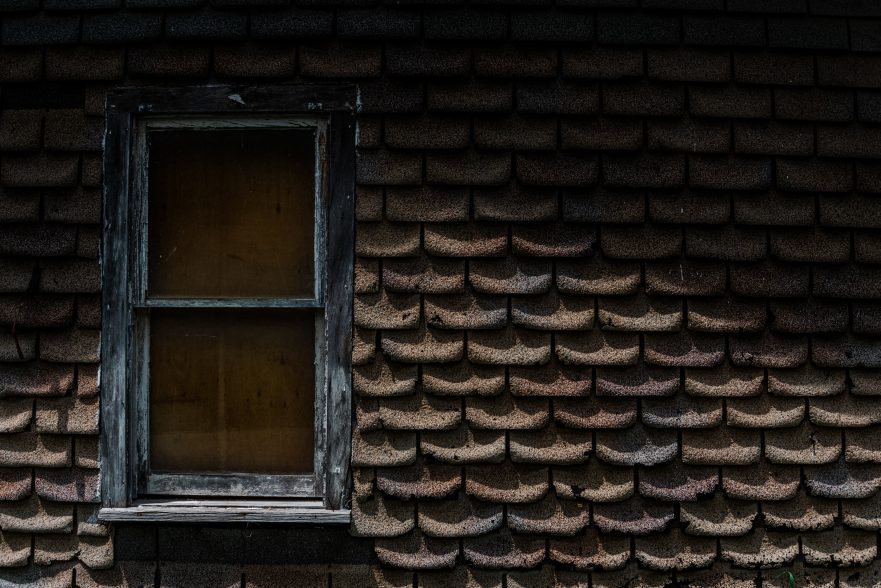 I saw her again today, following me. As I turned right on the corner, from a left-side glance, I saw the shiny blue of her shirt. First, she waited a few beats, hoping I wouldn’t notice, then continued slyly walking.

Why is she following me? What does she want?

She’s been following me for years now.

I didn’t feel threatened or worried. Maybe she had something to tell me.

A year ago, we came face to face at a drugstore on J Street. She trailed behind me, as she usually does, stopping when I stopped, then moving when I started walking again.

I then suddenly realized I’d left my keys on the counter at the drugstore. As soon as I opened the door to leave, I turned back around, nearly bumping into her. And there she was, a look of utter shock on her face.

“Sorry,” she replied, her hands up to her face, perhaps attempting to disguise herself. Trying not to make too much of a deal about the whole thing, I rushed past her. But not before I got a good look at her face. She looked a little like me, like she could be my sister. Her hair was black, like mine. Her eyes blue. Her cheekbones high and sharp.

But I didn’t have a sister. This stranger, this person, merely looked like my sister.

She was very careful the next few weeks, trying hard to evade me. But I saw her every time, even faintly from a distance. It was even funny sometimes. Once, as I ran down the elevated train stairs, I saw her on the street level a block away, as if waiting. How did she know I would be coming down the stairs that very minute? I had worked late that day, coming home at an unusual time. When I made it to the bottom of the stairs, she scurried away, moving quickly past standers-by. I could see the blue of her shiny shirt recede into the distance, like a fish swimming away, wiggling, causing commotion, air-bubbles trailing her escape. I laughed aloud. And even from a few blocks away, her face just a dot, I could still detect a smirk. We both had a good laugh due to her carelessness. I could hear her chuckling from blocks away.

I had been at this for years now. I was patiently waiting. Perhaps I could wait forever.

Then, early one morning, I left my apartment. It was still dark. I took a good long look down the street. Was that her? Yes, of course. Her blue, shiny shirt glimmered even in the dim light of the early morning. But I kept my cool. I hesitated for a minute. Then I continued walking. Holding my briefcase tucked under my right arm, I walked briskly to the train. It was a cool morning, the air was crisp and clear. I felt as though I could see everything all at once. I could see the most distant objects in places I couldn’t at first identify. I saw a magician holding an impossible parallelogram, his hands both inside and outside its frame. I saw a school of salmon rushing down a river. I beheld individual flowers trembling in a gentle breeze high on a mountain. Then, as if on another page of a book, there were caribou running from wolves. Now I experienced a star live out its entire lifetime and die a solitary but noble death. When I breathed, oceans rushed in, galaxies folded, collapsed and were reborn from cosmic dust.

Not knowing what else to do, I ran towards the woman.

This time she couldn’t escape.

“Who are you?” I demanded, out of breath, excited.

She tried to look away.

I again shouted my question to her.

I moved even closer to her.

Squirming, she couldn’t move away, though I could swear she was shrinking in size, as if trying to disappear.

Now, standing almost directly in front of her, I could see her face better. She didn’t just look like me. She was me. When I held my gaze upon her, her face was absorbed into my vision.

Then she was gone.

Shaking my head, trying to compose myself, I climbed up the stairs of the station. I felt like I was now walking back in time to a day before. The stairs, once a solitary row of steps, were now crisscrossing into other dimensions. At that instant, I knew that the stairs led to different times, different places. Looking at the faces on the station, I could see that everyone was me, although none of the faces looked like mine. All of the faces sighed in unison. I yawned and we all yawned. We were all caught in a moment when the paths and places of the universe— the multiverse—were revealed. Like I was staring into the reflecting walls of a diamond.

Then, in one spectacular second, the diamond shattered. Pieces of history floated around me, like asteroids. An old man dying alone on a bench. I could feel his hunger. A female neanderthal, her eyes moist and red, slowly bleeding to death from the wound of a tiger. Her breath is deep and hot. The cries muffled in her chest. I saw beings that didn’t look like me but were me. Fish, birds, souls that looked like radio waves.

Then, in another instant I was back on the train station stairs. I stopped, swiveled my head around. It was totally silent. Not a person around. Now I could see the Q train rushing into the platform. Anxious to make the train, I reached in my pocket to grab my train card, swiped it, hearing the conductor announce the stop.

Now inside the train, my chest heaving, I sat down in a seat.

While worrying that I would be late for work, I also contemplated why I was going anywhere at all.

Here we are, but just right now. Soon we’ll be somewhere, something, and someone else. ~ Tyler Malone