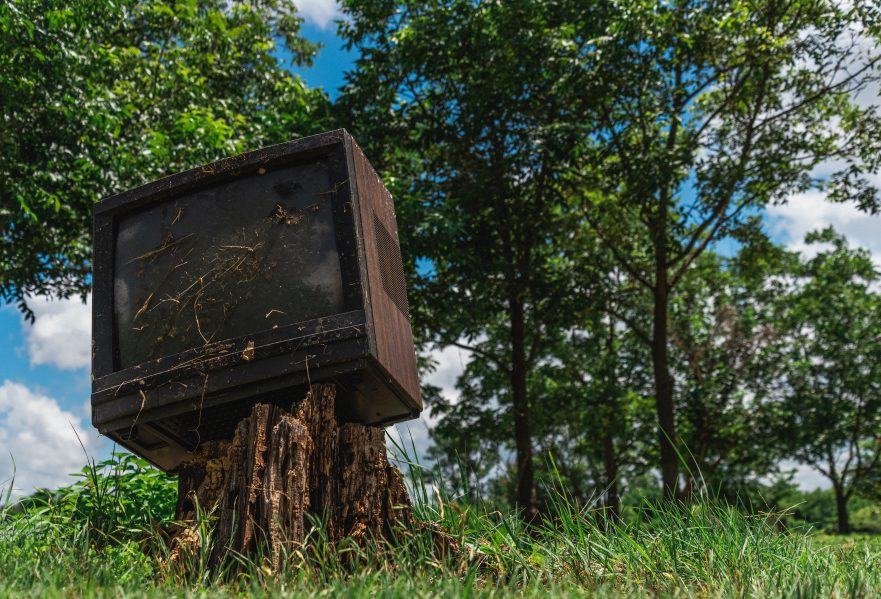 photo "Black and White, Green on Blue" by Tyler Malone

My uncle Charlie only ever saw things in black and white. He had never owned a colour TV. He said the colour TV license was far too dear. I didn’t even know anyone still believed in that shit. Was there such a thing as a black and white TV license in this day and age?

To me his TV resembled an engorged mosquito that had sucked too much blood and was about to burst. TVs nowadays are all flat. Like a picture. His had buttons like a tailored suit. There wasn’t even a remote control.

“Who needs a remote control? Makes everyone lazy. Sitting there scrolling through thousands of channels and still finding nothing to watch.”

Though my Uncle Charlie would end up sitting watching whatever was on after he’d seen what he wanted to see, because he couldn’t be bothered to get up and change the channel.

“Don’t you think the snooker would be better in color so you can tell what colour the balls are?”

“I can tell what color the balls are by following the game. People these days don’t follow what’s on the screen. They’ve got the attention span of a newt. They get lost off. Though I’m not surprised, because they’re too busy looking at their phones and what nots. Having conversations with each other without even talking to one another. Ha, when they dance, they’re two feet apart, instead of being close to each other. That’s not dancing. There’s no form. Nothing. Just jerking around. To dance would take practice. It’d take time. Two things not in the vocabulary.”

I didn’t know what to reply without already knowing the answer, so I just stared harder at the TV attempting to make out what the outlaw was saying to the sheriff.

“It’s a strain. Everything’s a strain. Too much effort. Everybody has to have it blaring in order to hear it. If you pay attention and you’re tuned into what’s going on, you hear just fine. It’s all that loud noise you keep pouring down your ears.”

“You had your music for your time,” I blurted.

“Our music for our time!” spat Uncle Charlie. “Our music was timeless. It transcended time. I remember back in the thirties and forties when they used to sing into those large electric razors. It was all the more dignified. They just stood there singing and gesturing rather than flinging themselves around the stage swallowing the microphone.”

“How can you remember? You weren’t even born!”

Uncle Charlie had been a boomer of the fifties.

“When I see them on TV it’s like I was there. I really feel it. Like I‘m watching a memory,” said Uncle Charlie stagnantly, before stirring. “Anyway, I can imagine, can’t I? Don’t people have any imagination nowadays.”

“I’d say we’re more imaginative than ever before. Just look at the movies we got now.”

“They don’t make movies like they used to. Back in the thirties and forties. That was the golden age.”

“The seventies were a golden age for film too.”

“Yeah, it’s when movie makers were really serving their films with a dose of reality.”

“Maybe there’s too much reality. When you went to the movies you went to escape reality. Movies were magical. Now they like to get bogged down in the reality of things. Nothing’s left to the imagination anymore. Everything’s too explicit.”

“Don’t you think the acting’s better because it’s more real? It’s not as theatrical as it was back in the old days.”

“That’s proper acting. They were real stars back then. They were untouchable. And they were much more beautiful than what they are now.”

The color flushed into my cheeks, then drained like a cistern, until I was left with the same concrete complexion as Uncle Charlie, staring at the Cassandre posters on the wall.

“Nothing these days compares to the old. You just have to look at modern art! It’s not art. It’s just a blur. There isn’t any art to it. They can’t draw so they just throw paint at it.”

“They’re meant to get you thinking as opposed to admiring it. You like Jazz, right? Jazz was a break from the restraints of classical formality. It is a form of freedom of expression.”

“Freedom of expression! Free form Jazz. Jazz fusion’s just confusion. It’s just noise. There’s no harmony. Not like the Big Band and the swing era. They practiced. They didn’t just play. That’s the trouble these days, everyone has to have without the effort.”

I sat staring at Uncle Charlie who sat staring at the TV. As the picture turned to static, I became mesmerized by the dancing dots, and began to see images moving.

Entertained to death, that’s how we’re all going to live out our days, all through the days and colors of others. ~ Tyler Malone

Anthony tends to fidget his thoughts in the hope of laying them to rest. He has managed to lay them in a number of literary magazines, including: Enhance, Word Gumbo, Drunk Monkeys, Crack the Spine, Shadow Fiction, Message in a Bottle, Torrid Literature Journal and Blinking Cursor amongst others.