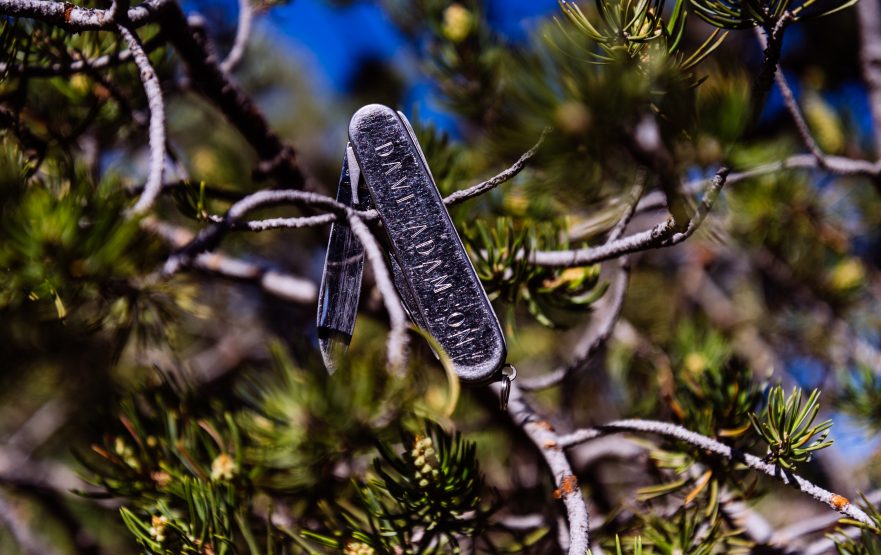 A scream runs through the street. A young couple sees what they’ll talk about until they’re old: a time, together, when they saw a body on a sidewalk. The couple hold one another and their breaths until police and emergency services arrive. No one offers a “Poor bastard” as those living gather to see where life goes.

There’s something about knowing in an instant what’s without life. A gutted building or abandoned car are the same as a dead man’s body. Police tell the couple to leave. As they do, they wonder if it’s all pointless. They know what brought them there on the street, but what purpose and different streets did the dead know?

There’s no ID or phone, only a silver pocketknife etched with the name Dave Adamson, ached by nothing, free of any pocket’s responsibility. The living hold what the dead can’t; a silver knife from an antique store’s wicker basket reading $1.00 JUNK.

“You want this knife,” she says, offering the knife as intentionally as love.

“I’ve never carried one before,” he says.

“Then you absolutely need this. Look, it belonged to Dave Adamson of all people.

He runs his own thumbs over the name always the same no matter who carries it. “I’ll keep it.”

“I’ll keep you,” she says, fully knowing every time a gift is received, a person can be someone they love enough to keep more than memories and to lose more than one dollar junk.

He smiles at his future. “I’ll carry Dave Adamson and make up stories about him every time I use it. Those stories will involve our names instead of this strange one. It’ll be your name in my pocket for as long as I live.”

A kiss runs through the street. A young couple sees what they’ll talk about until they’re old.

With this talisman one life lives at the end of another. From a scream to a kiss, we can all say this: Long live Dave Adamson! Long live Us! ~ mh clay