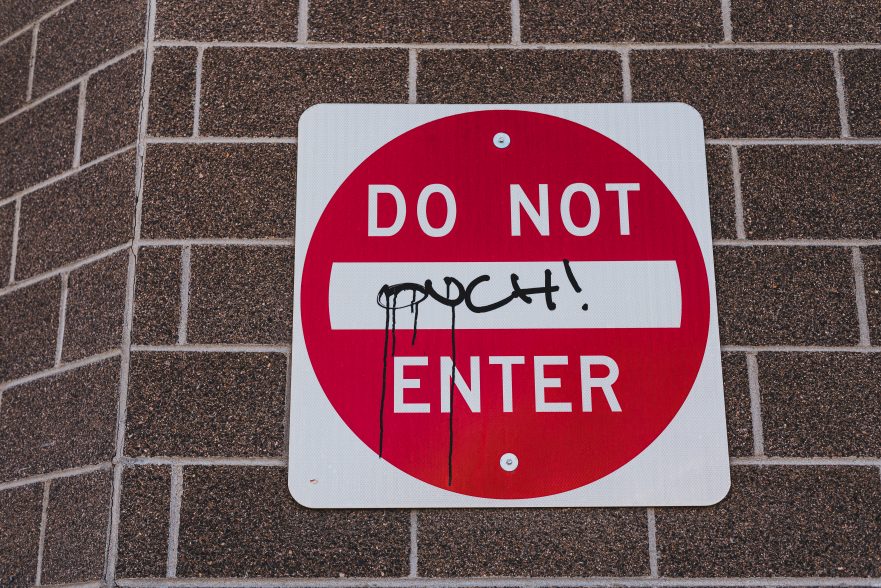 photo "Words to Listen To" by Tyler Malone

Vacationing in a small hut on the beach, or rather attending an unimportant convention, we stepped outside to a glorious morning: blazing sun, sparkling sand, gulls glinting and squawking as they swooped above, ocean waves dancing upon the beach. We began the long walk to the convention halls, my wife rapidly, impatiently ahead, gaining ground as usual. She swooped into a glade of trees and small boulders. I ran to catch up, unsure which direction she had gone. I hurried forward to the convention halls that towered sternly overhead like soldiers.

Bumping into a scrawny young guy who seemed to be attempting to grow a beard, I mumbled an apology under my breath. “Hey,” he said, “wanna fight”? He looked as though he weighed 90 pounds and I was not afraid.

“We are outside. And anyway, fighting never solved anything.”

“Come on, come on,” he muttered, lifting his bedraggled limbs.

“You are on a destructive life path,” I said. “But there’s still time to change.”

“No, it’s not. Find something you love, something that helps other living beings. Follow it with passion.”

“They all say that, but it’s not true. It never works.”

“It might not,” I said. “But it might. Look at me. I followed my love of words and now I have a part time job teaching English, where I’m underappreciated and ineffective. I’m underpaid, but I’m not on the street starving.”

“Thank you, sir,” said the bedraggled youth. “No one ever cared enough about me to admit the truth.”

I hurried on, glad that I had fooled him, afraid that he would realize what a hypocrite I am.

Sometimes we need a mirror to see ourselves in others. The only problem is that they’ll see themselves in us, too. ~ Tyler Malone

A bit about Ethan: Ethan Goffman is the author of the poetry collections I Garden Weeds (Cyberwit, 2021), Words for Things Left Unsaid (Kelsay Books, 2020) and the flash fiction collection Dreamscapes (UnCollected Press, 2021), a collection of flash fiction. I Garden Weeds is 2nd place winner of the Taj Mahal Review Poetry Prize. Ethan is co-founder of It Takes a Community, which brings poetry to Montgomery College students and nearby residents, and is founder and producer of the Poetry & Planet podcast on EarthTalk.org. Ethan also writes nonfiction on transportation alternatives for Greater Greater Washington and other publications.