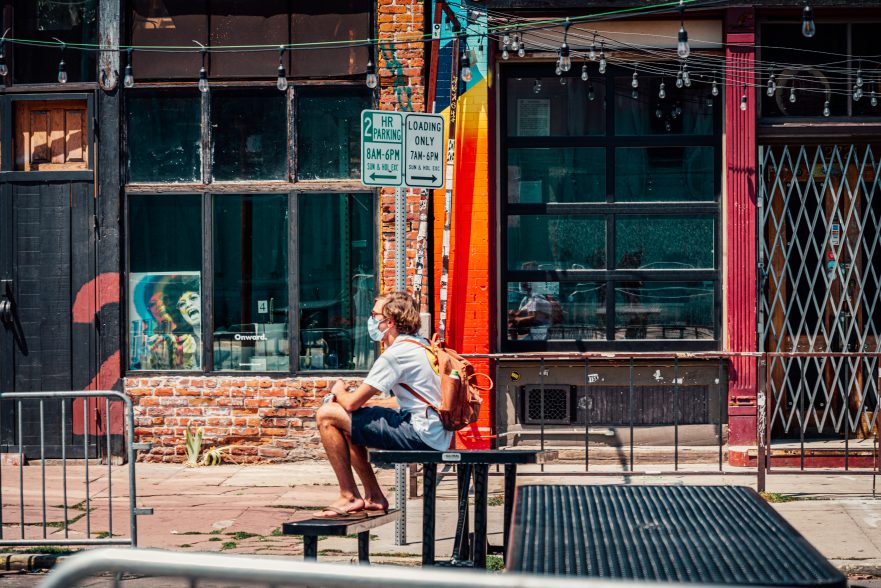 In a theatrical afterlife, the shades take over the performance halls, while post-pandemic audiences move into the limbo of the virtual.

When the theater is dark, critics and reviewers have nothing to report. A Drama Reviewer’s pages remain blank; there is nothing to review when nothing is viewed. Reviewer is unemployed, like the actors, directors, designers and stage hands. He sits idle in an abandoned hall, watching shadows flit across an empty stage.

Life is attenuated in pandemic times. People pull apart, solitary. With social life suspended dream-life comes closer. Ghosts cluster on a thinning border. This empty stage is their place, where distance between physical and mental, past and present, player and playwright shrinks to nothing. Specters rise from past shows.

Sneaking into the hall through a side door, against all pandemic lockdown rules, Theater Reviewer sits among the ghosts of stories past. He waits for an anti-show in stillness and blackness, expecting nothing. But something comes, usurping night. An apparition.

“Speak,” he says, urgently. “I charge thee speak!” Or was that someone else calling out? “If thou hast use of voice speak to me.”

But it would not speak, it stalked away along a parapet. Reviewer felt that it had had a message for him, one he may never now hear. He hears other voices instead, faint and plaintive. Or does he imagine them too?

“Thank god that old bag-of-no-bones has gone,” he hears. “A ponderous presence, no lightness, no humor, yet he considers himself the Chief Ghost of All Theater.”

Reviewer jumps. He turns, thinking this new voice, a husky whisper, had come from behind him. But nothing was there but a blithely passing breeze, barely noticeable, and then a rustling in the rafters.

And then a louder voice: “What did you say, Marley?”

Theater Reviewer jumps. Turning back to the stage, he peers into the gloom. Now who spoke?

“I said that tiresome Spirit has turned up again, didn’t you hear her irritating drawl?”

“No, it’s Ghost of Christmas Future who imagines things, because they haven’t happened yet. I have reality behind me: the past.”

“That’s not my concern, my dear sir, for being posthumously non-corporeal I, like you if you’d but admit it, am not constrained by before and after, nor indeed by the here and there.”

“I hate being in a ghost trio. So promiscuous, don’t you think?”

“Spirits of Christmas past, present and future, yes—an unfortunate notion. People get so silly at Christmas. Especially playwrights.”

“Too much rum in their eggnog, put brandy in their pudding.”

A sudden gruff harrumphing echoes through the hall. Theatre Reviewer starts out of his semi-trance.

“What’s that? Who’s there?” he asks in a nervous whisper.

“Oh, don’t ask that,” says the languorously querulous voice emanating from the rafters. “You’ll bring back that bloody father of Hamlet again who was probably nothing but a hallucination anyway.” Reviewer heard a long exhalation as of cigarette smoke; or at least, seemed to glimpse a smoky ectoplasmic haze up under the roof.

The harrumphing got louder. “We shall not underestimate concepts,” came a stern pronouncement. “Proper sentiments. Duty. Social conventions which hold a decent community together.”

“I hear the north wind sighing through Norwegian pines.”

“Do you? I hear nothing, but I feel a northern cold,” said Ghost of the Past.

Reviewer shivered. He too felt coldness as from a north beyond the planet’s pole, an other worldly north.

“I see a shape upon that chair,” said Marley, pointing.

“The one at that banquet table.”

Reviewer peered into the shadows and he too saw a chair, standing upright, wooden and bare at Stage Left.

“I see nothing,” said Ghost of the Future. “You see only some figment from the past.”

“There!” said Ghost of the Past, pointing at the chair. “Behold! Look! How say you?”

“Oh proper stuff!” whined the voice in the rafters.

It melted into thin air, thought Reviewer confusedly. It was very late now. The theater’s completely dark. Soon Reviewer was half slumbering in his chair. Best seat in the house, he thought, centre right, halfway down. Sitting there he felt something flit by which shed a glimmering light and sang so softly as to be almost inaudible. An oberonian spell gentle as dew fell over him and Reviewer entered a dream world. Time passed but seemed suspended.

Much later an eerie light began to emanate from somewhere. Reviewer stirred, then blinked. Light was coming from windows high up near the ceiling on the east side of the hall. Daylight, he realized. Dawn! He had been sitting here all night, half asleep, half dreaming.

It’s an evil awakening, he thought, when blank morning steals the night and silences the spirits. He stared at the deserted boards. The empty chair, banquet table, parapet, humming fairy, hazy smoke were gone. Everything I love is banished, he mourned. He left the theater, slipping out the side door which he had broken into hours before. I too am exiled, he thought. I have no role, no work, nothing but my fancies to report, nothing but ghosts to watch, and nothing to do but rejoin an empty world. He drifted like a shade down the chilly streets. He went home to bed, to sleep. To dream.

We are walking through a wasteland, taking only what’s with us into tomorrow, where nothing is certain. ~ Tyler Malone