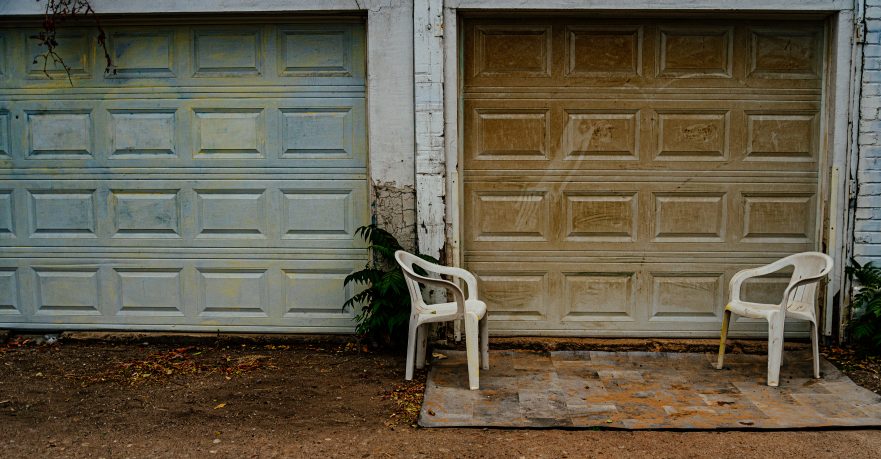 photo "Spot for One, Space for Two" by Tyler Malone

Maria, a forty-year-old divorcée, hoped Frank hadn’t changed his mind. She peered out her living room window. Pedestrians passed, cars eased to the curb, but no sign of Frank. She scooped a handful of jellybeans from the candy dish and popped them into her mouth. She picked at her teeth with a glossy red fingernail.

Finally, Frank pulled up front and beeped the horn.

He’s here. Maria raced into the bathroom. She squinted into the mirror for a last-minute check. I can’t believe I’m getting married.

Another honk, one long continuous blast.

“Okay, okay, I’m coming,” Maria dashed back into the living room. She snatched her purse, slung the strap over a shoulder, and grabbed her overnight bag as she ran out of the house.

As soon as Frank saw her jetting across the yard, he casually climbed out of the car.

“It’s a little warm if you ask me,” Frank replied with a hint of annoyance in his voice. “Give me your bag. I’ll put it in the trunk.”

Maria knitted her brows. What’s his problem? Maybe he’s just worried about his mother. She opened the passenger door and tossed her purse onto the back seat and watched Frank struggle to suck in his gut and lock in fifty pounds of fat under the strap.

“Are you sure you want to do this?” he asked.

“What kind of question is that?”

“Just asking.” Frank started the car and eased away from the curb onto the road. He reached over and turned up the volume on the radio.

However, that didn’t keep Maria from trying to stop Frank from overthinking what they were doing. Because she knew he loved to eat, she talked about food. Polenta cooked with garlic and Parmesan cheese. Spaghetti with meatballs swimming in a red sauce, and lasagna stuffed with ricotta.

When they reached the Biggest Little City in the World, Frank glared at the blazing red sign, “Welcome to Reno,” and joined the procession. Casinos lined both sides of Virginia Street, their bright lights daubing everything and every one of the sidewalks with color. Maria rolled down the window, “I love this place. I’ll… I’ll watch for a wedding chapel.”

“Look!” she cried out a few minutes later, “There’s one. Antique Angel.” With a fast-beating heart, she pointed. “And there’s plenty of parking.”

“What kind of name is that?”

“I guess you’re right. Antique Angel. Ridiculous.” Maria sighed and moved to the edge of the seat to get a closer look. The car continued to move at a crawl.

“Frank. I was thinking. Instead of a live-in-caregiver, maybe you should put your mother in a nursing home.”

“She’s not going into a home. I thought I made that clear. She’s eighty-five.”

“You did. But… but… oh, just forget it.” Maria gave a dismissive wave.

When Frank reached the end of the main drag, he made a U-turn.

“What are you doing?”

With a reddening face, Maria sat in silence. Like a pressure cooker about to explode, she clenched her fists and held her breath. And then suddenly she turned on the leather seat, got on her knees, and climbed over the top.

She struggled for several minutes trying to untangle the nest in her head. She’d gambled. She’d shuffled the deck. She’d pulled out a joker. “I hate you. How could you?”

Frank drove toward home without saying a word. She stayed curled up in the back.

Hours later Frank pulled to the curb at Maria’s house.

She sat up, “Get my overnight case.”

“Will I see you tomorrow?”

Her bag weighing much more than it had, Maria dropped it the instant the door closed. Tired and disgusted, she flopped on her bed and buried her head in the pillows. Face it. He told you he lived with his mother when you met him. Didn’t take long to realize he’s a fifty-year-old confirmed bachelor, did it? Either accept him the way he is or —Maria closed her eyes— move on.

She remembered the good times, the way he laughed when he twirled her too fast on the dance floor, the wind in her hair when they were out cruising the waterways in his boat, the restaurants, ordering steak and lobster. But she wanted more. She wanted to get married.

I can’t change him. Let him go.

We can’t change, so it’s not up to someone else to hope we can. It’s up to us to up and go. ~ Tyler Malone