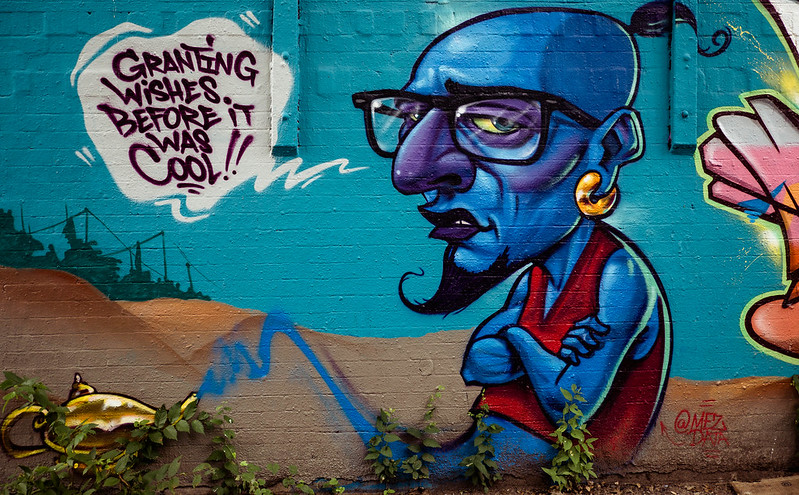 Dominica had a beehive like Amy Winehouse, like Marge Simpson. It was a strange beast, natural but with a fake sheen. If someone needed a pen or a lighter, even a cup of tea, she just reached inside and pulled out whatever was needed. Chris, her ten-year-old nephew, was fascinated by her tricks and at a family gathering hosted by his parents, pita bread, hummus, and a selection of deli meats were running low, so she dipped inside her hedge and plucked out a bowl of BBQ chicken wings and some sausage rolls. No one seemed surprised. In fact, most seemed strangely vexed by her actions and wanted to brush her talent under the table. But was she Jesus or David Blaine?

It was a bank holiday Monday and everyone had soaked up plenty of sun in the garden, consumed lots of red wine—peals of laughter resounding through the neighbourhood. Around 9pm, Chris’s extended family all collapsed in the spare bedrooms—woozy and red-faced. Dominica was placed in the small office beside Chris’s room and she’d been given a foldout bed that could just about squeeze into the confined space.

Chris heard her snore just minutes after her head hit the pillow. He entered her room and watched Dominica’s chest heave up and down as she slept serenely in the foetal position. Chris planted his hand into the beehive and felt around. He leaned in, reaching further and further until his whole body had slipped into the hair and all became dark. He opened his eyes wide and focused. He picked out droplets of light. In fact, he realized they were giant orbs in the distance. The orbs floated back and forth through the infinite darkness and as they moved, Chris could see objects trapped inside. Chris saw a guitar, a cat, a glacier, a rocket, a skull, a truck, earrings, and on and on. Chris himself was caught inside one of these strange bubbles. Then a hand stretched into the void, perforated Chris’s sphere and dragged him back into the real world making his ears pop.

Chris found himself sitting on the bed beside Dominica who was reshaping her hairdo, a photo album resting on her lap.

“It’s time you knew,” she said, opening the album. “These are pictures of your close and distant relatives along your mother’s line. What do you notice about them?”

“They… They all have short hair, even the women.”

“Yes. With one exception,” Dominica said, pointing at a middle-aged man with a giant mane. “That’s your great grandfather, Harold. He had my powers. The truth is the whole family does, but they’re afraid.”

“Afraid of what? It’s beautiful.”

“Yes, but Harold drained himself trying to help people. He was taken advantage of until one night someone killed him and cut off his hair. Since then everyone has tried to bury the truth.”

“I wanted to continue the lineage because it’s part of who I am. I won’t hide. Your hair is getting a little shaggy. You will have to choose soon.”

As all the family said their goodbyes, Chris watched as Dominica squished her thatch into her car, angling her head out of the window and he was haunted by visions of the magical orbs. Surely it was all a dream.

Seated on the barber’s chair a few weeks later, his parents opposite, eyeing him through the many mirrors’ reflections, Chris flicked through a magazine filled with hairstyles.

“Hurry up now,” said his mum, having just got a military style buzz cut, “we haven’t got all day.”

Chris dropped the magazine and said, “I don’t want this. I know the truth, Dominica told me.”

“Whatever she said, she lied,” said Chris’s dad.

“I’ve seen for myself,” said Chris, and aimed his hand into his bushy hair.

“Restrain him and shave his head,” Chris’s dad ordered the barber.

Chris ripped the apron off his chest and dashed out of the salon, into the street. A car shot out of nowhere and hurtled towards Chris. Just in time he bowed his head into the vehicle’s bonnet and the car was sucked into Chris’s orbit, vanishing entirely, leaving the boy completely unscathed.

Chris’s parents rushed to his side, lifted him on to the pavement and checked if he had come to any harm.  It took some time for them to come to terms with the incident, but eventually they told him they were so relieved his hair had saved him they would allow him to grow it as long as he wanted. And he did. His hair sprouted into a giant mop, like none other.

Chris met up with Dominica again at a Christmas party with all the family, a few months later. Many of Chris’s clan were growing their hair freely now and they manifested whatever they liked in a madcap jamboree—rainbows in the living room, Cartier jewellery in every present under the tree, elephants stomping in the garden amidst the snow, the original lineup of the Beatles playing live on the raised patio near the French windows.

Then Chris had an idea that had never occurred to him before, or anyone else for that matter. He dug inside his bush once more and pulled out an old man, with a pronounced Adam’s apple, clutching the Old Testament. He blinked furiously, adjusting to the reflection of the garden lights in the snow.

Chris called for the family’s attention, saying, “Everyone, this is Harold,”

Everyone stood dumbstruck. “Don’t just stand there, get him a drink!” said Dominica. And with that, everyone swarmed around Harold eager to get to know the man, peppering him with questions and hugs. It wasn’t long before the garden was teeming with long lost relatives plucked from the family’s hairdos. It was a party for the generations, never to be forgotten.

What’s in your head? Reach in, hold on, and bring it to the light. ~ Tyler Malone