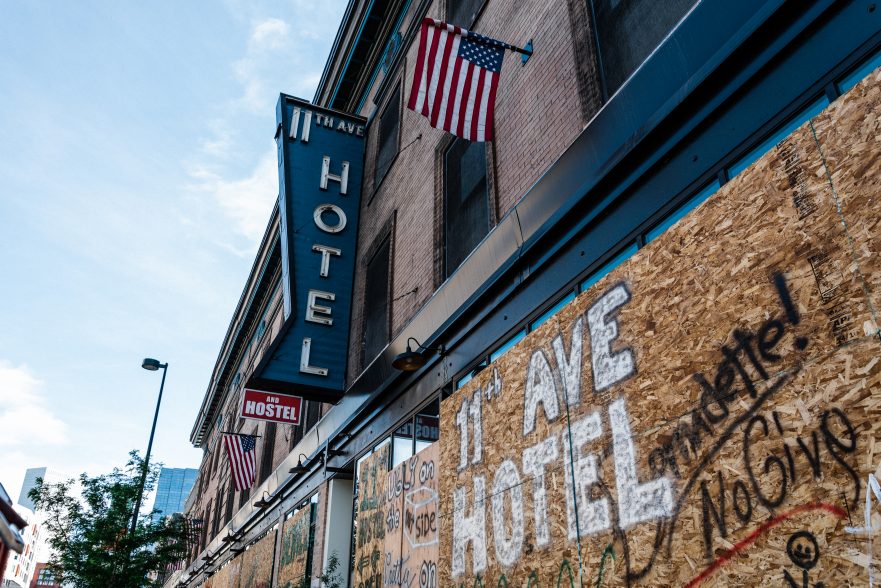 photo "Board of the End Times" by Tyler Malone

Now they’d bloody well fucked it. Humanity, having finally realized how much it hated itself, had wiped out its existence from the universe in a nuclear firestorm. Even the politicians were dead, the ones who had pushed the buttons to set the whole thing in motion. The big nuclear powers, seeing the course global politics was taking, had all independently developed bunker-busting warheads capable of penetrating the deepest recesses of Earth. And penetrate they did. The only individuals left alive were the crazies and the lunatics who had built private fallout shelters. This is the story of two such individuals.

Michael had been ten when the bombs went off. His father, Jonathan, had spirited him away from his mother before everything exploded, and that was that. Now, after 18 years of confinement, Michael couldn’t even remember what life was like outside their bunker. Not one bit. For 18 years his reality had comprised of one room, self-contained and self-sufficient. A bunk bed in one corner, a communal toilet in the other. That toilet—a metallic bucket type—was hooked up to a recycling system that transformed Michael and Jonathan’s piss and shit into something almost, but not quite, resembling food.

On Tuesday nights, Michael and Jonathan played monopoly. On all the other nights they minded their own business, and tried to get on with things, but on Tuesday’s at least some semblance of society was required. Their games usually went something like this:

Needless to say, these games didn’t go for that long. And Michael would return to the only book that had found its way into the bunker—the official biography of Elon Musk, by Ashlee Vance. Michael had read the thing cover to cover within the first few weeks, so now he was re-reading it, one word at a time. The actual text was already burned into his mind, but it was the ritual of the word-reading that was important. One word per day. Hopped for example or insistence became sermons of worthy of Nietzschean contemplation.

Jonathan’s daily activities consisted of re-watching any number of the over 7000 pre-war news broadcasts that he had, for reasons known only to himself, recorded. He had recorded the broadcasts in tape form, and the several thousand miles of film were stored in neat, polished containers in a large metallic bookcase—along with the monopoly board and Michael’s book. They were all done by the same bloated red-faced anchor and they all ran along similar themes. Here is a selection:

“In these trying times,” the anchor would say. “Remember that the commies and the chinks won’t hesitate to rape your babies.”

“In these trying times, remember, it’s better to kill than be killed.”

“In these trying and confusing and bizarre times remember to leave the toilet seat up.”

“In these trying times remember that God is dead.”

“In these trying times remember… I have a gun! Oh, that has all you producer cunts worried. You want to see it?”

That was the last tape in Jonathan’s collection.

“What’s all this about the working class then, eh?”

“Jesus, man!” exclaimed Jonathan. “How do you think you’re going to get a job when all this blows over if you don’t know what the working class is? If you think you’ll emerge from this bunker as the Elon Musk of the post-apocalypse if you don’t know what the working classes are, you’ve got another thing coming kiddo.” This was the most they’d spoken in 5 months. “Anyway, Park Lane. Hotel. $3000.”

“Fuck you! You know what? I’m going to get a loan from the bank and buy your ass out.”

“Oh, ok sure,” said Jonathan. “Seeing that I’m the bank, let me think about that. Hm… fucking denied, you scum. The only bankrupts we give money to are presidents, not sycophantic pro-billionaire reactionaries.”

“Eat shit, you fuck!” Jonathan slapped Michael across the face.

Michael fell to the floor. “I’m not the one who’s going to eat shit!”

Michael went over to the toilet and ripped it out of its housing. There was still a little shit in it that hadn’t been recycled. Michael took a running jump and slammed the metal lid of the toilet into Jonathan’s mouth. Teeth broke into pieces and mingled on the floor with the blood and the excrement. Michael kneeled over Jonathan and smashed the toilet into his father’s head again and again and again until there was nothing left but red mush.

Michael, covered in brain and faeces, staggered to his feet. The rolls of broadcasting footage caught his eyes. He walked towards them tenderly, reverentially, religiously even. Slowly he removed the rolls of tape from their housing and pulled them apart with his teeth.

When Michael had finished with tapes, he went over to the bunker’s exit hatch and opened it. There was a ladder. He climbed and opened the top hatch. The world unfolded in front of Michael; a gray irradiated place covered by impenetrable black clouds. Michael made it five steps from the bunker before collapsing in a spasm of radiation. He died of exposure a few hours after that. Alone.

The world we want is the world we create by our own hands, our own hearts, our own pasts we bring kicking and screaming into our futures. ~ Tyler Malone

A bit about Harman: "My short fiction has previously been published in CafeLit, Friday Flash Fiction & Scarlet Leaf Review."