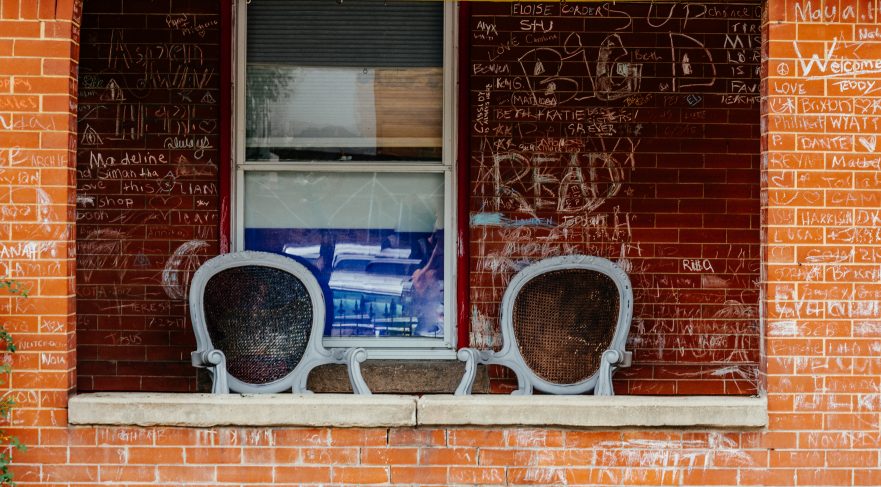 photo "Seat in Hell for Two" by Tyler Malone

Everything began when the larger dog attacked the beagle and drew a six-inch bloody gash across its side.

Nick rushed to his dog, picked it up gently and carried it to the porch where the old man sat reading the newspaper. “Can you give me a ride to the vet?” he asked. Before the old man could answer, he added, “But first I got to take care of some business. Their dog attacked mine－” He pointed to the man and woman sitting on the porch on the other side of the old man’s home. “It was their dog and I’m going to hurt it.”

The old man stood, wiped his left hand through his thick mane of gray, put his hand on Nick’s shoulder and said, “No need. Not right now anyway. Go in and get an old towel. My wife will help you. We’ll bundle him up and then get him to the vet.”

When Nick entered the house, the old man folded the newspaper and walked over to Tom and Sally, the young couple who were now restraining their dog by its collar. “I’m going to take Nick to the vet,” he said. “We both know he doesn’t have much money so I’m going to pay for this. I’d like to know if you would help out. It was your dog after all.” He spoke with his eyes attentively on both of them in a soft voice, but there was a surge of electricity that came out with his words. “I know you don’t have much either, so just tell me yes or no and I’ll be on my way.”

Tom immediately answered, “Of course, we will. We’ll pay you a couple hundred next Saturday. That okay?”

“You sure about that?”

The old man paused, began to walk away, turned back towards them and said, “I take a promise seriously. If you break it, I want you to know there will be consequences.”

At the vet, they took a photo of the injury before and after. When they arrived back home, Nick was calmer. He took his dog into his apartment, thanked the old man for helping and did not come out again.

When Saturday arrived, the old man walked up onto the porch of his neighbors and asked, “Do you have the money?”

“Get the hell off our porch, old man. Who do you think you are?”

The old man waited patiently for him to finish. He turned to Sally. She shrugged.

“Okay then. I told you there will be consequences.”

As he walked away, Tom rose from his chair, cursed the old man with a new tirade of words and then laughed: “Consequences? Consequences? Get the hell out of here.” He cursed some more.

The old man and his wife took the photos to the copy shop, created a poster warning the neighbors on their block that a dangerous dog lived at 327 Cherry, added a few words about what happened, paid for the 18 X 18 posters and passed them out as soon as they arrived home.

It didn’t take long for Tom to hear about them. He jumped off his porch with a baseball bat, Sally a dozen yards behind him, and two other men walked with him egging him on. When they reached the old man, Sally stayed in the background, but the three men crowded together and faced him. He looked at all three of them, smiled, and wondered if they were in their early twenties or maybe even already thirty. He sighed. If they were indeed thirty, he thought, they’d have better manners. Okay, so they must be in their early twenties.

“Told you there’d be consequences,” the old man said.

“And I’ve got consequences too,” answered Tom. His two buddies laughed.

One of Tom’s buddies moved a few feet away.

“I just want you to know, I’m so not afraid of you, I’m not even going to take off my glasses.”

The words reached out as if he had thrown a punch. Both of Tom’s buddies lurched back—one five feet into the street and the other a half dozen feet onto a front lawn.

The old man stepped one step closer. He was almost in Tom’s face. Tom stepped back. Then he took another step away and let the baseball bat fall limply to his side. “There will be another time, old man,” then he turned and his buddies and Sally followed.

Three days later a moving truck pulled up and Tom and Sally were gone.

It’s a dog eat dog world. Some dogs, though, can’t be put down. ~ Tyler Malone