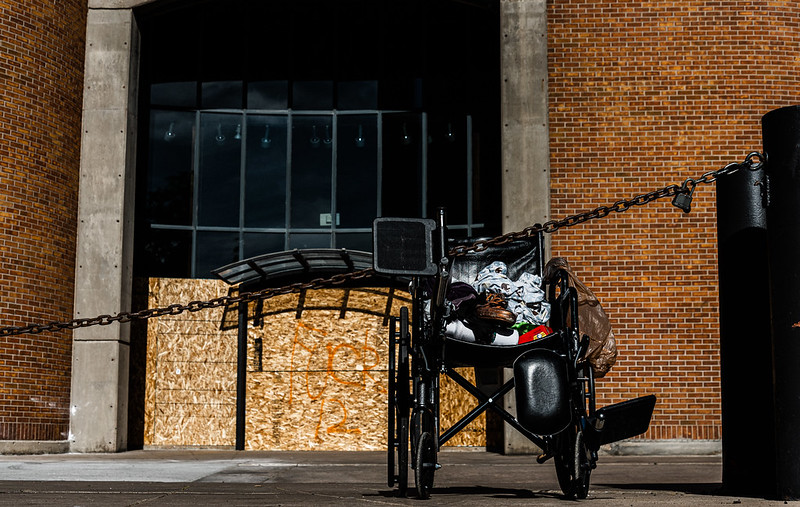 The orange book was an abomination. The people working in the shop left it to work its own way ‘round. Shaliqua saw it on one of the tables Thursday morning. When all surfaces were wiped but that table, she abandoned the task in favor of shining spoons. From behind the counter, with her right eye closed, she held each spoon up between her left eye and the orange, landscape soft-cover.

Friday, Adam, a frequent patron with thinning dreadlocks, turned the orange cover, which gave more at the white streak crack from top through mid. The top corner fell more quickly and sputtered out from under the weight of the bottom half. Adam walked from the window bar to the counter where the aroma of a WestGress coffee was more satisfying.

Sean, a busboy, was leaning against his arm, stretched over Francine’s shoulder. This was Francine’s first time in the shop. She had been browsing the poetry shelves when Sean expressed his attraction.

“You have only seen me from behind.”

“Do you see that orange one?” The musk of tobacco billowed after Sean’s hand, as he pointed to the book on the shop’s book cart.

Francine’s eyes followed the musk. “Yes, the orange cover with a white-streak crack and black splotches. Are those crappy quality photo-copy markings?”

“Now look at that sunset.” His hand raised to the large pane, or rather the red orange strip stretching across SouthGress’s Saturday sky beyond.

“Yes.” She turned to look at the thick red of his eyes.

His eyes remained fixed out where his hand had been pointing. “I only seen that orange from one side.” His hand came to his lips.

He looked down at her holding a copy of Larkin’s High Windows to her chest. “I know I prefer that one to the other.”

“Yes.” She became aware of the dimpled texture of the book she was holding. She thought how there were any number of reasons to do something public at that moment; whether that be kiss him, fuck him, or kick him. She watched his eyes for a moment, tried to find a clue in the fingers at his lips. The corners of his mouth refused to yield under her gaze. “Yes.”

And he looked back out the window, as she slid toward the counter.

The spine was bound with thick black binding tape, but most would remark at its similarity to duct tape. Raised, thin strips hinted at the staples beneath. At its very top and very bottom, the corners were blunted, mingling the sharp blackness with the white of the pages. This was Sunday. The tape binding and one inch of orange, black-mottled, white streaked cover extended beyond the edge of the miscellaneous shelf.

Adam sat in the sunset orange lounge chair in the corner by the bookshelves. This was no longer Sunday. The fabric was wearing thin at the ends of the chair’s arms; white matting was showing through like a biological scaffolding. Adam pushed a patchouli-scented dreadlock behind his shoulder.

He closed the orange book and went to the counter.

At the end of the day, Shaliqua was inventorying coffee. She weighed each glass jar and subtracted the weight of the jar and lid. She made a note to order more WestGress coffee. The beans were darker than the soft pine counter but lighter than the skin of her left hand. She weighed the last jar, made a note, and slid the jar back into place.

A siren went by on the empty street outside. Shaliqua smiled at the scene the sound revealed: empty street, slight chill in the air. It would be a wonderful bike ride home. She walked to the lamp table in the corner. She watched the orange book as she turned off the lamp.

Francine returned on Tuesday. She wanted to look for another book of poetry by Philip Larkin. Francine knew it wasn’t Friday, but hadn’t given herself over to excess worry about whether the guy from before would be there. Francine was squatting against the wall behind the bookshelves which met the half wall which formed the corner where the chair, the table, and the lamp sat. She was thumbing through the first of three Larkin books.

Adam was sitting there, a cup of coffee beside him. There was nothing, he was telling himself. He was creating everything. It had made sense when he read it. He knew that it was correct in a way. But, he’d been introduced to Emerson. And Emerson had assured him that whatever felt right, he needed to trust that—to trust himself. And well, it didn’t feel true that he was creating everything.

Shaliqua pulled brownies out of a toaster oven. The cocoa seemed faintly woody in her nostrils. The butterscotch chips were burnt orange against the cracked black of the brownies. She slid the rack into the display, to let them cool. Shaliqua had a talent for being present. Her thick smile was genuine in its contentment, baking brownies. She felt the same in her Psychology classes.

Sean was not in the shop. He had agreed to work four eight hour days and two four hour days on the condition that he have Tuesdays off.

The orange book was tucked under the chair in the corner. It was opened, face down. The pages were turned two pages past center. It was not flat against the floor. The front pages had puckered and rolled back toward the gutter. But its position had been settled for some time.

We find ourselves among what’s been lost. And in that, we find out how little we know. ~ Tyler Malone