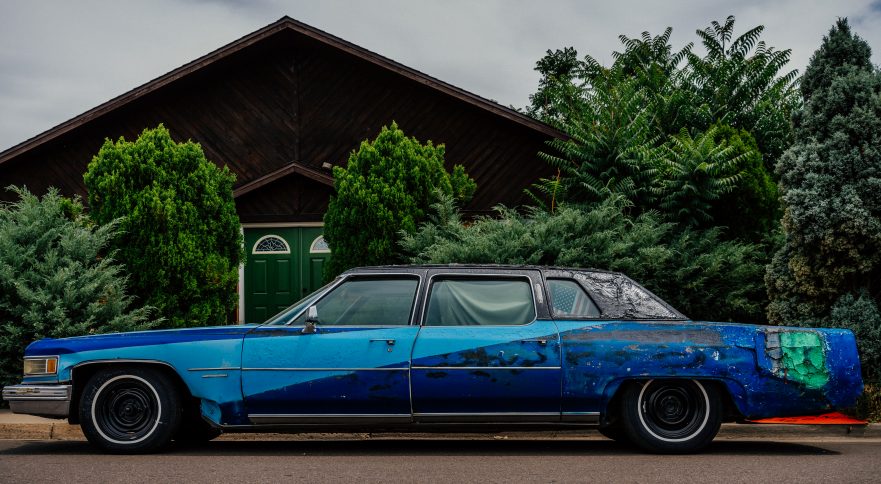 photo "the Beast!" by Tyler Malone

If inanimate objects could talk, imagine the stories that would be told. When I was going to nursing school to become an RN and avoid starving to death, I bought a 1970 Chrysler. It was 28 years old when I bought it. It was a huge car. It burned a lot of gas and the heater didn’t always work as good as it should, but it ran good and there were no car payments.

My friends and acquaintances often made fun of it. Sometimes I did too. It was a big dinosaur of a car. I called it The Chryslersaurus. I drove it 20 miles to school, from there to work, and then home again almost every day for two years, until I got out of nursing school.

When I graduated from nursing school, I was hired as an RN at the hospital I worked at while going to school. By that time, the Chryslersaurus needed new tires and driving 20 miles to work each day with rising gas prices was not very practical. I bought a brand new Ford Escort. I also bought a plastic yellow for sale sign, wrote $500 on it, placed it on the windshield, and parked the Cryslersaurus out in front of our house.

At this time, my wife was going through a midlife crisis, which was driving her into the arms of other men and we were nearing the end of a 17 year marriage. She sometimes spent time at a bar on the edge of town. I would sometimes stop at a bar uptown when I got home from work and have a few beers before I went home for the evening.

During the course of these pit stops, I would enjoy conversations with a young woman who tended bar there. She was attractive and down to earth and I enjoyed her company. I would also sometimes visit with a lawyer who frequented this bar. One day when I was having a beer there, two guys I had never seen before in our small town came into the bar. They were unshaven and looked dirty. As soon as they had ordered their drinks and were watching the barmaid walk away to get them, they began describing in great detail what they would like to do to her.

They also took notice of the lawyer, who was dressed in a suit, teasing him about how nice he looked. These two guys and the lawyer and me were the only customers. When the lawyer finished his drink, he left. Usually, I would leave after a few beers, but I stayed until those two characters left, which finally happened after she threatened to call the police. She thanked me for staying until they left.

It turned out that these two guys were staying with a guy who lived right down the street from our house. I found out later that one of the two guys at the bar was the neighbor’s Dad. I learned that later from talking to the neighbor, a guy I knew casually from brief conversations we had when I was walking our dog. They only stayed with him three days, but in that amount of time, they had piled up a huge mound of beer cans in the neighbor’s front yard.

One evening, my wife and I were having a heated conversation about some of my wife’s “friends,” when she attacked me and we wound up wrestling on the floor. Our match was interrupted by a man’s voice saying, “I’m sorry about your domestic problems but I’d like to buy that car out front.”  He was standing at the screen door peering in at us. He wound up buying the Cryslersaurus for $500, tuning it up, and putting new tires on it. Him and his friend then drove it to Texas where it was stolen from out in front of a motel room they rented in El Paso on their first night there.

So it was that the Chryslersaurus cruised off into history. Perhaps it became the car of some Texas outlaw, maybe parts from it were used on other cars, or it became the ride of some Mexican bandito and began cruising south of the border roadways.

Extinction is exhausting. Crawl from an apocalypse and live in pieces if you have to, but live. ~ Tyler Malone