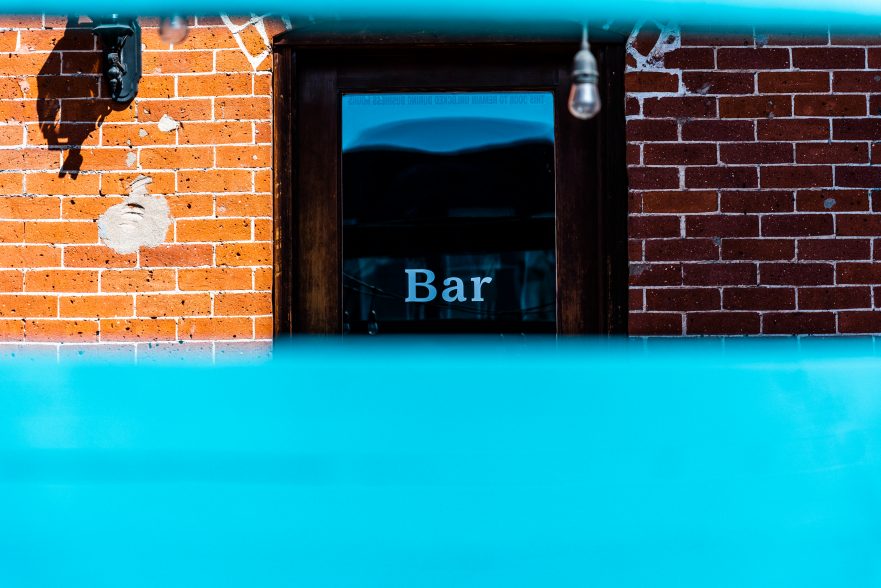 Midday bartending is witnessing drinkers begin, then see them end before your night even starts. Ending shift drinks are something to hold to, same as a nurse in aged green scrubs holds to her deep yellow beer. She daydreams, day drinks, and has for two hours. She’s looked towards me but far into her own past. Or into what happens next.

“Mind if I grab this seat?” I ask, taking out my phone, feeling cash lumps in my pocket, hoping to discover a night’s reasons to lose generous gifts.

“I’m sure I made your shift awkward. I can’t hide my damn eyes.”

Taking my first free sip, I ask what they’d been focused on.

“Nothing here.” She looks into her fifth beer and asks, “What are you drinking?”

“I poured all your beers so I thought I’d have one as well.”

Glass to lips, lips to God, her entire beer disappears in a gulp. “Come to my place.” With that, all the plains of my phone can’t offer any horizon as mysterious as this. “It’s only two miles away.”

“Are you going to make it?”

My throat’s patient but I feel her urgency. I retroactively race her chug as she traces shapes onto the bar with her empty glass. “Follow and find out.”

The new bartender, a friend with a skull tattoo accustomed to locked secrets, lifts his eyebrows at our conversation and only says, “See you tomorrow. Survive the night.”

She drives her Volkswagen same as Caligula rode his favorite horse through a darkening world, leaving flakes of gold behind on streets. Her rarely used red brake lights are a demon retreating into a stagnant purgatory of speed bumps down wide roads and trash in front of locked houses with latched lids. Everyone doesn’t trust everyone because they keep their garbage out but locked, secrets kept as close as handguns under pillows.

Looking down her street, lamps bending from both sides cast weak chromatic light on prowling life on asphalt, I discover sudden hope in wishing the world isn’t lost in a valley of time, an endless circle of latched doors and creatures starved in darkness. “Do you have a problem with raccoons or something?”

“Problems with people coming into the neighborhood looking for tasty trash. Probably after old tampons or watermelon skins.” The automated door lifts, and the entire garage is walled with grayed fake rock pocked by colorful protrusions, grips, and ledges. “By the way, I’m married.”

Standing in their driveway watching the door lift, showing the climbing gym garage, she continues, “We met climbing, so we wanted to build a gym. Gym—that’s also the name of the guy my husband is fucking,” and kicks harnesses, straps, climbing shoes, boxes holding nothing but mountain dust aside. “Let’s burn one.”

Opening the kitchen door, a void of purple light spreads through a wall of windows. There are no stars above the tall concrete fence inspirational to hurt hearts as I walk into her rocky world.

“All I have are his fucking ciders to drink.”

“Then we need to get rid of them,” I say as she opens, drinks, and inhales an entire cider in the span of my sentence. I crack mine in the kitchen built for love between two people who aren’t us.

I know my lips won’t be on anything other than secrets as she leaves her kitchen’s still atmosphere while the slimmest curve of what’s left of the sun fills the air. No music, only the opening of neighboring doors to take out trash.

“It’s been three weeks—twenty-one days. I’ve quit being lonely in mornings. The nights are monstrous while I do nothing but wait for stars. And tonight, I brought someone home but now I don’t know what’s next. I wanted to grow old with someone but now I get to find out how I really want to live. How I have to live. Twenty-one days and I’m done counting.”

An empty concrete pool is dug into the yard. It’s surrounded by austere white patio furniture and a BBQ pit too sales floor fresh to have ever been used.

“Twenty-one days doesn’t seem too long. How long were you together?” I ask as she lights her cigarette. I wish cider had been in my mouth instead of the question. In absent sunlight, the night becomes war paint as the first of the furniture is kicked into the pool’s empty deep end. All hoped for bliss becomes trash as I step back but she goes forward, kicking every piece into the pit of secrets meant for sun and true love until she’s at the immaculate matted black BBQ pit. It falls like a dark spy plane onto a white wedding. Smoking, she pours the BBQ pit’s lighter fluid into the pool and drops her cigarette onto the piled effects of her past heart.

Concrete stains to charred angled slopes begging for water as she says, “Orange was my wedding color.” Words dissolve into her night’s abyss swallowing smoke inhaled by the face of the moon matching hues of bent street lamps depriving flowers of their glow, unconcerned of who’s in homes as wind pushes flames careless about knowing us, hearing our suffering, or who lives off our trash.

Sometimes we need to burn to embers before our light can shine again. ~ Mike Fiorito