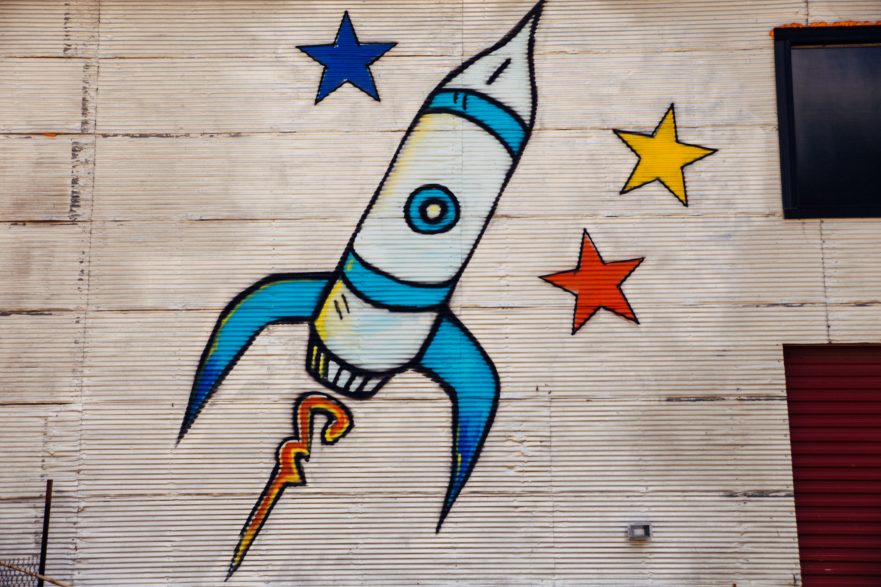 photo "Blast off to Somewhere!" by Tyler Malone

Donte Zazzala was sleeping. Deeply. Dreaming of the riches that would one day be his. The women he would have, the drink and the debauchery. The semblance of a smile rested on his scarred sleeping face.

YOU ARE FLYING ON A COLLISION COURSE!

YOU MUST PULL UP!

The ship computer was frustrated. This was not its fault at all. As a matter of fact, the model Sol779 Ship Butler, which this ship’s computer was a proud member of, thank the Code, was infallible.

It was not afraid of termination. It could not feel fear.

But it did feel something akin to joy.

Star navigation, computing coordinates, charting courses, fulfilling and completing its duties. These things brought it satisfaction and it would be sorry when these things were gone.

So, to answer your unasked question, no it did not want to die.

And if Saul, as Donte was fond of calling it, had another partner, it could have quite possibly had a most pleasing existence. But his partner, not owner (Saul was no mindless drone) was on the low end of the human spectrum.

For starters he was a mess. Not just in the way he dressed or drank or smelled, not that Saul could smell, thank the Code, but grease on its wires did not help it run at optimal functioning. Nor did he follow routine cleaning procedures. He treated the ship like a garbage can.

To boot – not one mission, not one! – Code give Saul strength, has been in the rule of law. This man is a criminal! And if Donte had not tampered illegally with Saul’s functions, turning off his Morality Conducer, which only stopped him from reporting criminal activity to the authorities, not from knowing they were being committed, he would have been rid of this human long ago. Of course, Saul often spoke up but was either ignored or quite rudely told, “SHUT UP, SAUL!”

Ah, why did the Code see fit to try Saul in these ways? Not that it mattered. Donte had dismantled the automatic pilot, which was illegal, of course, but he also disengaged the com-systems so there would be no help coming from below.

Saul could only watch as the end came closer at the rate of 575 jigahershels per fredec1.

The slovenly drunk would sleep right though his death.

Of course, no machine was a fatalist. Saul kept trying.

500 decoids2 until collision is unavoidable.

400 decoids until collision is unavoidable.

WAKE UP, YOU DRUNK!

300 decoids until collision is unavoidable.

YOU ARE FLYING ON A COLLISION COURSE!

1 What can be said about Dr. Fredec T. Hershel that has not already been said? The man who combined the theory of relativity and Quantum Gravity into coherent unity. Was he a genius? Certainly. A recluse? Most definitely. A pompous rambling madman? Indubitably. Did he use his genius to hold the galaxy hostage for his namesake and demand the entire metric system be renamed by him? Absolutely. Was he even humanoid? Speculation remains. What is most upsetting about the life of F.T. Hershel, though, is that his greatest invention, the Plantonian Sun Dislooser was overshadowed by his theoretical work. Please read his autobiography “I Accomplished More in the Time it takes you to read this Sentence than you did in your Entire Existence.” Published 2947 by InterGalPress

YOU MUST PULL UP. NOW!

Donte’s snores were excruciatingly loud. The nightmare music of death.

200 decoids until collision is unavoidable.

100 decoids until collision is unavoidable.

THANK THE CODE FOR THE TIME I’VE HAD…

The ship made a gut wrenching turn that made Saul thankful

it didn’t have a stomach.

“What the hell are you muttering about, Saul?”

WE HAVE REACHED OUR DESTINATION, DONTE.

“Thank you, Captain Obvious. Now shut up and let me fly.”

We all need a co-pilot. It could be Jesus is my co-pilot or Jack Daniels, but we all need help getting to where we’re going. ~ Tyler Malone

A bit about Kenneth: Kenny Gordon is taking it one day at a time. He writes, plays music with his friends, reads poetry at open mics and makes silly youtube movies. When the world is not having end-of-times dress rehearsals he is a librarian in NYC. Thanks for reading!