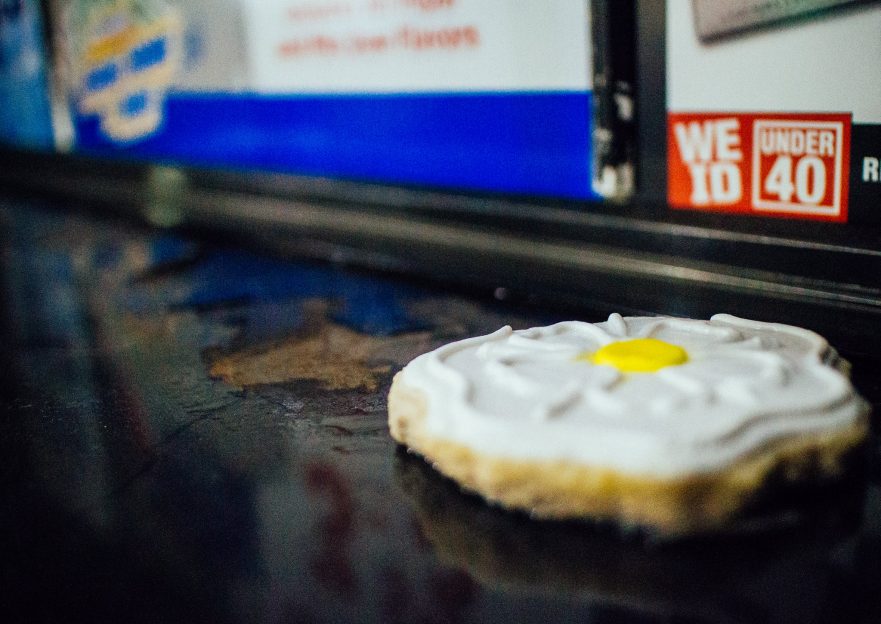 photo "I Did It All for the Cookie" by Tyler Malone

In science class, the teacher was telling us that human beings can’t lay eggs and that only chickens can lay eggs, but I piped up, “Humans can lay eggs, you’re wrong, you stupid teacher!”

The teacher said, “Well, that’s what all the smartest people in the world say is true and you can prove it through science. You can poop shit out of your butt, but you can’t poop eggs. Case closed, dweeb.”

I went to the back of the classroom and pressed the button on the class hot tub. Luckily, there was no one using the hot tub. Students tended to take class from the hot tub later in the day and it was half past eight in the morning. The class laughed at me when I took off my clothes. They tittered and tittered and I trembled with rage because I knew what science didn’t know and I was going against everything I had learned in school to reveal the truth. The truth was too important for me to worry about what a bunch of kids thought of my naked body. I waited for the temperature of the water to reach 120 degrees.

“Well, while we’re waiting for mister baby dick to prove his point,” said the teacher, “let’s explore violin science. Who do you think learns the violin faster, boys or girls?”

The girls said girls. The boys said naw, it’s boys. The teacher said “Well, let’s find out,” and he pulled out two books on how to learn the violin.

“Bob, you take one book, Gretchen you take the other one,” said the teacher. He pulled two violins out from under his desk. “Clock’s running. Go for it!”

Gretchen and Bob started reading their books. At this point, the hot tub was at the optimum temperature and I climbed in. I got into my stance and closed my eyes. I had to gather all my spirit energy in my butt. As a Ninja, I know all about spirit energy. I summon spirit energy to make sweet chops and hella tight roundhouse kicks. But I had found that I could do other interesting things with my ninja spirit energy.

I lowered myself underwater. Bob had completed the first chapter first and was practicing the Suzuki method. I concentrated on the warm water around me, and I made a contract: I would sacrifice one day of my life for one egg. My root chakra began to pulsate. I came up above water to gather my breath and shout, “I’ll show you, you dumb excuse for a teacher!”

The class turned around to look at me with tired, exasperated expressions on their faces. I was being very disrespectful. Meanwhile, Gretchen had just mastered “Auld Lang Syne” while Bob was still practicing the Suzuki method. I could feel my nerves and tissues being taxed by the resolve of my will to lose one day from my lifespan. You might be thinking at this point of how long I have to live, and I can tell you that I will die at the age of 58 and a half. The microscopic fibers broke off from my body and were converted into glowing spirit energy. The spirit energy began to coagulate in my rectum.

“So, as you can see and hear, and dare I say, feel, girls learn the violin faster than boys,” said the teacher. “In fact, the only instrument that boys learn faster than girls is the drum. Girls have good ears, boys have a good sense of internal rhythm. Here, Gretchen, have a piece of candy.”

The teacher threw a piece of candy into the air towards Gretchen and she caught it in her mouth, wrapper and all.

The class, as they put their notebooks away in their bags, turned around, with the same tired exasperation. I reached out, opened my palm, and presented the class with a beautiful, human egg. The class sighed, shouldered their bags, and filed out of the room.

“We all know you had that egg up your bottom the whole time,” said the teacher.

“You’re a loser,” he said, “No matter what you do, no one will care. However, I’m glad that you put on your little show. You were very quiet when you were in the hot tub and I was able to teach my class in peace.”

The teacher walked out of the room.

I put my head on the edge of the hot tub.

“Well, I know you told the truth. And I love you,” said God.

Be the boy who can lay eggs out of his butt that you want to see in the world. ~ tyler malone