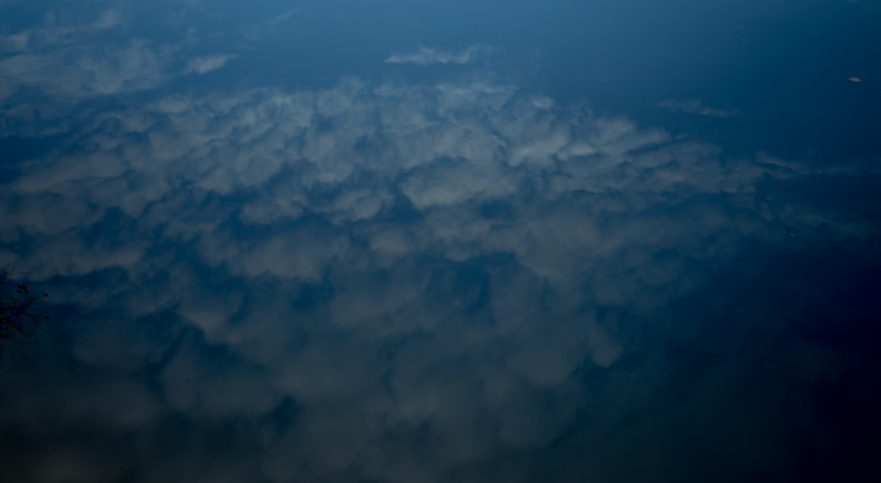 photo "Above, Below, Between Us" by Tyler Malone

An Excerpt of Sleeping Beauty

There was kiss me under the Golden Bough mistletoe, yes Virgil says it was gilt wholly golden, so named possibly from the clinquant tint the cut limb acquires when kept to wither glittering through a season. Was not the sun’s firelight, or a modicum thereof, supposed to radiate from this shrub gathered all in all to celebrate the two solstices even a tiny offshoot of which has been said to inspire Tiresian dreams if picked Midsummer Eve and put under one’s pillow? Parasite perhaps yet did not the above mentioned bard poetize Aeneas finding his way illuminated by dint of the glint of its yellow berries and rustling golden leaves twined in shining gleam about the boles of the shady holm oaks at the very gates of hell where he was guided by the fabled flight of a pair of doves into the immemorial depths of the nether woods to that double tree of glimmering branches? … Do not many charms and legends still hold that this Golden Bough possesses the magical virtues of opening locks and shielding against witches and trolls? Might a sprig or twig of mistletoe have been placed propitiously in my cradle? …

Anyhow this creeping shrub seemed to thrive in the edenic trees that burgeoned in unceasing superfluity and whose reapings ripened rife with lush forbidden fruits of life in the abundant acres of my own earthly paradisal palace grounds.

Where the apple reddens

Lest we lose our Edens,

Still, could there be an honest-to-goodness garden of immortality overseen by some great goddess of the two regions of death and life kindred to the isle of the classical Hesperides, where Atlas momentarily unburdened of the weight of the skies on his shoulders procured the precious golden apples only to be tricked into resuming his eternal encumbrance once again? Moreover did not these same far-famed apples, gifted to a suitor by Aphrodite, cause fleet-feeted Atalanta renowned for celerity to lose her footing in a footrace but featly win in love?

You see, I, at first blush, in my age-old flush of youthful truthful frenzied zeal, was seething inside with every last unanswered query and unrealized quest of antiquity.

I yearned as a female Gilgamesh, of the earth’s oldest epic, scripted in cuneiform by the first namable author of our world, Shin-eqi-unninni, whose ancient tablets portray one who saw all— even the sunlit vineyard duende dwelling of Circe-like Siduri a hedonistic young womanish fay, plus the Garden of the Gods where trees were hung with precious stones— who knew all— he discovered the great Mystery, the Hidden— and who recovered the knowledge of all times before the Flood, journeying beyond the distant, beyond the limits of exhaustion, to finally carve his story on stone of lapis lazuli. Yet I would probe deeper, heedless of his dream where the heavens roared with thunder and the earth heaved, then came darkness and a deathly stillness over all, followed by lightning bolts lashing the ground, fires blazing out, and death pouring from the skies. In the vein of other classic heroes while curiously akin to that hotheaded king precursor of Herakles habitually called Hercules, I too would make the gods shake in my pursuits of mystic verities, or in semblance of the goddess Ishtar I might pull down the Gates of Hell as well, although, also as Gilgamesh, wherever I went, wherever I looked, there might stand Death, and I might weep and wonder for whom my arms had toiled, my legs journeyed, my heart suffered so.

Like Lilith, haunter of lonely deserted places, from dust created side by side with Adam-the-man-from-earth-on-my-back, I longed unlimited, gusty-spirited wind-winged wild-haired succubus night-daemoned lamia-lost lore-linked to Holde sky-rider white lady of wells lakes rivers overseer of flax farming and spinning or shape-shifting snake under diabolical Algol’s unholy winks owing to a dark eyeless star orbiting round.

Would-be inquirer I wished to delve into arable soils of puzzling principia from the little scheme of Pythagoras through Witten’s theory of everything— had I mind enough, time enough, eye enough— onward ontologically— to end up who knew where.

Were there white holes— hill hummock hiatuses— as well as black ones? What who where when why how were time warps? And if that, then might I weave my wending way within, through the loom, into that arcane fabric of weird woofs and wefts? Could I lose my sole self in a naked singularity… yet discover another I-me at an event horizon of wholeness?

A distaff Odysseus of course I was only just embarking on my own ten times ten times ten year maiden voyage home menaced by monsters of all shapes and sizes within without, marvelous and otherworldly wonders, witches, battles, shipwrecks, dangers right and left to be navigated betwixt and between, ever confronting the relentless rancor of tridented sea god Poseidon besides believed to be lord of the universe who actually preceded Zeus though customarily called brother of that Olympian aegis possessor and quarrelsome queen of heaven Hera and Hades or Aides ruler of shades whose lot cast him winner of darkness of night in the worlds above and below.

Emerging with the growing of the grain, I Proserpine would taste sweet pomegranate seeds, and also I, childlike as she, was not to heed my mother’s voice adjuring to return— but rather find myself enticed into embowered woods by e’er-enamoring narcissuses, yet let the gathered flowers fall in showers of pearly white and violet petals… and then grieve… in bitter anguish, mourn… a limitlessly long lament… the silken lilies’ loss…

‘Vouchsafe a prosperous voyage,’ to here invoke The Georgics Virgil penned in 29 B.C., ‘and smile on this my bold endeavor, and pitying, even as I, all poor way-wildered swains, at once begin’…

Ah so may we mais oui set sail…