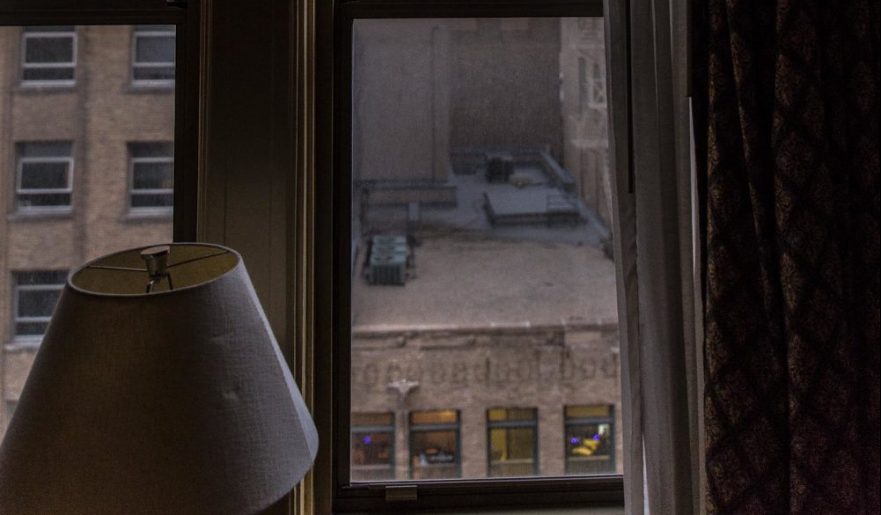 The last day of the Bi-Annual Industrial Fraud Conference had gone as poorly as the first two days. The unseasonably cold weather, the economy, an escalating series of unfortunate events had left Riley Babcock exhausted and defeated. It was his last night in Vegas, for God’s sake, but all he wanted to do was retreat to his room. At least he wouldn’t be hungry.

Riley slid his room card into the slot, walked into the small suite, set the bag the caterer had packed for him on the table, and slipped the brown calfskin backpack off his right shoulder. He took off his shoes. He loosened his tie but didn’t have enough energy to take off his suit coat. He went to the small refrigerator and pulled out a can of Fat Tire Amber Ale. Before he could open it, the room phone rang.

Riley was tempted not to answer but he reminded himself: I’m the adult in the room. Until midnight, I’m in charge. He picked it up on the fifth ring. “Riley.”

“You’ve had a long day,” said a sultry feminine voice. “Would you like a massage?  When you’re ready to relax and recharge a little, come into the bedroom.”

“You’ve got the wrong number.”

Her laugh was musical. “Oh, I don’t think so, Mr. Riley Babcock.”

Riley turned and saw the suite’s bedroom door was closed. When he’d returned to his room the last three evenings, housekeeping had left it open. He noticed things like that. He was a detail man. In the business of investigating fraud, details mattered. “What bedroom are you talking about?”

“Your bedroom. The one you’re probably staring at right now.”

He walked to the bedroom door. “How did you get in my room?”

“Don’t act so surprised. You’re an investigator. You know dozens of ways to enter places you have no business being.”

“Do I know you?” he asked. What a stupid question.

“You knew me a very long time ago,” she said nostalgically. “I thought we should catch up.”

Riley hesitated. “And will I be happy to see you again?”

“The only way for you to know is to open the door.”

Still holding the phone to his ear, Riley did just that. There, on her cell phone, was a Rubenesque woman, in her early fifties, with flawless skin, full rounded breasts, generous hips, naked except for dark thigh high nylons and black heels, with shoulder-length rich auburn hair (probably a wig), impeccable makeup, tasteful accessories, and a precocious smile.

“I registered for the conference as K. H. Wendt. Wendt is my ex-husband’s name. You knew me once as Karen Hotelling.”

“Karen Hotelling?”  Riley examined her facial features, the rise of her nose, the high cheekbones, the large sparkling blue eyes, and the tiny ears, hidden in the mass of red hair. “Karen Hotelling!”

“You’re still the most gorgeous girl in the room.”

“Thank you for noticing.” Karen laughed and set down the phone. “I’m also the only woman in the room.”

Riley realized he was still holding the phone. He let go and it clattered to the floor. “Why are you naked?”

“I wanted to get your attention.”

“Mission accomplished.”  Riley stood there, unable or unwilling to move. The fatigue that crushed him moments ago had dispersed.  He blurted out the first thing that came to mind. “Would you like a beer?”

Karen laughed again, a laugh he remembered from over three decades ago. A laugh that still had the power to thrill him. “I thought you’d never ask,” she said.

Here’s where we are: carrying nearly forgotten names of those who are almost ghosts into an uncertain future. Expect haunts. Maybe in hotels, maybe on streets, maybe in the mirror too. ~ tyler malone

A bit about Paul: Paul Lewellan lives in Davenport, Iowa, on the bluffs overlooking the Mississippi River. He shares the writing space with his wife Pamela, an annoying little Shi Tzu named Mannie, and their ginger tabby Sunny. Paul’s short stories have recently appeared in Quiet Storm Magazine, Fragile and Remington Review