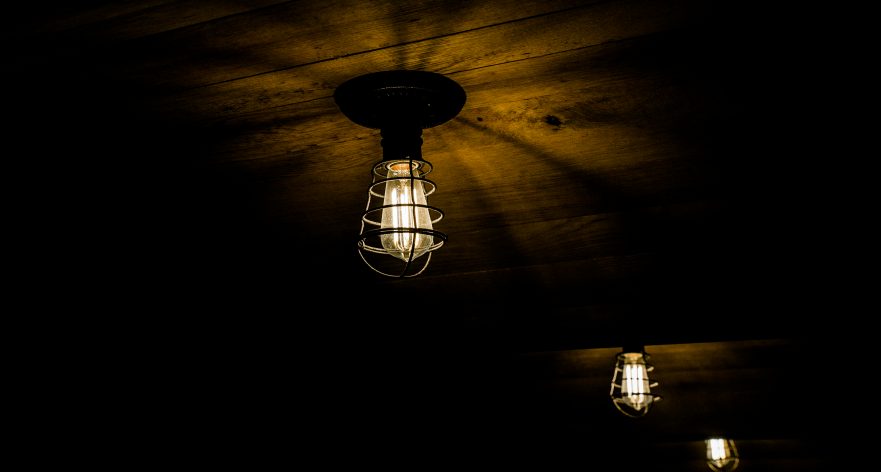 photo "What Light Can Tell" by Tyler Malone

Friendship’s the wine of life; but friendship new is neither strong nor pure—Bunko was reading Ernest Young’s Night Thoughts in your bedroom. Reading’s a practice you shared since the early days of your marriage. You smiled endearingly, watched his Adam’s apple move up and down, listened to his solemn baritone reverberate.

But that was two earth rotations ago. Tonight he shouts, “Muku! Witch! Get off my back!”

In the ironies of life, the poem was also titled “The Complaint.”

You shriek back, “The Devil himself has a name–it’s Bunko!”

“Look at your hair, like a sprig of a coriander.”

“Yours more like cobwebs on a broom with the face like a shriveled tomato. Not a tomato, too good for you. You’re a shriveled, rotten mango.”

Bunko suppresses a choke in his throat, says, “Wish me away, don’t you? Okay! Think I don’t exist. That should do both of us some good!”

Without waiting for a retort, he shuts the door behind him and steps into the unlit lane outside. You imagine him surrounded by monoliths of concrete, swathed in darkness. You think he’s viewing them with regret, some of the apartments housed friends he bantered with, shared the odd drinks with; until they traversed across life and embraced Moksha. You abandon him in your thoughts and unleash your own caged emotions. “Muku? Really?” you soliloquize, repeat the words again and again ambivalent to your surroundings. Two sets of parents seem to approve from ornate frames on the wall. Why, Muku? Wasn’t Markalieka good enough? He said it sounded cute, like the pooch you never allowed him to pet? Did he ever ask if you liked it? No! You’re cocooned in the belief it’s love! You’re together since ages, in the back lanes of Kolkata tugging at each other’s frocks and shirts before you knew it was improper?

Images of togetherness juxtapose with the causticities, distinct like they were yesterday, like edited reels of a cinema.

“And now he calls me a witch?” Your head feels too much of a concoction.

You retire to the veranda, switch off the light and recline on the cane chair. You go over the fights, over who is the one making coffee better, who is better at Sudoku, whose day to laundry–anything! Were they not increasing in frequency and length? And these games think I don’t exist, these weren’t a first either. They lingered for days. Morning tea sipped separately, Bunko over the newspaper sprawled on the bed and you on the veranda, Bunko petting his favourite invisible pooch, scratching its imaginary ears just to enrage you; you bringing Nick, the-little-monster-from-next-door, home.

Those periods of utter morbid silence, pauses, rose like fog in your bedroom, swept the veranda, moved around your archaic furniture and enveloped you in deathly frigidness. You gasped for breath until he smiled, touched you.

The night air carries fragrance that  smashes into your olfactory cells. Calendula? Or is it Jasmine? Attuned to the darkness, you hear crickets sing, a faraway pack of strays quarreling, passing cars on the distant street beyond the Library. You watch the sliver of moon dying on the western horizon. Moksha right in the end!

If Bunko didn’t come home tonight? The hand you held, the shoulder you cried on, the friend you’re your truest self with!  You listen to the despondency. Your empty apartment.

You imagine Bunko two blocks away from home sitting on a bench in the park. You picture him noticing other forms huddled in the darkness, embracing, kissing, faint voices wafting in the breeze. You imagine Bunko getting up, his aged knees folding involuntarily like rusted picnic chairs. You think he is carrying himself, unsure of direction, but towards home nevertheless,  pondering over these patterns of disutility of being. Contemplating unexisting. Without the moroseness, without this collapsing, shriveling body; without picking quarrels with you, by sparing you his own existence–Muku, the girl he was friends with. Muku, the woman, he married. Muku, who cares for him like no other on the planet. Muku, the chronicler of his very life.

You believe he is crying out: No! No! Not yet! And hovering near your doorstep gathering one more time to share his vulnerability with you.

On the other side of the door, you strain your ears to hear the doorbell ring.

A bit about Mandira: Mandira Pattnaik was at various points in her life a school teacher, an accountant's intern and a government worker. Her work has appeared or is forthcoming in print and online including The Times of India, Spark Magazine, FewerThan500, 101words, Microfiction Monday and Editor's Pick Juggernaut Publishing.