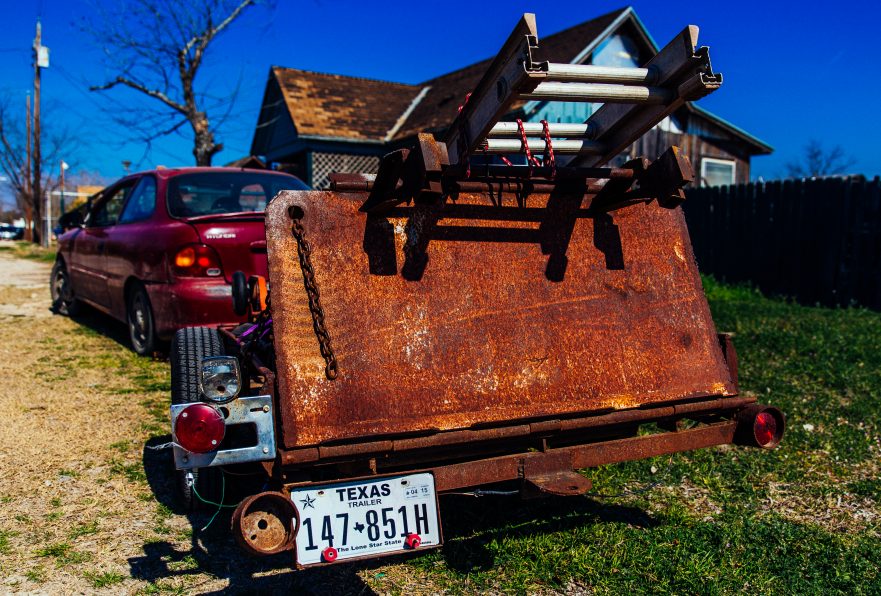 Around narrow trunks, thoughtlessly spread lights wrap bare trees reaching towards the end of the year. Etched initials on bark are all that exists, nothing lives in the trees. No shadows cover main street’s potholes as Christmas steps dry out on downtown asphalt, the only audience for strung lights atop closed businesses. By the nativity scene between a Spanish-speaking Baptist and a Methodist church, a Christmas miracle thrives–a bar’s “open” sign blinks.

Kent ignores an obvious Christmas gathering on the open dance floor alive with music he remembers from high school and takes to bar corner. Most nights the corner is for spiders, but on the best nights there are dropped dollar bills from dropped people.

Behind the bar straggle substitute teachers Kent hasn’t remembered for years. They pour beer to the top like they’re at a baseball stadium while Kent counts unwashed rings like a retired football coach counts losses. No TVs hang. What happens here happens in the dark. No ceiling, no floor, just drinks tall enough to fill gaps. A message from a recent ex buzzes and asks how he is. “Just at a bar for one drink.”

Over his shoulder, a voice from the dance floor asks, “Are we counting drinks tonight?” The voice fits perfect in time, only out of the past.

Kent hides his phone but his face brightens. “Absolutely not, especially tonight.” He pauses and surveys the dance floor and what everyone wears. “Your dress looks like champagne foil, what’s going on?”

“Who has their wedding on Christmas Eve? And at this place?” Kent orders another beer from an old substitute teacher, mimicking: “Whatever shes’s drinking.” His eyes look at the straw beer catching festive bulbs casting minimum illumination pushed upward by bubbles towards the thinnest rim of head a beer could wear as a crown.

“People we both know too much about.”

“People we went to school with?” asks Kent as country chords play Christmas music on its first jukebox tour. There’s blood on jukebox buttons. Country music is beyond criticism in any season. People will put down lives for it without putting down their beer. Here, music isn’t something to talk about, it’s to be survived. “I hope they don’t remember me the same way I remember them.”

Pointing towards drunks shuffling burning heels, the girl says, “You weren’t invited. They don’t think about you at all so don’t think about them. The world is a small town, expect familiar faces, expect people to remember you, but also expect them to forget to say hello.”

“You and I have history. You named a guitar after me.”

“I haven’t touched anyone or anything named Cheyenne in years.”

“When people leave, we know why. It’s when they come back, that’s what everyone doesn’t understand. But it’s Christmas, home or finding a place like home isn’t optional. And I know you never felt home at home.” After years shared, years ended in a great distance of silence between country cover songs, Cheyenne orders deep whiskey shots. “Me and devils have done so much to stay warm,” she says as their glasses kiss. “I want a smoke. Stand with me. I’ll quit next year.”

In dead night, motion is revving clean trucks with high school football numbers stuck to windows. Blackbirds line up on power lines adding to variations of darkness. Kent feels as if birds don’t have anywhere else to be.

“This is so gross.” Cheyenne’s tobacco catches to Bic flame. “But the bridesmaids won’t follow me because their husbands don’t want them to smell like smoke. Hope you don’t mind. You used not to.”

Kent massages his fingers, imagining what they’ve been connected to as they bend disconnected. He nods that he can handle smoke but means he can handle more fire. Cheyenne takes a shallow drag and asks, “Remember when we burned so many calories and skin off our knees on the baseball field?”

Kent smiles, ready for fire spreading towards him. “If the lights were on, our shadows in weird positions would have been burned into the outfield. I remember so much: mud prints, thunder over hills, losing my class ring. In my head, we were so loud but it was probably quiet, just our heartbeats like train horns. Since then, have you–”

“We’re not counting drinks or lovers. But do you hear that?”

Cheyenne takes Kent’s hand and rests it on her chest. In still season, voices escape walls. Spanish harmonies and Methodist praises collide against country atmosphere as truck tires tattoo asphalt with circular shapes spelling out how time matters most no matter what is spelled out. Sound assembles and brings its gifts to the city’s manger with lights hanging down to ignite innocence meant to be slaughtered so music can sing songs of salvation under darkest sky as occasional streetlights cast light over two who weren’t ready to say goodbye or find home as colorless swirls straining for moments as Cheyenne presses hard into Kent’s hand. “Let’s let our shadows burn,” she whispers as they walk to find one another as they did years ago. Cheyenne drops the cigarette. It joins a paper congregation among lost rings, long drives for short flings, and music that’s never lost but waits seasons to be heard again.

On this Eve of eves, two seek refuge. No room, no inn, nor manger; just shelter in each other and songs of the season. Noel! – mh clay