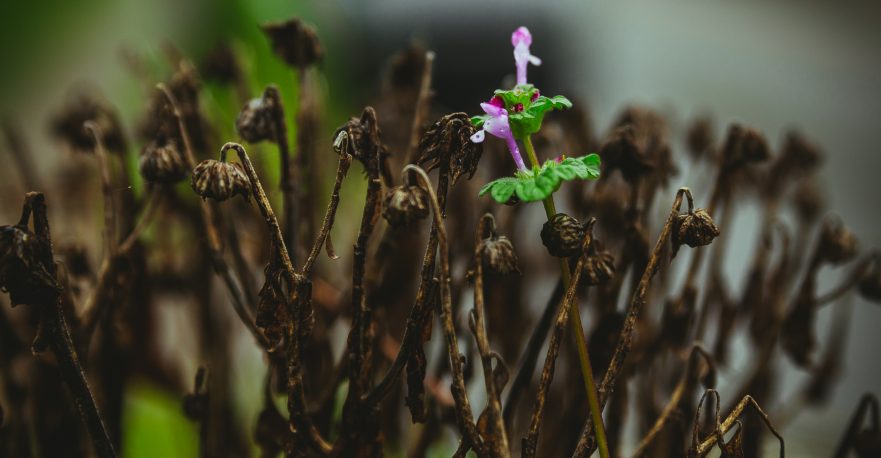 photo "Living Among the Dead" by Tyler Malone

It was one of those lazy November days, the sky was a blah grey, with an impenetrable fuzzy blanket across the sky. I pulled into the driveway of my condo, just in time to find something to eat and watch the PBS Evening News. My late husband inculcated the importance of this in me, and it was now my duty to keep up with our ever-changing world.

I hadn’t a real friend in Willow Dale, as our condo was called. Removing my pantyhose as I walked inside and also my shoes that pinched, I went over to the glass table in front of the television, and picked up one of three remotes.

Click. It went on. I was half an hour early. Thank God for the mute button.

Undressing, I stuck my head in the shower to rid myself of some of the grime of the day. Joanne’s boyfriend had dumped her, Ted had another fit when he saw someone park in a disabled only spot, and Ed was doing great as a tour guide at The Grundy Museum.

These were my clients at The Atrium down by the wharf in Bristol, PA. At lunch I’d take my peanut butter and jelly sandwich plus an apple and walk to the Bristol Wharf. I’d sit on a stone wall and watch the waves go up and down, up and down. My head would clear. Occasionally a sea shell would roll in and I’d put it in my pocket. At home on that glass table, the shells were spread out. I had no idea that in time they’d lose their color. When I found a conch, I’d hold it up to my ear and listen to the sound of the sea. How I wished Jim and I had children, but his damn heart finished him off.

I tied on a yellow silk robe as I pulled a frozen dinner from the freezer. Although I’m not an orthodox vegetarian, I put the meatless lasagna into the microwave, and pretending I was playing the piano, used my fingers to set the timer for 17 minutes. Exactly.

My Joni Mitchell CD Blue lay on the glass table. Was this before or after her stroke? Sitting on my soft pink sofa, I surfed the channels.

Ding! God, I was so tired, but removed the dinner from the nuker.

“You will not burn your tongue,” I told myself as I blew on the dinner, the smoke swirling toward the ceiling. Returning to the kitchen, practically limping from fatigue, I brewed a cup of Dunkin Donuts from the Keurig container. Had they purposely made it so much fun?

Everything was now ready. What a great life I had, truly. Jimmy would be so proud of me. His was an inherited heart condition but we thought he’d live at least into his forties.

Sipping on my hot coffee, the distinctive theme song of the Nightly News with Judy Woodruff came on. Her blonde hair was so thin I thought she might be wearing a wig. And most watchers know she had one disabled child, operated on by Ben Carson. Not for me to tarnish the idiot’s name.

Judy’s voice was cracking. We hoped we wouldn’t have to tell you this news, she said, but Gwen Ifill has lost her battle with cancer. She had been struggling with ovarian cancer and had the best doctors possible. Her family was with her at the end and her strong faith in God sustained her.

I had of course noticed her absence. This is our television family.

Standing up from the pink sofa, I sobbed hysterically.

Sure, I’m a psychotherapist, but I wanted to listen to Joni Mitchell in the worst way.

I pressed a remote I’d marked with red nail polish.

“Just before our love got lost you said
I am as constant as a northern star and I said,
Constantly in the darkness
Where’s that at?
If you want me I’ll be in the bar
On the back of a cartoon coaster
In the blue TV screen light
I drew a map of Canada
Oh Canada
With your face sketched on it twice”

The News Hour droned on. I paid no attention and took a big bite of the lasagna to fill the emptiness in my stomach.

Then hardly knowing what I was doing, I slipped on my beige bedroom slippers, and walked out the front door.

Fluffing up my shoulder-length blonde hair, I walked next door. A man lived there. We often said hello in the mornings. He seemed to be terribly old but what did I care?

I knocked on his door with my bare knuckles. Pain, I knew was a big distraction from misery.

He held a drink in his hand. A drink “drink.”

He held open the door.

Towering over me, he said, “I think I know why you’re here.”

The television was blasting in the living room. “The Nightly Business Hour.”

I fell onto the couch and began to sob.

He sat next to me.

I lay on a cushion that looked as if it was made by the Amish.

He put my feet up.

I slept there the entire night.

We didn’t even know each others’ names.

Misery doesn’t love company, it demand its. Like God, it creates a world to worship it. ~ tyler malone