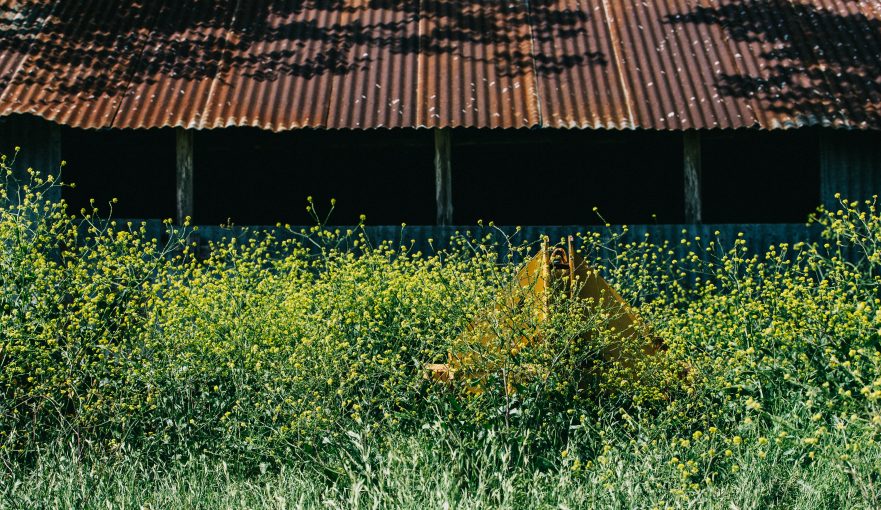 The sun on the bare rock-tip is raspberry, above the mingled white of snow, green of wood.

Ioana was from beyond that mount. Maybe she returned. He still lumbers.

To his shy heart the bears had been strength. The wood had been a playground. At fourteen he had only known the closing of possibilities.

He feels the blood in his cheeks.

By twenty he was living in the wood.

Like some other bears he leaves food at his sister’s door. Some leave food at their mothers’ doors. His mother died. The town painted her door that spring when the bears lumbered through. He had seen.

He was alone since the cub left. He was alone since Ioana left. He would bathe himself. He would talk to others about corn, fishing. They would watch his blue eyes. He would think about how he could take extra food to his sister’s door. He might clench his jaw until the twinge shoots through the nerve of his right lower first pre-molar as he hopes they won’t have to club anyone this season.

When he sees blood, pulp he suffers acid reflux. It started when he hit a man so hard the man’s eye bulged out from its socket. Blood sputtered in the corner of the eye, raspberry, spreading around the protruding orb. He vomited that day. Each time since, the sight has caused reflux. So, he tries always to keep distance from the more violent.

His life is placid. Life remains easier than he imagines it would have been in town.

He turned, laid his chocolate fur across the second from the left of four large, bare rocks. Already, the empty-black fur was drying on the rock to the far right.

There was a high yelp from the splashing up-river. He turned to glance. Arms flapped in the water. A large bear rose from the water with a cub on his shoulders. He turned from the bear, cub, stretched his sash-pouches inside his fur. On the gray rock’s gentle curve, he straightened the sash of blue, yellow. It held răşină, zmeură. He lined the second sash, green, thick with thin strips of dried lostrita, beside the first. Then, he closed his fur around the sashes. He placed four small rocks on the closed fur.

He walked, naked, into the deep pool by the four rocks. Everything of him pulled in. Then, with a breath, he pushed everything out against the cold. He listened to the downstream river rushing through a rocky shallow. He watched the water stretch to white, throwing itself into the crevices, over crests of the rock.

He smelled the first, watery hint of fish being flamed.

Something brushed his right ankle. He looked down into the water. Something dark moved away into the shade of the four large rocks. He began to scrub the skin of his arms, chest with the palms of his hands, working the hairs, some yielding, floating toward the shallows.

When the splashing of steps behind him began, he stopped scrubbing. A cub dipped down in the water to bring it to his own chin.

“You got a tent for the night?” The cub was waving his arms under the water’s surface, like he was treading water. There was a smile to the cub’s mouth. A thin, bald scar ran through the dark brown of the cub’s left eyebrow.

He looked at the cub, at the dot-point of his nose, then into the cub’s brown eyes, “Răsucire.”

The cub’s smile spread as he turned, brushing droplets from his buttocks as he left the river.

Most made their way to the flavor of the fire’s air. He saw Empty-black standing by the fire, holding fish to his mouth, his head rocking with laughter, bits of white flesh caught in his dark beard, mustache.

Upstream only one bear, one cub remained. The bear swatted the river with the long curves of its claws, then looked to the cub. The cub leaned, stretched its arm above the water. Lowering its claws, it tipped into the water. Rolling upright, it stood leg-deep in the river, the fur of its neck dangling, matted, low enough that the water running off it was an unbroken line between fur, river. The cub plodded back to the bank, shook. The bear looked to the cub, then began again.

Downstream from the bear with its cub, two cubs were kissing, leaning on their sides against the bank where it was steep. The taller leaned in; Hair swept across his face. The shorter slicked it back. As the hands rounded to the base of the other’s skull they pulled the taller cub closer.

He goes for his răşină, zmeură, nestled in fur, beneath the small rocks. He doesn’t wait to make tea, sucks a plug. He always uses the sweetest berries. The plump, bright ones. His tension begins to melt, standing, leaning against the rock. The sun returns his warmth. There will be time before the feeling from the plug pushes out. He moves the sashes, climbs his rock to lie in the sun.

Eyes closed, words surface: ‘Lupte de ordine.’ That was how his mother told his father. His father said something like, “screw.” Then his father left the three of them.

As the comfort of răşină, zmeură met the warmth of sun, he sat up. He saw the smoke reached across the river now. He watches the river, a fractured, clouded clear, atop greens, browns, silt, stone.

Some days, it’s best to get by with nature in the palm of your hand, at the tip of your tongue. Running through your blood. ~ tyler malone