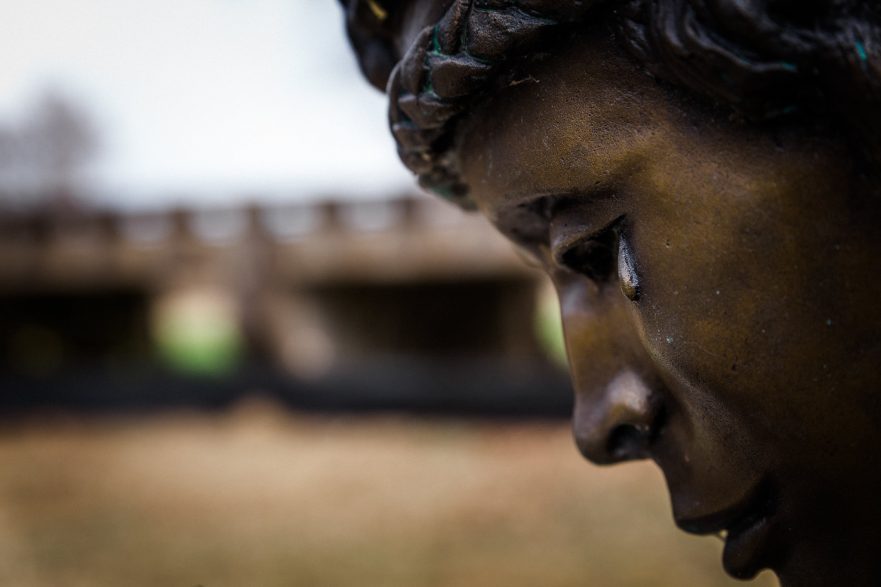 Fermentation tanks reflect last call exit lights. Finishing beers, the tenth or fifteen, as taproom lights fill in our accidental drunken Thursday. We’re the only two drinkers at midnight other than the bartender who drank to not be our third wheel. We walk and all that watches is the moon, a misshapen fish eye from a broken body of water.

With cans of to-go beer, we head out into a small town that just discovered summer: everyone’s in houses and hiding from hot nights. “All these business’ strung up lights, it looks like a constant prom night.”

“Proms, I can’t remember when we didn’t have a prom in that damn inn’s ballroom,” I say pointing to dance hall glass as dark as a rented suit that’s seen too many prom nights and mid-day funerals. Mesquite trees line the windows down to a creek running as a bridge between the brewery and inn.

Back in high school I remember drinking too much coke and peeing outside on the inn’s wall. It stained in the shape of a heart. Not a cartoon heart but a sliced organ, actually more of a fin.

Moving around her six pack, she grabs my hand as we walk onto the grass grading downward to the creek. “I have no idea why we never went to prom together.”

“Probably because you painted your nails black with permanent marker.”

“And you smelled like pizza grease,” she says. “Gas station pizza.”

“All that was years ago.”

“Looks good on you,” I say as we walk closer to rocks carved into benches by the shallow creek when she asks how I’ve been.

“If I could have faked my own death years ago, I would have”

“Not faking anything, I’ve been dying for years,” she says just as there seems to be nothing of past life except for beer in our blood. What makes our future if we look to the past? We follow slate water waves and shadows down, down, down to a rock that doesn’t recall names or bones but so many remember its chill on their legs against summer atmosphere.

“How we forgive ourselves for what we did not become, that’s how we can heal. And we have some years ahead of us.”

“But so much behind us. We have livers but that’s not our only baggage.” She shakes a beer free of the plastic cap binding all six together. She places the cans on the lap of a mermaid statue’s wrapped fin. She drinks and beer flows the same way as creek water. Younger, there was a girl who met me here at prom. We promised we’d marry one another at thirty and alone enough to believe in mermaids and promises. Creek flows as settled motion, going forward but only out of nature. Sitting, she wraps her legs over mine, resting a beer on her knee. Lights topping a thin bridge and stars flow over the creek’s skin as our hands cover one another. Creek rises as water rides the backs of a thousand catfish.

“What’s with the topless statue of the fish lady?” She points to the dark copper culture sharing our rock.

“She’s your only competition tonight,” I say as the mermaid sits eternal as the kids that sat before her story live on as gathering shapes in darkness. We touch one another but look to the shadows and try to read their stories. “She’s Sirena, a native American maiden. An evil catfish made a bargain with her: swim unseen with him every full moon for a year and the young brave she loved would love her back. Again, the only catch was that no one could see her. After their first swim, she swam to shore, walked out, and the young brave fell in love with her instantly. That was her true curse… Anyway, on the last full moon swim of the year, just as she was about to swim out of the depths of the night and walk to her husband, she was caught by a fishing hook. Her husband pulled her to the surface by her fin. But as the two lovers connected eyes, the catfish pulled Sirena down into the water forever.”

Topside light discovers us from the bridge. Headlights deepen the creek’s shadows and ignite the mermaid’s shelled breasts as well as living skin reflecting it all–white reflecting white. She soaks in stars on our accidental drunken Thursday; stars dead millions of years ago like all our relatives that are ghost stories.

“I want a relationship like that,” she says while I trace denim wrapping her thigh. “A catfish/mermaid relationship. He didn’t say sorry for giving her an unknown world. Everyone pretends to offer something new and all she had was her tribe. All I have are boys from small towns offering small worlds. That fish took her to an alien world. Under the surface, no sounds, and no broken promises. Just life. That evil catfish kept his promise.”

Creek waves call names and pull in secrets. Dragging the creek is how to share stories but she drags nails against my back as we see who we once were in waves. From Sirena’s statue falls a copper teardrop. Creek waters grows from there and are carried by thousands of unseen catfish that keep promises.

Our hearts are like teardrops in the flowing waters of life. ~ Mike Fiorito