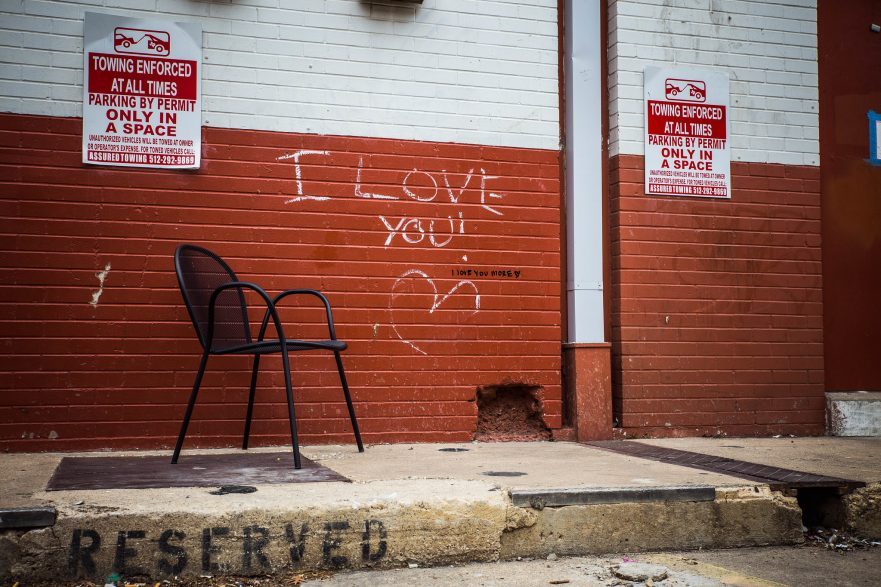 photo "Seating for One; Heart for Two" by Tyler Malone

Through the sliding doors she came one hip at a time: the most beautiful woman he had seen in his life.

It is a strange thing to suddenly find the most beautiful woman you have seen in your life. If you know this, then you are in rare company. Furthermore, you know exactly the feeling, and you do not doubt it. To others it is inexplicable, but this is how you know it sublime.

A rush of ancient endorphins– a budding, childlike awe– a sudden and certain faith in God and yourself and the United States of America. And last comes a gripping and strange sadness, perhaps because you know that you cannot remain here forever in the presence of beauty.

The long months he’d spent without Alice now vanished. Almost a year he had tried somehow to forget, wondering all the time if he had not made some serious error in judgement, and here was the answer. Ornery Alice wilted like smoke. If he were still with Alice, she would not have let him look at this woman. That was everything he needed to know.

He had read once that Homo erectus used to find mates at the watering hole. A hominid which fed itself properly was a good mate– naturally. He checked his cart and found that he had loaded up on fruits and the vegetables.

What the hell is the matter with you? came the avalanche. Very embarrassed– and very aware that his mouth was wet and hanging wide open– he shoved away into the frozen foods section.

I hope she didn’t catch you staring, he chastised himself. You can’t go around ogling women like that. What are you, some kind of caveman?

Out of the corner of his eye, he noticed the woman was now inspecting a mountain of inflated bananas. Still shy from his prior transgression, he pretended to read a for-sale sign in order to get a good look.

She wore a fur coat, a tan skirt, and black tights. Her be-hind was tight and plump and her dark hair was damp from the rain. With a petite hand she picked up two navel oranges, squeezed them, and bagged them. Then she yawned lazily, stretching her mahogany lips into an O, and turned her shopping cart toward him.

Look away! As soon as she wheeled his direction, he cast his eyes on the ground. But this time, he did not run. He thought of the long empty months without Alice, and he made up his mind that, if– and only if– he ran into the woman in the natural course of his grocery shopping, he would make conversation. His grandmother, he remembered, had met his grandpa at the corner store.

Now was the business of accidentally running into her, and telling himself it was natural. Five minutes went by before he saw her again; now, his heart jumped into his throat as she crept up the cookie aisle where he hung around. He hastily grabbed two Oreo boxes and pretended to read them, watching her walk all the while.

The hair on his neck stood on end; he had never smelled such a pungent aroma in his whole life: an intoxicant mix of perfume and shampoo. Now, he could see her in full. She had brown eyes, elfin ears, a curious, pointed nose. Wildly, he checked her left hand. It was empty. She walked right up next to him, until he could have reached out and touched her, and she turned to the Oreo shelf. It occurred to him that, just as his eyes were following her, she seemed to be following him.

This is it, he told himself. Now is your chance.

But what is there to say?

He thought very hard. Then, just as suddenly as the sparks in his chest had leapt when he first saw the woman, the fire blew out, and he drooped. Nowhere in him was there anything left of his ancestral courage.

How are you doing?

I’m good, she would say.

Tired of all this rain yet?

Sure am, she would say.

He cursed deep inside. Then they turned towards each other at once, and their eyes locked for one flaming moment. On their lips sprawled the parallel message: a flat, awkward, deferent half-smile, then the ghost of a nod. Then came the aversion of eyes, and the sensation of burning flesh, and the singular, death-knell acceptance that this was not the time or the place for behaving like animals.

Oh, he thought miserably, how I miss Alice.

What to do with the world behind us and the world in front of us? It’s up to you but don’t you dare stay stuck between the two. With that static motion, then you peaked at the past. ~ tyler malone

A bit about Hunter: I am the publisher of Bottom Shelf Whiskey online literary magazine and a contributing writer for Richmond Magazine.