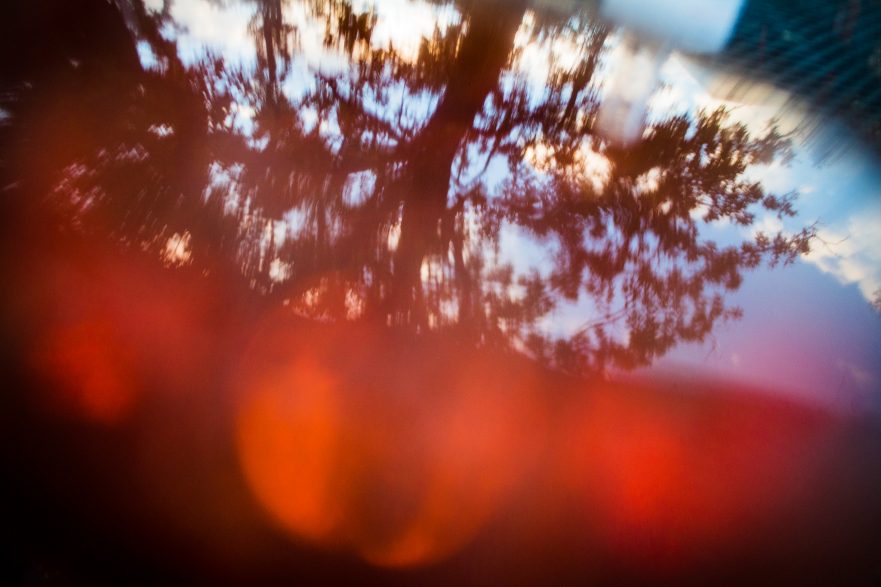 Picking Up the Thread

Rumor went round and round the land and even abroad of a most beautiful sleeping princess Rosamond, as you know I was called, who was encircled by an impassable thorn thistle which prickly creeping hedge had plot-thickened year after year after year for nearly ten decades and that within that intriguing aculeate spinney lay a hidden palace entranced in an eldritch spell. Now all that was visible of this enchanted castle were the tiptops of its towers the tallest of which sported a pivoting vane that danced round and round in aeromancy, swiveling round pirouetting round freely to point the compassing way of the whimsical wind.

From time to time kings’ sons would come and go trying to swagger stagger dagger bushwhack their way through the stabbing bramble boscage. But sad to say not a single one triumphed as upon entering the spiny-spiked barrier of whipsawing underbrush each was gripped hors de combat by knifesharp spindle thorn fingers which prohibited his passage. These unhappy prince also-ran gallants expired lamentably indeed by starving to death (quel dommage!) checkmated in the falcate clutch of their pectinate prison. The glare of the sweltering sun and wail of prevailing winds snow-whitened the bosky bones of the unsuccessful swains to remain as glinting cautionary tales that could be glimpsed amongst the biting briers by all would-be beaux who brashly attempted to follow suit. But few were those soliciting suitors who sagely heeded the warnings therefrom to eschew getting trapped in so hideous a demise.

Circa a long long centurylong many a twelvemonths later, there bechanced to meander along into the umbrous woodlands of that kingdom a rambling quixotic tramontane lad of true royal cast no scamandering sancho at his side who spying the spires rising to finials midst the dense copse began to inquire erelong as to their palatine tradition.

All answered according to what had been gathered from local gossip.

Perhaps it was a ruin of a palace possessed by spirits. Then again this might be the preferential haunt of sorcerers, necromancers, or covens of witches and warlocks for celebrating their sabbats. It was also bruited about that an ogre inhabiting that castle caught and carried off little children to be cooked thither in caterance to his insatiate appetite for succulent human flesh.

Furthermore the fellow heard tell from an aging gray-locked peasant, whose legendary story had been tralatitiously passed on to the doddering rustic from his defunct grandfather, of the longevous sleepspell in which I had been fated to lie for a hundred years.

Luckily for my Rosamond-self, the waxing wooer chose to accredit the last historiette and proceeded to seek his aspirant fortune by means of mine.

What secrets are those cloud-capped towers whispering above that distant castle? Do they seek the company of the moon and stars? What geomantic antiphon do they sing to the mountains? Why do they seem to beckon? What cryptic lore have they in store in their xyst recesses?

Yonder castle is said to be ensorcelled in a century of sleep. Within its tower lies the princess Rosamond awaiting the crowning kiss of true love. She cannot arouse till her onymous prince comes to waken her.

Was I scripted to be he? Does she call out to me? Or does the breeze simply tease a siren song through the trees? What liquid ditty floats, pealing out, in carillon appeal, a sirenian bell chime— dugong… do go on… it’s time?

Whither wander I? For what?

Hardly in my maddest escapade or dream charade…

Yet… by Jove… by Scipio’s somnium… I don’t know why… but I want to try… to rescue the sleeping princess in the tower of that castle.

With or without hoity-toity hauteur… muckamuck king’s son or not… bust my britches… I just must!

Oh Beowulf, great Geat, of bear-like strength, slayer of slews of marauding monsters and fire-breathing dragons, who, backdropped before your historical canvas, even slew with magic sword a water-troll beneath the sea, you, whose bleakly doomed world-viewed homonymous weird wyrd offered only fatality and the certitude of death midst fighting and feuding, banquets and bacchanalia, you, yes, you nonetheless began heard winged words in our richly worded mother-tongue— abounding in bardic bartlebied analogues and deftly fused with folktales, chronicles, legends, sagas…

Ah, might I, aye I, princely prince to a princess of archetypal ethos, no more to dwell in darkness, bravely pass whole through my own thorny battle, and be, one wondrous once-upon-a-time, collectively conscious epicenter of a sweeping all-exhaustive epic, replete with “music of the harp, the clear song of the poet, perfect in his telling of the remote first making of man’s race…” as, Beowulf, were you!…

But, that’s way… way too grandiose…

Far… far advanced of where I am.