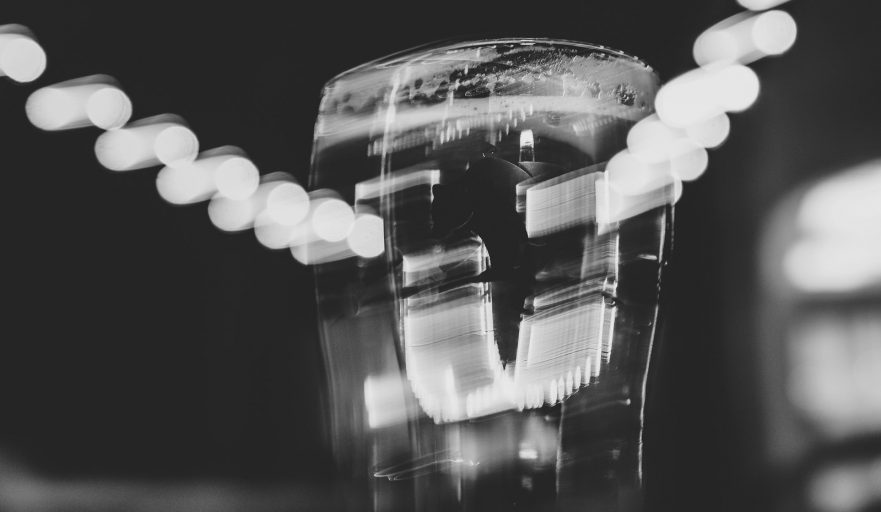 The alley you’re walking down is dark. It is the back end of many dive bars, illuminated by the opening of back doors as some bartender takes out the garbage. The green of large, metal, rectangular, Industrial Waste Company trash containers lines the route. The smell is rancorous; a revulsion that immediately makes itself apparent. There are oily patches everywhere where the trucks have come to make deliveries and empty the containers. As you walk it is silent except for the sound of a sticky squish from your soles. The alley is narrow. Snatches of conversation come from waiters, cooks, bartenders and dishwashers in back smoking, lounging on break.

A man is hunched over puking next to a garbage container behind the Anchor Bar. You come near to passing by him. You are in the middle of the alley as you walk. You try not to look but he calls out to you as you attempt to walk by. “Hey! Hey, you!” You try to walk faster but he’s coming over to you. He’s disheveled, dribbling puke-spit, sputtering, “I’ve got to talk to you!” as he grabs your coat. You look at him and meet his eyes all the time you’re trying to back away. You’re clutching your pepper spray canister and on the verge of firing into his reddened bloodshot eyes. You knee the son-of-a-bitch instead and cry out loudly “Hai!” in Japanese. Physical exertion and four shots of spray later the man, a 1970s hippie, is down and bloody. He’s not out but lying face down bleeding and dry heaving. Another shot of pepper to the side of his face while he’s down (to make sure he’s blinded at least in one eye should he try to get up and come after you) and you’re off, moving further down the alley. And then you stop, turn, and realize the man is dead. At least, he stopped moving. But you don’t care. You walk on further into the alley, into the darkness.

Some twenty-five feet on you feel a gentle tug. An out of the ordinary gripping sensation. A gentle sensation at first, it gets stronger and doesn’t go away. It becomes not so pleasant but oddly exciting nonetheless. Then it comes on very strong and swoosh, you are gone from your body and into formless swirling space. Your sight is inward now but inward looking out from a disembodied force traveling inexorably up into the black of the Cosmos for all appearances. You go on and begin looking for a Being – any Being or being – to explain or share this “soul-travel” experience with you. Seeing psychically with the mind’s eye, rising into dark matter. Then you meet them. The fellow dead. And they appear to be North Korean and not really dead but “floating-flying souls” like you. Shimmering in and out of focus, seated behind a panel of computers like a live music mixing board, the North Koreans looked at me: they all had groovy Kim Jong-un devil haircuts. But wait, you see otherwise. You see Kim Il-Sung and the 1950 North Korean Communist invasion of democratic South Korea. You see former dead soldiers now moved up to be currently dead, and apparently, all now and far into the past have been in fear of a loss of a time-sensitive “now”! It vanishes as a realization timelessness and infinity are now laughable concepts! Being “dead” is time sensitive just like being alive! Ergo there is no ego loss comes the corpse, and the old and crippling existential angst/anxiety is at a loss to effect! Life and death is smooth sailing no matter what the circumstances of your life, or your death! And that, psychos, is the way it should just not be.

Walk down the alley. Discover yourself. Before, during, and after you discover others. Let your life bloom as a true enchantment for all.

Here we are live for a bit. When past life, there’s so much more to see. Or believe we can see. For the dead, those sights mean nothing. So find them in life. ~ tyler malone