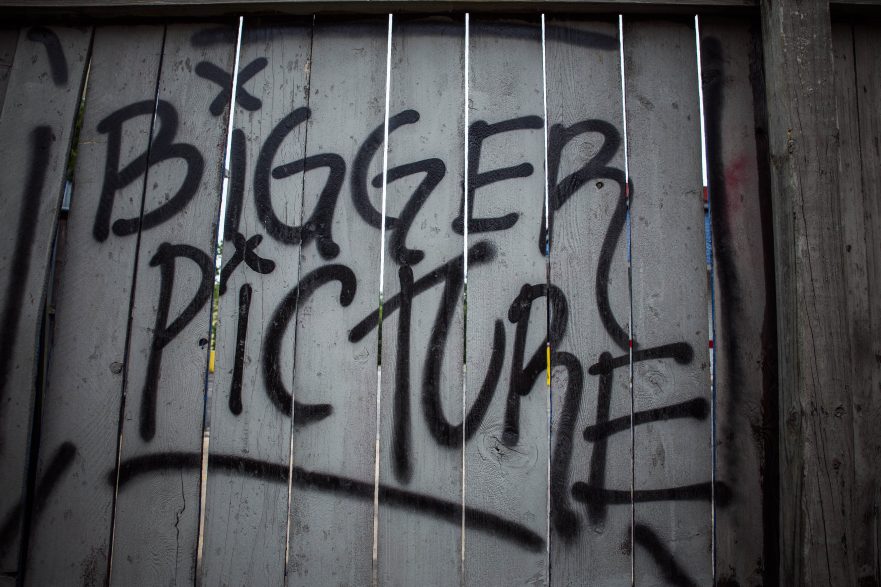 We kidnapped the barber with the stiff neck. I was against the plan but had only one vote. The rest of the guys were in awe of our friend from Princeton. He had a lot of family money in our small suburb. We called him Coney because his head seemed cone headed. His red hair and crew cut accentuated the look. At Princeton University, Coney was president of the Young Conservatives.

We waited until the stiff-necked barber was locking up his small shop near the train station and pulled to the curb and grabbed him in the dark. His barber’s name was Kyle but we never called him that. We were acting tough that day like Mafia hit men.

We took the frightened man to Carl’s because his parents were on vacation. We wore black cotton bags over our heads with holes cut for the eyes and mouth.

We took Stiff Neck down to the basement and sat him on a low stool and put his head in a vice Carl’s dad had on his workbench. He gave us no trouble because Sunny had a gun. It wasn’t a real gun. He’d made it from a kit he bought at Al’s Hobby Shop, but it looked real.

Coney, who had got into Princeton while all the rest of us went to Western Illinois University in Macomb, thought people should look the same and be the same. I never got around to asking him why he didn’t die his red hair brown. I was outnumbered.

I had been hanging with these guys since we started school at Hawthorne Elementary. We were now home from college for the summer break and bored. I was mowing a few lawns for spending cash but mostly I sat around doing nothing with the guys. Coney’s family had three cars but his dad didn’t let him use any of them much, but he’d got one for tonight. Way back in the early 1960s a lot of teenagers didn’t have cars.

Once we had Mr. Stiff’s head in the vice, we tried rotating his body from the shoulders. Sunny put his fake gun close to the barber’s heart. The stool was on casters. We thought it’d be easy to break the psychological spell that locked up the barber Kyle’s neck.

We talked gruff, imitating mobsters, hoping he would not recognize our voices. As kids the old man had cut our hair. He had to move his body around the barber chair because he could not turn his head. It freaked me out when he shaved my neck with the long straight razor he first sharpened on a long leather strap that hung down from his chair. He told me he’d never seen anyone who had hair grow so far down the neck. Was that him cackling behind me, as he shaved my neck, or only static on the radio he kept on the shelf with his barbering stuff?

The stiff neck barber always gave me a crew cut even though I asked for hair like Elvis. I wanted it long and swirly. I wanted hair locked in place with this green goop you dipped your comb in and then smoothed through your hair.

It took me years to figure out that my mother secretly phoned Stiff Neck when I started to walk to his shop. She told him to give me a crew cut.

“I’m not on a crew!” I shouted at her when I finally figured out her trick. “If we had a yacht to sail on Lake Michigan, then I’d get a crew cut.”

Every time we tried to turn the barber’s shoulders to un-stiff his neck, he’d let out a scream. The vice we had his head in must have pinched his skin. We had his hands tied behind his back.

“Guys, my parents are due back home later tonight,” Carl said. “I think we better lay off.”

Carl was a gymnast at Western Illinois. In his senior year he was practicing flips on a mat, came down hard the wrong way, and became paralyzed from the neck down. Carl lives in a run down house in College Station, Texas now. I’ve visited him and he gets his wheel chair to turn by blowing air down a tube. That Carl, I love him.

It was around nine when we drove Still Neck back to his barbershop by the station. I thought we’d be in a shitload of trouble because we hadn’t blindfolded the old guy. He must know our town of Elmhurst and could later direct the police to Carl’s house.

I don’t know if any of the other guys were thinking of this, but I didn’t suggest a blindfold for our captive because I worried Princeton might say we needed to drown him in the Du Page River, or something worse.

I waited and waited for months for the shit to hit the fan. I figured we’d all do time, though Princeton might be able to beat the charge with the fancy lawyer his parents would get him.

But nothing happened. We, the guilty, went unpunished.

It turned out Stiff Neck took the train out of Chicago to his shop every day but Sunday and then took the train back. He didn’t know Elmhurst at all.

Now Princeton, our Mr. Coney, I haven’t seen him in forty years. I’d heard he retired from the Air Force as a Lieutenant Colonel and lives in Arizona. Sunny became an airplane pilot.

Me? I started an insurance business and still work in it. Our office sits on York Street, a bit west of downtown. People need protection from types like me. Stiff Neck went on doing what he did. His shop closed in 1983.

I switched and got my hair cut at another place in Lombard.

Revenge is a dish best served with a cold razor. ~ tyler malone