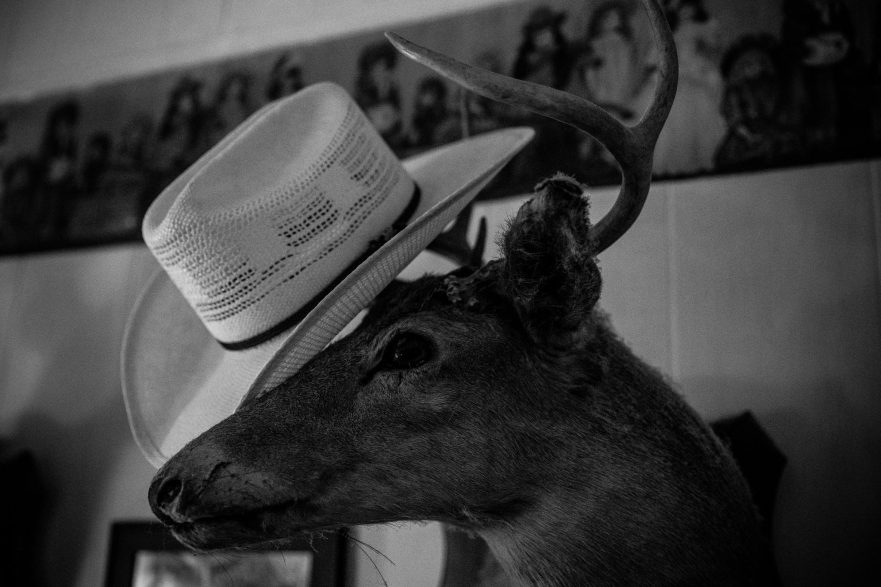 Antlers, still attached to frozen plastic bagged deer heads, stare as my husband sits into a sagged old lawn chair in our new garage. Old paint buckets to touch up new scratches we put in our new world pyramid around us. We didn’t need a map to find a home with one another, just a compass. But the damn severed heads should be in the freezer, no matter the temperature of the night, now colder and slower after celebratory move in beers crumple next to our son’s dropped different sized sports balls on the garage floor like a fallen galaxy around the propane heater central star. He’d still be rolling and bouncing his universe if his father didn’t run him off.

“Tomorrow, we’ll boil the skulls of those deer until the skin falls off. When boiling, the eyes go gooey.”

“Go gooey,” our son repeated as his father picked up two softballs and made a repulsive SQUISH sound. Added to the garage floor’s universe, the balls trailed two separate ways as my husband issued an order to go to bed.

The sound, not melting eyes, still sickens me. I cleaned the deer top to tail, hanged from a young mesquite in our new backyard. The organs fell and still gather at weak roots.

“I remember when nothing was here,” I say as I imagine the last drop of blood from the divaricated buck’s tail.

My husband, one eye on the grim ice to beer ratio, one eye on me, says, “Depends on the day, I guess. We’re here now so that’s something.”

“Nothing was here. Then great noise moved earth and people built houses so we can create great silence now.”

“I love that you care about stuff like that. And you know what?” I lean close to my husband, closer to the bagged skulls and to check if he will spill beer on his lap. He continues, “Our son is about to be as old as we were when we met. Fifth grade, remember?”

The past boils when nothing of ours was there, as we think something existed. Organs wrapping weak roots. It’s not true, nothing of us lived so long ago—other shadows of promised hope for others to be true hang from weak trees. But all that haunts this house, what haunts one another, is us.

“I loved you back then,” he says as his eyes trace paint holidays on the garage ceiling.

Looking at shoddy paint, I glance at his stolen shelved high school football helmets deep with gashes, colors cracked into one another. “I love you now. And you know what?” His red eyes shift towards and focus on me from the propane heater’s risen flame casting a heated umbrella on our ears. “I bet our house is built on an Indian grave site.” Pointing to the bagged heads, I say, “Those guys, they agree with me. It’s a good thing they’re blessing our garage corners. Even dead, they know what’s going on.”

He spins and looks at the iced shopping bags in shaped contours of nature. “Sorry about the mess. I love our new haunted ghost house and I don’t want to fight.”

“The only thing we fight is sleep, never one another.”

“And I always lose.”

“But I always win,” I say as I lose the eyes of my husband but continue to look at him the way a newly built, newly painted house looks at passing cars.

The dead don’t wake in our noise. We can’t sleep in their silence. Need to make our own. ~ mh clay