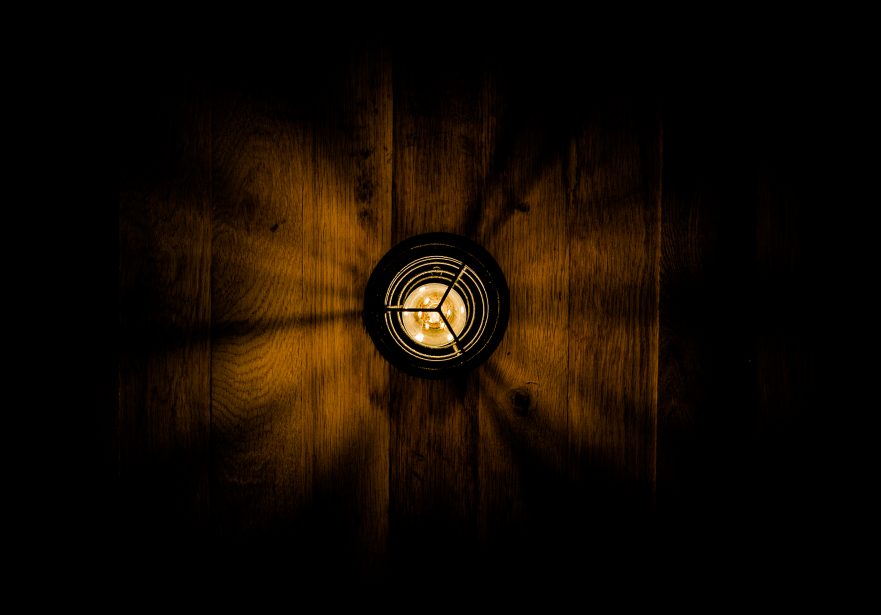 His name was Billy Ray, and he was anything but country. Billy Ray was the Peter Pan of the jazz scene during the 80s in Oklahoma City. The bass player had come of age in the 60s during the birth of free jazz. It was then he had found his religion and never strayed from the altar of Miles, Monk and Coltrane.

Billy Ray drove to gigs in a beat-up 1963 Volkswagen van. The van was a temple that housed his holy instruments. Eight basses in all, stand up and electric, plus amps were carried lovingly to each gig, resting upon orange-psychedelic shag carpet.

Scanning Billy Ray’s face it was hard to tell his age. He looked both genteel middle-aged and boyishly youthful, but his gray, scraggly hair gave away the real date behind his twinkling blue eyes. He looked more like a friendly college professor than a swinging jazz fanatic. His voice was tiny as if his vocal cords had been shrunken or he was in a state of constant inhalation. The prior possibly was true since he grew up in the Age of Aquarius when free love and drugs ruled. Times had not changed much for Billy Ray, even though the fear of AIDS had taken over the sex scene and cocaine was the new drug of choice.

Short in stature with unusually long hands and fingers, Billy Ray worked magic as he caressed the strings of his bass. Swaying back and forth as he played, his face scrunched up, lips moving like a priest speaking prayers over his flock, plucking notes from the air for half-drunk bar patrons.

Billy Ray walked into his Friday night gig at Tony’s Bar and Grill with a tall blonde on his arm. Heads turned not only because of her looks, but because the contrast of a short graying man alongside the tall beauty. His friends knew he didn’t date women over 22. It was as if aging was a disease he could avoid by holding court with the young. Older women were less interesting, or so he said.

Between sets, Billy Ray wandered over to the table where young jazz groupies eagerly awaited their mentors, sipping beers and eating nachos, the house specialty.

“Ya’ know,” he said while easing himself into the chair beside his companion, “it’s like sometimes when I play… it’s, it’s like I am not even there.” He picked a nacho off her plate and stared back up at the stage as he plopped the whole chip in his mouth. He chewed contemplatively before looking back at her.

“Did you hear that riff I just played? Like it came out of nowhere. Like I was possessed by Monk himself!” He grabbed another chip.

Blondie sipped her beer and looked at him, fascinated that he didn’t see the humor in his former comment.

“Man, Billy Ray did you just hear yourself.” she said, “I mean, if you are not here, where the heck are you? Who is this dude sitting by me?” She giggled, but stopped when he looked her in the eye like a puppy trying to understand human language.

“Monk” he said and looked back at the stage. “Monk, understands it all, he is like a God, a jazz God. He would get it.”

“Yeah, Billy Ray, Monk, is good I guess. Too bad he has disappeared from the scene.”

Billy Ray shook his head and laughed. His young friend was more into Faulkner and Thoreau than Miles and Monk. She was an English major from a nearby college. They had met one night when she was on the arm of one his younger band mates. Billy Ray got the girl, and the younger musician lost his gig.

“Have another nacho, man and find yourself before you go back on stage.”

“I love nachos.” he answered. “The perfect bar food. Get a beer and put it on my tab.”

Billy Ray knew the bar was picking up the tab because the house was packed.

“Look at this crowd. I know they are here for the music. Where else can you find the coolest jazz cats in the city?”

He scanned the noisy group noticing the age trended up, 30s and 40s. The younger crowds preferred rock or rap to jazz.

“I think they’re here for $1 beer night. But that’s just me. I am sure it’s for your cosmic playing. I think you were channeling Miles a bit.”

“No, not Miles. Monk, the great Thelonious. I am all Monk tonight.” He rubbed her head like an uncle would his favorite niece as he stood up. “Order me a plate of nachos for my next break. Tell the waitress to bring extra jalapeños ‘cause I am hot tonight!”

Stepping onstage, Billy Ray stood up his bass like he was handling a holy relic and started inspecting the strings. Slipping back into his own world he smiled as his quartet returned to the stage, nodding in unison as he called out their next tune, Blue Monk. Yes, he was all Monk tonight.

Blondie searched the smoky room for someone her own age as the band kicked off their first tune. Unknown to her, her days at the groupie table would soon be over. She would celebrate her 23rd birthday in two weeks and Billy Ray had his standards.

A bit Lisa: Lisa Moak is a writer, editor, musician, yogi and former expat who currently resides in Texas. She has published inspirational articles in Elephant Journal, but has a wide interest in all forms of written word from poetry and prose, to history and science fiction. When not writing, performing, or practicing head stands, Lisa is busy in her garden with her chickens and wonder dog, Bear.