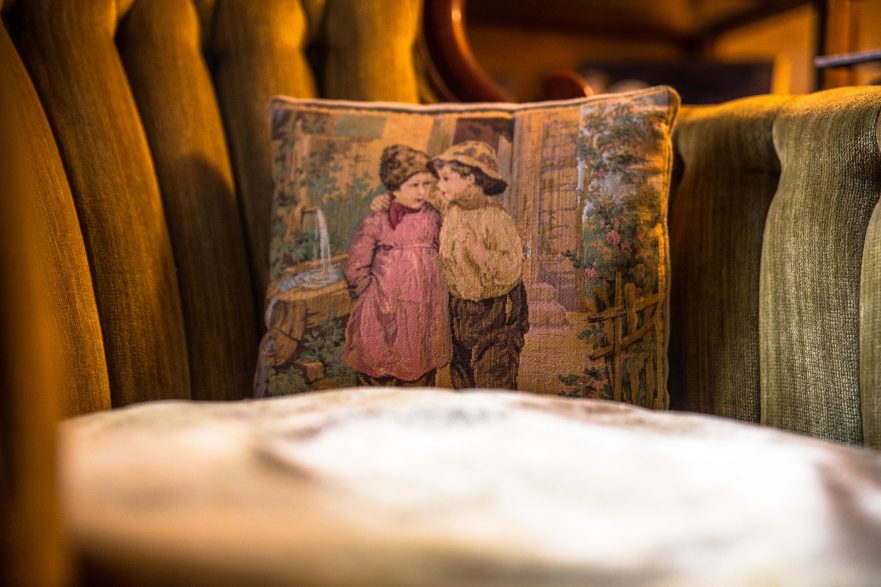 The princess speared her palm on the spindle cusp of the spinning spinning wheel and fell down senseless in a death-like swoon.

In the tower of the royal palace I Rosamond lay latent, alive in lifelessness. The legend of the Sleeping Beauty all dreamers dream and dread had come to pass.

“The princess,” proclaimed Venus, “shall not die, but in pure hearted innocence shall sleep for a hundred years…

“At the end of Rosamond’s century long sleep,” assured the divinity, “a king’s son shall come to waken her.”

In the ebb of the closing cadence of the sounded syllables of Venus’s benediction, which the grand gathering had graced from beginning to end with an enduring silence, and after the first fleeting hush, there arose amid the confluence a great murmurous sigh that undulated passim through the palace as if by vocal electric current— a great resonant sigh of sadness and relief that voluminously rebounded from floor to ceiling pillar to pillar of the royal chambers and reception hall— a great purling sigh held aloft in the rippling circumambient air in inarticulate echoes of solace and sorrow.

Then, in the winken blinken of an eye, the waving of a wand conjured a sandman spell.

In the royal palace all time seemed to tick to a standstill.

The king stopped speaking mid a sovereign sentence and slumped into a deep doze.

The queen sank into profound slumber on her golden throne.

The monarchial ministers drowsed in the midst of their duties.

The ladies-in-waiting lagged lethargically and lay down.

The lords snored away in billowed breaths.

The beadles fell into abeyance and pillowed their heads abed.

The sentries snoozed at their stations from pillar to post.

The jesters flaked out in frantic antics.

The japers nodded off when cutting capers.

The buffoons belayed their harlequinade.

The rogues prorogued their acti rei.

The clowns wound down.

The musicians muted their musicking and assumed an air of nepenthean repose whilst the lyric poets scaled the mountain-sides of dreams.

The courtiers conked out.

The clerks zonked out.

The pageboys yawned and popped off.

The doctors dropped off.

The dukes and dons diminished and finished.

The exchequers cut off their counting and logged Z’s.

The garbled gobbledygook of the wise men faded out.

The prophets petered out.

The comptrollers pooped out.

The maids of honor hibernated.

While in the great court kitchen the cooks went comatose.

The scullions segued into sopor.

The chef broke off boxing the scullery knave’s ears as each tripped into torpor.

The fire in the hearth froze.

The soups broke off boiling.

The sizzling skewers, loaded with partridges and pheasants, quit spitting.

The salads vegetables and fruits vegetated.

The syrups arrested their stirring.

The ice creams and sherbets arcticked.

The cookies candies cakes and pastries shelved their sweetness.

The nuts turned in.

The butter cheesed its churning.

The milk and cream settled down.

The breads and other sundry comestibles loafed.

The mineral springs went motionless and the well waters stagnated.

The Bries bleus Camemberts cheddars and vintage wines left off mellowing and ended their aging.

Even the flies on the walls droned tipsily and buzzed off.

The itsy bitsy spider wove a web of reverie.

The wizards waned away and wandered off to the land of Nod.

In the stables the grooms grew groggy and hit the hay.

The horses in their stalls were stricken into neighless hebetude.

The dogs in and out of the kennels took couchant siestas.

The laconic cats, interrupted in their dainty doings, catnapped.

The torpid sloths laid back their arboreal browsing and camouflaged as coconuts in palm tree crowns.

The cooing mourning doves put the kibosh on their woo-oo-oo-ooing to relax under the roofs’ eaves.

The peacocks folded their pavonine fantails and roosted far up.

The birds in the trees lulled their twittering and the songsters stilled their singing.

Neither bleated the lambs nor lowed the cows.

In the palace gardens the frogs semi-croaked in the ponds.

The snails turned sluggish and retired into their shells.

The buds on the branches bloomed no more.

Nary a leaf rustled nor a cloud rolled by.

The very winds and waters hushed their whisperings.

As all around the tranced castle were born thorn and thicket, thicket and thorn.

High high high above in the oval room of the tallest tower, I Rosamond slept my ageless Lethean century sleep atop my bejeweled dais—the sleep-perchance-to-dream sleep, the rounded-with-a-sleep sleep, the undiscovered-country sleep, the dreamed dreaming hundred year sleep of the Sleeping Beauty in the Wood…

We stop but does time? Heck no, it’s the only constant other than constantly knowing life goes and goes and goes with out you. ~ tyler malone