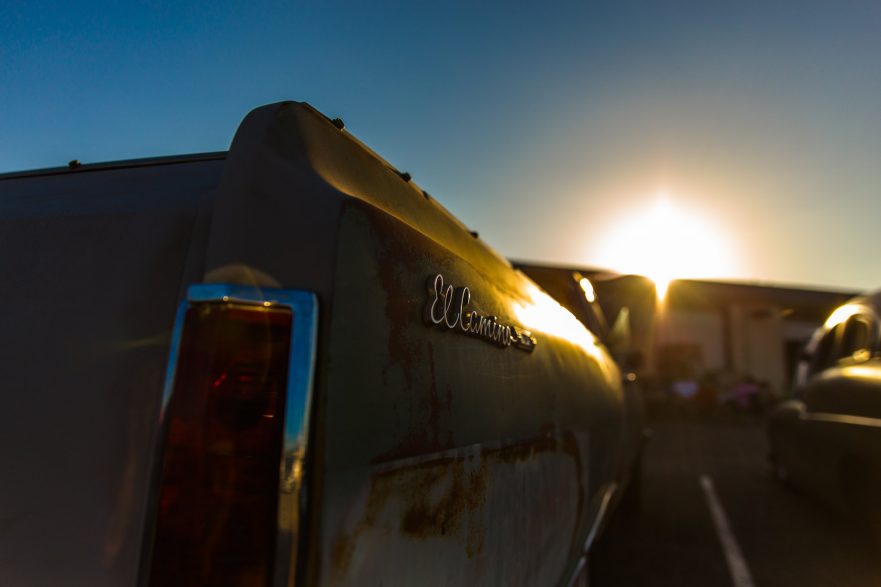 James was sitting in a lawn chair in the garage having a beer watching Becky’s two-year-old draw with chalk on the driveway. Not the way he planned on spending his Saturday afternoon, but with the washing machine broken, the kid’s mother had to go to the laundromat.

“She could’ve taken him,” his buddy on the phone said.

“No kidding; she pays more attention to that kid that she does me. I’m sitting here watching him screech and draw all over the driveway. And you’re heading off fishing without me. How do you think I feel? Hang on, I need to get another beer.”

James glanced at the boy in the driveway and went inside the house.

He opened a can of Schlitz, took a big swig, and then cursed the refrigerator door that swung and bumped him.

He looked at the small amount of beer spilled on the kitchen floor, “She can clean it up when she gets home.”

This beer finished off the six-pack, but he managed to negotiate the screen door, the steps down, and the walk back to the garage.

Leaning back with his eyes closed, James was enjoying his beer buzz and listening to the quiet. He was sound asleep when Becky pulled into the driveway.

She opened the car door and called to James, who was in a drunken stupor. No answer.

She stormed to the garage. “JAMES!”

James snapped to, blinked a couple times, “What?”

James pointed to the far side of the driveway. “Drawing on the driveway, right over there.”

“No, he isn’t. Where’s my son? You promised you’d watch him and not drink.”

Becky dashed into the house and madly called and searched for Tommy.

She came out of the house and ran to James, still sitting in the lawn chair. “Oh my God; Oh my God.” Becky pulled her phone out of her back pocket. “You drunk son of a bitch. How long have you been drunk and passed out? When did you last see him? What happened?”

Becky was on the phone with the 911 operator not waiting for or caring what James’ answers were. She hung up the phone, started crying, and collapsed in a heap on the driveway.

Three minutes later, a patrol car arrived with the lights flashing and sirens wailing. Becky stood up and collected herself when it stopped at her driveway. Two tall black officers stepped out of the car and approached her.

“Take a deep breath, ma’am. Let’s start at the beginning,” the gray-haired officer said. “Does the boy’s father over there know anything about the time the child went missing?”

“HIM?” Becky pointed at James. “He’s not the father. What kind of father would get drunk and pass out when he’s supposed to be watching a child?”

The officer blocked Becky’s path as she started toward James. He called to his partner, “Roger, why don’t you take her to the squad car and get a statement.”

“Got it, Sam.” Roger escorted Becky away from James and to the squad car. In short order, he had the scant information that was available on Tommy’s disappearance. When she stopped hyperventilating, Becky texted the officer a photo taken earlier that morning. Flashing lights announced the arrival of a second squad car.

After a thorough chewing out of James, Sam had written down what James could offer on Tommy’s disappearance. He suggested to James that he make himself either useful or scarce.

During the hubbub, James sneaked away and took off in his truck.

Roger looked at Becky and said, “Why don’t you start calling friends and family and ask if they’ve seen your son?”

Still dazed, Becky stepped out of the car and started texting friends.

Roger, accompanied by the two additional officers who just arrived, joined up with Sam. The four had a brief discussion, shared the recent photo, separated and started door-to-door searching for information.

Becky was inside on the couch with her knees under her chin, rocking back and forth, when her mother arrived.

Becky just rocked back and forth. She refused to speak, despite her mother’s best efforts.

Her mother fixed grilled cheese sandwiches and tomato soup for supper, but Becky’s plate was untouched when she cleared and washed the dishes.

After cleaning up the kitchen, she sat next to Becky on the couch and wiped away both of their tears. “They’ll find him. I have to leave and deal with your father. He never liked James, you know. I’ll come back and check on you later, alright?”

The doorbell rang as she was heading to the door. “Don’t get up, Honey, I’ll get that.”

The two tall black officers from earlier in the day were at the door. “You found Tommy?” asked Mom.

“Good evening, ma’am. Seems there has been a hit and run involving a pickup truck three blocks away. We were wondering if you could provide the location of the driver of pickup registered at this address, as the truck fits the description.”

“Did you find my grandson?”

She grabbed the door frame for support.

Becky just rocked back and forth.

The world is a small town. Everything we do affects most everyone. When you start, something stops. When you breathe, something else is pushed. ~ tyler malone