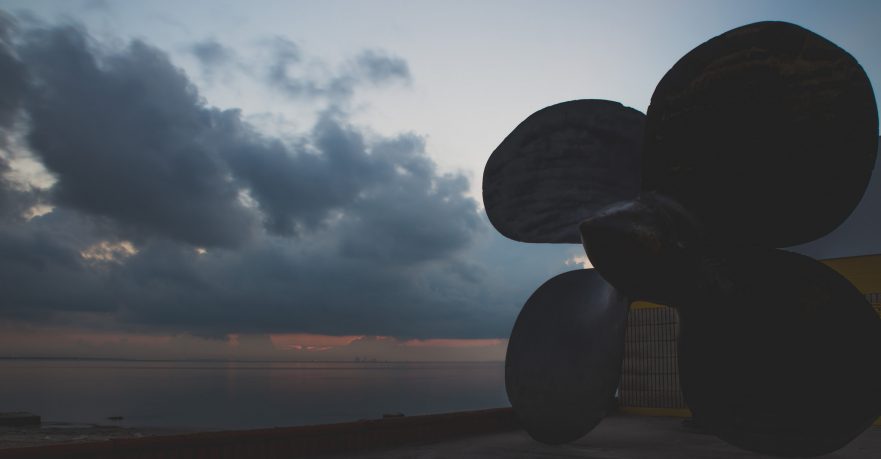 photo "What Thrives Below, Dies Above" by Ty Malone

It was near noon and the crisp, sea-refrigerated air had evaporated from the cove. The sun was hot, straight up, hovering above the inland ridge of mountains. I was on the rear deck of a trawler, down to my T-shirt. In my sweaty sunburnt hands was an electric drill, plugged into a portable generator on deck. Wiggling the drill bit back into its groove, I rammed it home through three inches of steel bar. I’d been cutting on this steel bar for the last hour.

The fishermen I found on the docks this morning were of a different spirit than the ones at the Ivory Inn. Like school children released onto a playground at recess, they jumped and hollered and cursed and laughed while performing their tasks. The floating dock beside each trawler was piled high with odds and ends from their cabin’s interiors: tin pots and pans, last year’s dirty dishes, blood-stiff dishtowels, water warped rolls of toilet paper, coffee tins filled with rusted nuts and bolts and screws. Alongside these more domestic items, spread out in neat orderly rows, laid new spools of nylon fishing lines; rubber snubbers; different lengths of gaffs line out like sawed-off baseball bats; steel clothespins; black nylon stopper balls, flashers—and, of course, lures. Lures as shiny as new coins off the mint; detailed with day-glo florescent paints; with gaudy feathers and tassels and jewelry; even one custom jobber with a pornographic photo of a woman on it; anything and everything that might conceivable lure the eyes of those fabled sixty-pound Kings all were after.

Descending upon the docks fresh after breakfast, I felt as though I’d been spliced into a frame of old World War II newsreel footage. The fishermen moved in double time around me. They’d paid me as much mind as they did the village dogs sniffing about (the dogs yelping and cowering as they were booted out of the path of a frenzied fisherman). All attention was drawn to the tasks at hand. There were poles to patch! Ropes to splice! Even above, along the boardwalk, nonfishing village folk had been drawn outside the doors of their shops to behold the activity below. It soon became evident—after I’d been jolted a few times by a stiff shoulder or elbow—that the only way I was going to keep out of the icy harbor waters (that I was already so well acquainted with) was to join in with the seemingly frantic dance of these men as they bobbed and leaped from boat to dock and boat again.

More than once, as I’d tentatively approached skippers or trawlers to inquire about work, I’d been issued a command before I’d even a chance to blurt out my reason for being there:

“Just don’t stand there with your thumb up your ass, boy! Toss me that line! Swing that dolly round here and help me with this crate! Quick! Turn off that faucet before we flood the forecastle! Goddang it, son! Move!”

And when I’d finally get around to announcing my reason for being there:

And down the line I’d go . . . running through the same routine on the next trawler.

Now that I’d finished the drill job, the skipper of this particular trawler I’d been working on magically resurfaced.

I could smell the whiskey on his jowly face as he reboarded. Motioning me aside, he wet the side of his thumb on his tongue and inspected the hole in the steel bar with it.

“Virgin, eh?” he said, smiling as he tasted the metal shavings.

“We do our best,” I said, shrugging my shoulders.

Earlier, this skipper had hinted that there might be an opening aboard. As a matter of fact, he had restated, after taking a second look at me and praising me for my size and my youth—there was a damn good chance I could get on. Of course, first he’d have to check around town for his regular puller. In the meantime, there was this little drilling. . .

“Got some bad news,” he continued, taking a nip off the strip of beef jerky he’d been gnawing on. “Looks like my man finally came in after all.”

He offered me a nip of jerky.

Clancy’s! I thought, as I gathered my things on deck. My backpack felt as though its contents had been replaced with nuts and bolts. The drilling had corrugated the muscles of my upper back, shoulders and arms into what felt like one great anvil.

“Clancy’s!” I thought again, this time aloud as I jumped down to the dock, my legs shaking beneath me.

This was the best lead I’d had all day.

And it was just in this state, as I trudged back towards the boardwalk and the village, that I, Adam Porter, caught sight of Philip Swanson and his salmon trawler, the Western World.

There’s a world that waits for us, it only fails when we wait for it. ~ ty malone

A bit about Dave: Dave Barrett lives and writes out of Montana. His fiction has appeared most recently in New Reader Magazine, The William and Mary Review and fresh.ink. His novel--GONE ALASKA-- was recently published by Adelaide Books. His story--DONNA AND THE CATS--appears in the Fall 2021 issue of In Parentheses. He teaches writing at Missoula College and is at work on a new novel.