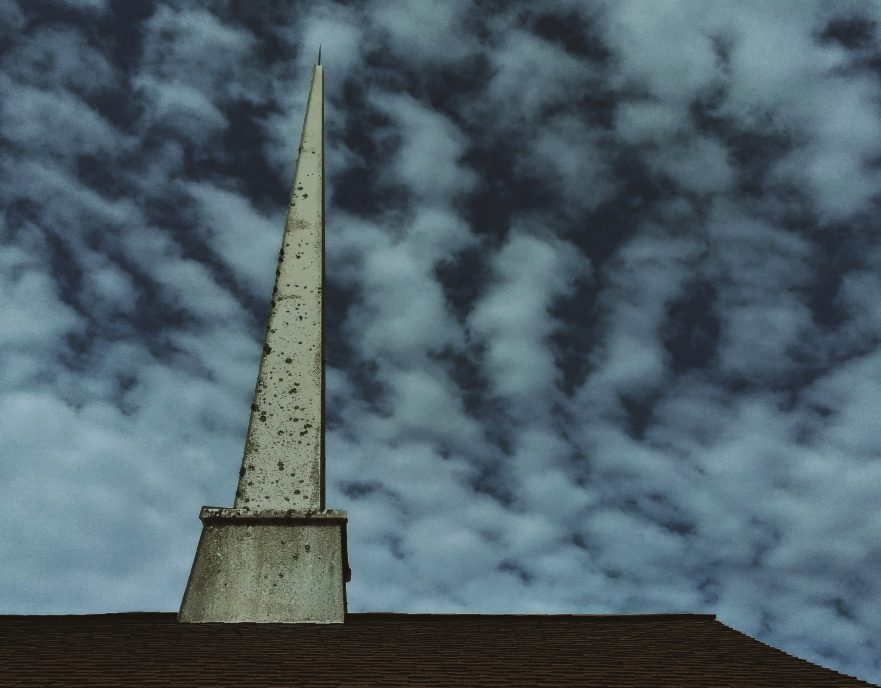 "The House, the Steeple" by Ty Malone

After prayers for small town dreams, miniature struggles for good grades to play sports before graduating to find someone to get caught up in a wedding proposal so ladies in room 39 can tally praises or prayer requests, Janice speaks wearing the elbow chub of Sunday school authority, “And now we can see there’s a new face with us today.” Janice slowly traces the room, her eyes ending at Susanne and Myrtle, “I hope we can all listen to what she has to share and respond with the love of Christ. Please share your story, Louis.”

Myrtle leans over to Susanne’s clip on earring. “Gum?”

Matching the volume of gossip, Myrtle answers cinnamon, shaping the letter C before it slips off speckled enamel. Spice burns her tongue as she questions instead of listens. “Who is that?”

Susanne licks her lipstick with the answer as Louis talks about a suffered life. Leaning into Myrtle with the patronizing body language of what’s new in town is really old news. “She’s that school teacher that… Well, you know.”

He was a good man until he started drinking, which became all the time. I’d work for so many hours and come home to an evil man. He’d kiss me goodbye in the morning and hit me after supper. But I thought having a child would fix him and us. God, help me—

To the center of the room where Louis sits, room 39’s hands reach for Louis and offer the power of what weights down and keeps them from touching their own bodies. Susanne knocks her knee into Myrtle’s when, among rushed breaths and sobs, Myrtle smacks her gum.

“Lord, give this woman strength to share.” Janice lifts closed eyes to florescent bulbs past the half-life of bright light. Hands press into Louis to squeeze out the sweet drips of story, hoping deep pulp beats with life in their palms.

“She needs to get on with this,” says Myrtle shoving the lump of degrading cinnamon flavor to the side of her mouth.

Again, Susanna digs at the nerves in Myrtle’s knee. “This is the worst thing, you should listen. Her husband beat her daughter. And—”

“She came home when it was happening.”

As Louis accepts the tattoos of weighted fingerprints branding someone’s secrets to their own tongues, Susanne’s words hide among Louis’s as well as air conditioning lifting ceiling tiles. “Hitting their child deaf wasn’t enough. He raped her retarded.”

I came home and he had her against the wall, our baby. That’s why she’ll never be right. I could see it, her future bleeding from her ears. She was gurgling what was left of her words. So I went to the closet, grabbed the first gun. As I loaded it, I could hear them. The noises. I walked back into the kitchen and shot him in what was left of his head. It was everywhere, all over us. And my daughter just looked at me the same way she looks at the world now.

Louis pulls her hands away from what reaches for her and wipes away tears. Myrtle swears she sees the blood streaks never leave her face. Streaks that stream and never dry. She forgets about cinnamon drying out her mouth and reaches into Susanne’s purse to grab a white stick of Winter Green. Fresh cleansing mixes with flavorless red.