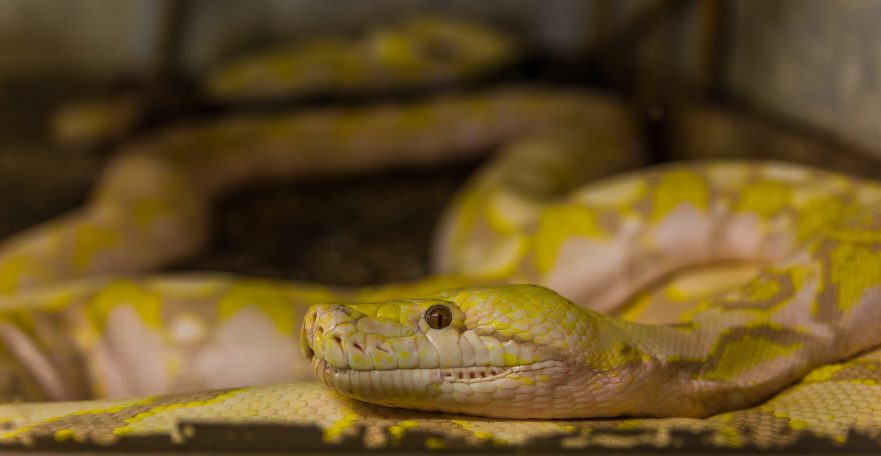 "Slither in Here" by Ty Malone

I eventually change accommodation and occupy a new flat that is an improvement on the first but totally unfurnished. The move is costly for me after surgery expenses. There is no money left with which to furnish two sunlit rooms with a balcony that has tree-fringed villas for company. It is an affluent neighborhood and each family keeps to itself.

The block of flats in which I reside look blissfully quiet at first. I congratulate myself on my successful choice. However, my preliminary visit to the communal area is quite intimidating. An old but sturdy woman, as hoary as life on earth, with double-glazed spectacles through which her eyes look like those of a ferocious reptile behind a zoo’s glass, ignores my morning greetings and brushes me off with surly words.

“You can’t hang your washing on these lines. Do it elsewhere,” she hisses, spewing poisonous saliva from an ugly mouth.

I thought at first that she was short of hearing so she could not return the salute of a new neighbor, but the authoritarian tone with which she now addresses me gives the impression that she owns the place and I am trespassing on her private space.

“I beg your pardon,” say I apologetically and withdraw in peace. I decide to avoid contact with her as much as I can but she is not to be avoided because, gluing herself to my mailbox, she leaves my letters open after endowing them with her Gorgon looks.

One night as I am watching my muted television, merely seeking the comfort of its lights which imbue my bare living room with a homely look, a strange sound right outside my front door makes me start and shriek. It is like nothing I have ever heard. The second time the sound pierces the door I find it impossible to move a limb or stir my tongue in any form, not even an exclamatory Oh.

The sound must have been that of a rattlesnake, perhaps some reptilian bells on tape. I manage to creep into my bedroom, firmly shut its door then plug my ears with cotton, disconsolately shivering on my bed-less mattress until the earliest yawn of dawn when I fall asleep out of sheer exhaustion.

I spend the whole morning at the library feeling tired and jaded, my eyes too sore to read, my mind too sluggish to concentrate. In the hush of the Domed Reading Room I doze. I only open my eyes when an accent with a Glaswegian twinge imparts comfort to my ears. In the glow of a red lamp my eyes meet a pair of blue-bells, sparkling with concern. A handsome man in his early forties who frequents the library as much as I do and whose face has become as familiar as the books I peruse, and with whom I have exchanged some words, remarks on my altered looks.

“Are you unwell?” Douglas anxiously inquires.

“I’m fine, thank you. Some trouble at home,” I answer, determined to be brief.

“May I help in any way?” asks he with a familiar tone, aimed at winning my hard-earned trust.

“Last night there were unusual sounds outside my door, certainly meant to scare,” I answer with hesitation.

“What sort of sounds?” asks he inquisitively.

“Something reminiscent of those in Kate Bush’s Experiment IV, the sound which kills from a distance – only in my case it’s a sound that numbs in an instant,” I answer, trying to lighten the import of what I am going to narrate shortly.

If a woman lives alone, people tend to attribute the deeds of scoundrels to an ailment in her head; a psychoanalytic reading is ready in the listener’s palm to be delivered like a prescribed pill to the mentally ill.

“Have you had any experience with snakes?” Douglas inquires.

“No, it’s just an instinctive guess. The hideousness of the sound brings snakes to my mind, or I could have heard something similar on television. Snakes do star in many films,” I elaborate.

“I can find out what it is if you’d allow me to spend the night at your place and when the sound is outside your door, the culprit will be caught in the act,” says he chivalrously.

I feel like Red Riding Hood but in the company of an irresistible wolf. Men waste no time, I think, then imagine myself in his arms at the first hissing sound. The last thing I want at this stage in my life is some tragic affair with a Roger-Moore type of married man.

“No, thanks, but very kind of you. I need to rely upon myself,” I emphatically state.

“Then, you ought to call the police if it happens again,” says he, with apparent disappointment.

The very same night the sound-raid returns, only with more resonance, as if amplified. I do panic but utter no sound and when I dial the police no words are capable of being released. He asks me to take a deep breath in the wake of which only confused words are uttered in no chronological order, so he informs me that they would call at my place at once.

When I open the door, two young policemen enter and look shocked at the bareness of my flat. There is not even a single chair on which to sit. I explain what I had heard with difficulty.

I hear them talk to my sly neighbor who complains about having his sleep only disturbed by a lonely woman’s maddening screams and nothing else. I wonder why he resorts to lying when I was speechless with fear. He must have wanted to portray me as hysteric.

The third time the rattle pierces my spite-bitten door, I call no police but rush to hide in my bedroom, flooding my ears with Snap’s latest album from an efficient Walkman. My indifference to rattle and neighbors’ scuttle makes the horror series peter out.

The madness is in us, it only spreads when we breathe and when we find ourselves alone in a world when every ear and eye thrives on our expert export: madness. ~ ty malone