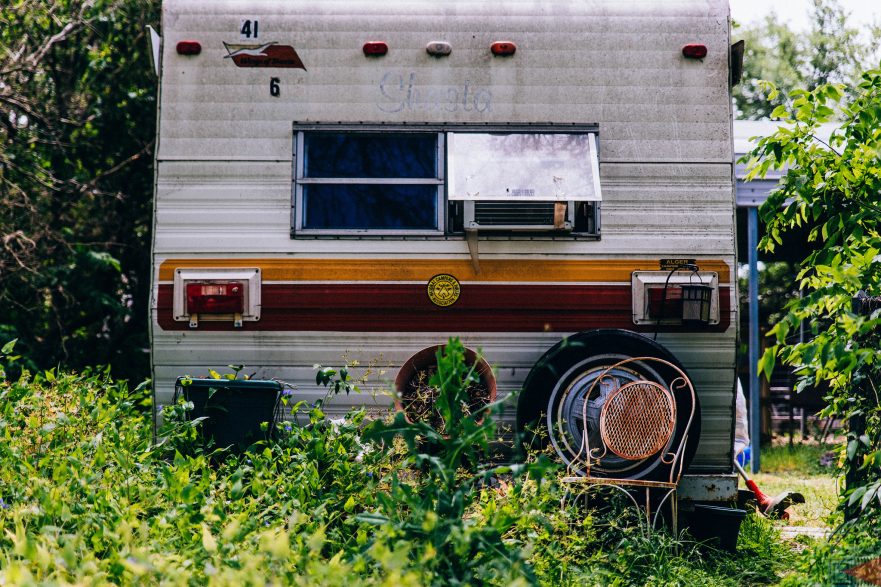 "At Home in the Weeds" by Ty Malone

My ex-husband and I bought a used Winnebago for $111,000. A doctor of jurisprudence, Michael had never gotten over me. The feeling was not mutual. Now in our sixties, I felt sorry for the man. His third wife, Nedra, had died. He’d made widows of every single woman he’d married or dated.

He was always a terrible driver, even when we were first married and he drove a Falcon stick shift. Good Lord! Those hills in Austin, Texas terrified me. Down we headed, but he braked just in time.

The Winnebago was a good twenty-three feet long. I sat at the helm and drove, feeling like a sea captain in a Herman Melville novel. Certainly not Billy Bud where the young man was hanged for disobeying an order.

Here, our penalty would be different. Prison for killing someone. Or prison for me for killing my ex-husband.

“A good woman,” he said. “Died of fright when I was driving our gold Lexus and she thought I wouldn’t brake in time.”

We were traveling in New Mexico. I wanted to visit a few museums in this hot country. Our A/C was on full blast. Such a ruckus it made.

The Vietnam Veterans Museum was something I longed to see. Our family were fightin’ U.S. Marines. Dad’s plane was shot down over Danang. How I wept! He was in a Phantom jet fighter, alone, under enemy fire. I imagined his plane twirling downward like a roller coaster ride spinning out of control and on fire.

The museum was a low-to-the-ground gray building seemingly sculpted into the earth. Looked to be camouflaged, like the uniforms the warriors on both sides had worn.

Pulling in, I drove slowly to find a parking space big enough for us. School buses were also parked there. The summer is traveling time.

I clamped a red U.S. Marine cap onto my dyed blonde hair.

“Help me down, Michael,” I said. Rarely a thoughtful man, he held my hand as I exited from the bus.

Without thinking, I said, “Your hand feels good in mine.” And wondered if we should sleep together that night.

There was a short line to get into the museum.

He was fishing into his “billfold” as he called it, instead of a wallet like us Yankees do, when I said, “Babe, the museum is free!”

The two of us wandered around. Folks stood at the exhibits – a Huey aircraft – “Bound Hands,” the symbol of prisoners of war – and wept. So did I, remembering Daddy.

“Never said you were,” I replied.

My ex was a conscientious objector. For four years, he worked loading airplanes with food for pilots, coloring books for Vietnamese children, soccer balls, Coca-Cola, and other products to help us win the war. The impossible war. The lying war. The ruination of LBJ and the proud Vietnamese people, free at last. Free at last.

Legend says the first Vietnamese descended from the dragon lord Lac Long Quan and the female heavenly angel Au Co. They married and had 100 eggs, from which hatched 100 children. Their eldest son ruled as the Hung king.

The museum became so crowded I insisted on holding Michael’s hand. I didn’t want to get lost. Music played in the background. The soundtrack of the war in Vietnam. Paint it black by the Rolling Stones, All along the Watchtower by Dylan, House of the Rising Sun by Eric Burdon and the Animals.

“Animals,” the perfect word to describe the Americans, I thought.

Every museum has a gift shop and a restaurant.

We sat down at a glass-top table and looked at the menu.

Before we knew it, a small Vietnamese or Asian woman walked over.

I ordered their pho with crispy cabbage rolls and shrimp tempura.

Michael flustered about and the server, “Be,” helped him order.

The food was exquisite. I felt like apologizing to Be. Why not?

“Be,” I said, when she came to collect our dishes.

“Can you ever forgive the Americans for invading your beautiful country?”

“Yes. It is all behind us now. Many of our people have come to America, and are living in Los Angeles, Philadelphia, Boston and other big cities.”

Her English was excellent. I said nothing about learning that Vietnamese women and other Asians had their eyes “straightened” and noses “done” to look more like Americans.

“Do you offer that special Vietnamese coffee?” I asked.

She said nothing, but hurried away, her tiny body disappearing amid the many patrons.

Soon, she brought us each tall cups of iced coffee with condensed milk and plenty of sugar.

“Nothing better!” I said.

Michael sipped his and agreed.

We left shortly after that. He helped me up into the Winnebago and I drove off, having no idea where to go.

He steered me to a Holiday Inn. We pulled into the parking lot.

Our room had a huge king-sized bed. We ordered some champagne from room service and made love all night long.

We kept the radio on, which played Miles Davis, John Coltrane, and someone named Ethan Iverson.

Love one night at a time until it’s time for the last night of love. ~ Ty Malone