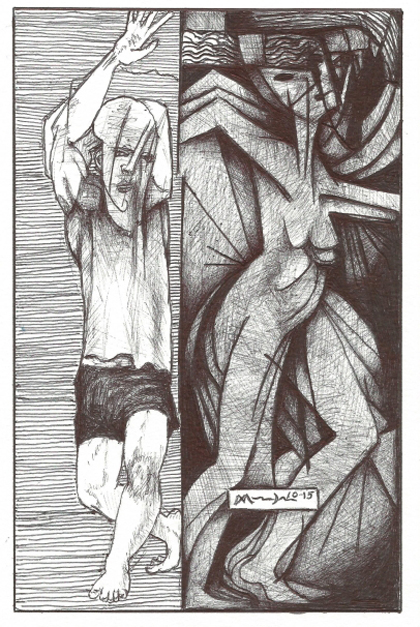 I was in a considerable state of nervous overload when the Black Rooms made their first appearance in my young life. That life had been one of panic and slip sliding instability. Evictions again and again from a long succession of scabrous hovels the merest step from wretched homelessness.

All of them grotesquely filled with gobbling monstrous ghouls. Such places had dominated long distorted years at my most impressionable. Sly tripwires of Fate apparently intent on casting me painfully down at every new step.

Cataracting my psyche. Violating with squalid humiliations every nuance of my pale existence. Fear corrupted and coloured everything.

Against my will I was becoming its painted puppet. Robbed even of my precious freedom of will. Poverty drove me to the impersonalized anonymity of a great capital. Rotted inhabitants of the crumbling house in a crumbling metropolitan borough where I rented my miserable rooms of refuge scarcely better than the open brutalities and moral pitfalls of street wandering.

Refugee from the spiritual dissonances with which I was afflicted, I discovered the bizarre treasures of the Black Rooms.

What made them so vivid was the reverberating chaos that echoed through me in those isolate days. My past was abbreviated. My future was bleak.

At war with myself I wrote feverishly of cosmic nightmares. Inner mutations and metamorphosis. Diabolic sensuality that led to powers and impunity I could never grasp or possess.

Etched myself in those stories as a hirsute bird lashed by colossal elemental storms. Flung about by cruel purposeful gods. A pitted chess piece in shattering play.

But then I came across dark harmony. Coolly meditated orchestration of a sublime melancholy. A wonder unexpected as it was compelling.

On the floor below me, a fellow tenant I met only by chance had achieved the grandeur I so coveted. Which I must emulate for myself. In two plain rooms there lay a funeral sepulchre. An altar to childhood intertwined by sinuous black ribbons of phobia. Such a compass of intensity that it was darkling exaltation distilled.

Within a crowded self-created womb of lewd deathliness there brooded a creature like none I have ever beheld. Gaunt and thin, a piercing stare blended with an unnerving grace of carriage and manner ran over me warily from my fellow tenant. I ingratiated myself to understand him better for my own purposes.

Stopped now and then by a slash of ill-temper or long mutual avoidances. It was not a house that encouraged the cultivation of a friend. But I found myself a guest in the Black Rooms again and again, marvelling at his collections.

Skulls and skeletons and danse-macabres of startling graphicness. A steel riot of crosses and crucifixes. Silhouettes and symbolisms of the Grim Reaper beyond number mixed up with vintage children’s toys and books.

Volumes tortured canvasses of Schiele and Bosch. Complete works of the Marquis De Sade and the Comte de Lautreamont. All part of his remorseless library.

Great black folds draped the walls and tiny passage. Gathered themselves into an ominous bed of black that made a raised compartment set back from the main displays. There the young curator, for he was no older than I, dreamt his way through an intricate symphony of gloom.

Presided with tragic and lonely dignity over his private protean gallery. There was a breath of the future as well as the past in both the place and the creator. Harsh extremes of a grossly realistic and gory medievalism contrasted with a kind of haunted futuristic futility.

So to with my enigmatic fellow tenant himself. He dressed invariably in black garments with elegant shoes and strange accessories. Habitually wore a hood in all weathers recalling that of a monk.

Baroque quality about him turned heads. Too distinct amid the ragged and synthetically garish crowds that gaped around him. Too much sullen and resentful attention directed towards him by the crude-minded as he went his way.

Toing and froing on unknown errands with a furrowed intentness. Strange smouldering glamour attended him like a Doppler-distorted tune. His shadow seemed improbably long and disproportionate.

In privacy there was music which I would sometimes hear muffled through the floor that separated our rooms in the house. Envisioned him floating on rough and raucous rills of angry musicians. Revelling with a complicated frisson of dark emotions.

Lost in the grating anguishes of those who groaned within so calamitously like himself. Scored their inner horrors into hellishly madcap minstrelations. Super-percussioning zithering like nothing I had ever heard before.

Sizzling auditory babel. Raging noise hammered out of meticulously tuned stereophonic equipment my fellow traveller in darkness so prized. Music that was a shocking punctuation and distillation by others of every influential style and motivation that composed his eerie aesthetic.

Most comprehensive assembly of strange music I ever saw and which he slowly began to share with me. A startling library constantly acquired and added to. Row upon row of monochrome and negative images stared at me from discs and tapes and vinyl with their lurid and subversive sleeve covers.

Epitome of the anguished persona he seemed to personify. Embodied with such gravity and natural empathy. It frightened me with prophetic visions.

Macabre images in a thousand iterations frown on me. Engrave themselves forever on my soul. Perfectly tuned tomblike amplifiers rant on in my audiently scarred memory with the doom-laden booming fury that burns hot in the savage urban wilderness and hinterlands I wander still.

For those moments I shared with that nameless fellow sufferer I knew a grace never felt before or since.

Thus I remember and mourn and yearn for and shall build for myself a nurturing uterine cloister of grand Black Rooms.

Sometimes the only place for us is our own Black Room. ~ mike fiorito

A bit about Edward: Edward St.Boniface (psuedonym for Ed Griffiths, under his real name on FACEBOOK) lives and languishes in London UK, grooving on the problematic metropolitan vibe and utterly failing to connect with the contemporary Zeitgeist. Having therefore gladly embraced madness (which he calls 'Enlightenment'), Ed intends to bring about a forthcoming Age of Enlightenment. More seriously, writing to the virtual exclusion of all other considerations is Ed's obsession. Having come to London to experience as different a life as possible from his quiet Midwestern Canadian beginnings, the Capital has proved an engrossing and fearsome tutor for his ambitions. Writing across fantasy, science fiction, contemporary-realistic and surrealistic themes, Ed loves to explore the potentials of potential itself. In 2013 he self-published three novels set in the London of the 1980s to the 2010s starring three inter-related characters growing from idealistic and ambitious young men to embattled middle age, and there is a link here to some of the remaining printed copies on AMAZON. Ed has also put some fun work up on KINDLE such as a parody of Milton's 'Paradise Lost' entitled 'POTRZEBIE IN PANDEMONIUM!' and a loosely related work called 'THE NEFARIOUS ADVENTURES OF SUSPECT BROWN'. These also via the AMAZON (link below). Otherwise, Ed also has some fiction up on WATTPAD (link below). He hopes you enjoy and perhaps even find yourself mildly compelled...