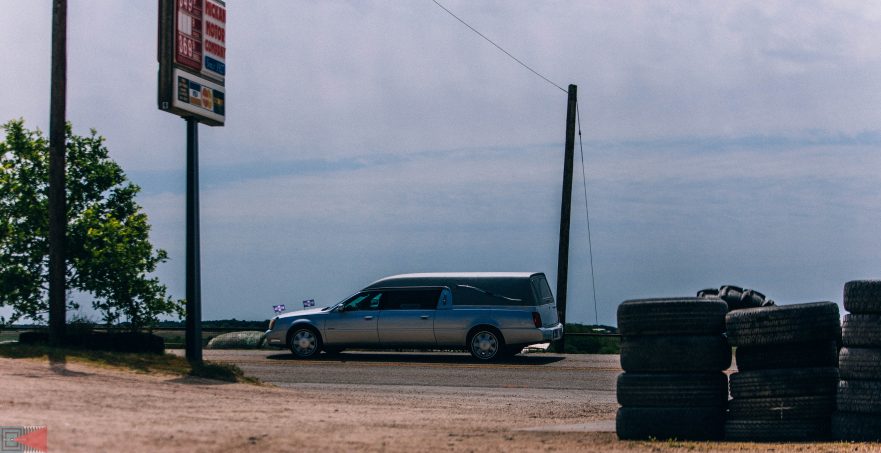 photo "Last Ride" by Tyler Malone aka The Second Shooter

“I wish I could say things are better,” wrote Charlie Anderson, about his wife Callie, “but they’re worse.” The experimental drug for her early onset Alzheimer’s had not worked. “Now it’s like I have no wife. She can’t speak and has a blank look on her face like a dead fish.”

I was on his email mailing list and felt awful. I knew them quite well, knew Callie when she was a jogger and would race breathlessly by my house. Their house in Bucks County, Pennsylvania, was beautiful. I’m honored to say I was a regular visitor although I only knew her for two years.

Such pleasure I got when I fast-walked to their house. A small statue of the Virgin Mary was in the front yard, along with a splashing fountain. The back yard was filled with trees. Ever seen a lavender wisteria tree? Its branches slope down like an umbrella and the aroma is heavenly.

The Anderson family did indeed believe in God and Jesus Christ. Their saving grace, I thought. I hadn’t made up my mind about the Afterlife, and I had no intention on finding out, even though I am Callie’s age, sixty-five.

Even though Charlie was her guardian angel here on earth, he had his flaws. Severe ones. Even my own husband, Jerry, noticed them when we visited. When Callie was well, he “corrected” her and told her what to do.

“Callie, dear,” he would say, “have you gone on your stationary bike today?” Or, “I’m glad you’re reading The Last Temptation of Christ, but the author’s name is Kazantzakis, not Kazanjian, which is an Armenian name.”

Jerry and I thought he was a downright bully. Jerry refused to visit anymore and I couldn’t blame him. My mission when I visited was to protect Callie from her husband.

The next letter told us he had put Callie in a home. “All My Darlings,” it was called. Darlings! You can shoot me before you put me in a home.

On a sunny day in late May, I drove over to visit. A sliding glass door let me in and I wore a visitor’s badge. The place smelled of food from the cafeteria. I was relieved. I half-jogged to Callie’s small room, knocked and entered.

She sat in a chair and looked out the window.

“We both love looking out the window,” I said, as I stroked her colorless strands of shoulder-length white hair.

What a view we had from the sixth floor. Just cram them all in, I thought, and hope they die soon. Or, rather, not soon, so “All My Darlings” could rake in as much money as possible.

Positioning myself directly across Callie in another chair, I stared hard at her. What did she know? Was anyone inside her lithe, athletic body?

She managed a little smile. And nodded her head up and down.

I looked around her room. It was cheerful enough with bright pink walls and many family photos. A large one of Charlie stared at her from her bedside table. She pointed at it, got up from her chair, and plucked it off the table.

She dropped it into a wastebasket.

What the hell was going on?

A small radio was near the huge window, which could not be opened.

I turned it on. It was set to the classical music station. At one time, Callie played the organ at Saint Basil’s Church and taught Sunday school. She and Charlie were unable to have children. Good, I thought, Alzheimer’s is the worst thing that can possibly happen to a family.

When next I visited Callie, she had been moved to another room. A smaller one. Visiting hours were more limited.

“Hello, Callie,” I said, when I entered. She was in bed, emaciated. I figured she was trying to starve herself to death, but of course “All My Darlings” wouldn’t allow it. I set a vase of white sweet-smelling lilacs on her bedside table.

She looked up at me and used to her hands to communicate. The motion was as if she were wiping something unpleasant away. I nodded, as if I knew what she was talking about.

When I left, I returned my name badge to Linda, the receptionist.

We looked at one another.

“Linda, something fishy is going on.”

“I guess you haven’t heard,” she said.

“Callie and Charlie were upstairs in the sun room.”

“On the eighth floor.”

Sure enough, they both went out on the balcony.

“We had no idea how strong Callie was. Or that she… intended to kill her husband.”

There were several witnesses. Visitors.

“He said he’d never forget the image of Charlie falling. It was like he was bicycling, pumping his legs as he fell.”

I was furious with Callie. I also had a lump in my throat and saliva was gathering in my mouth. Quickly, I found a wastebasket behind the receptionist and vomited in there.

“You’ll do no such thing. That’s why we have a janitorial staff.”

As I drove home, I turned on the jazz station. Miles Davis was playing “The Birth of the Cool.”

Jerry was in the yard, planting our vegetable garden.

“Jerry, Jerry!” I cried and fell into his arms, weeping.

Old age claims us all, but what it does to us is different. ~ tyler malone