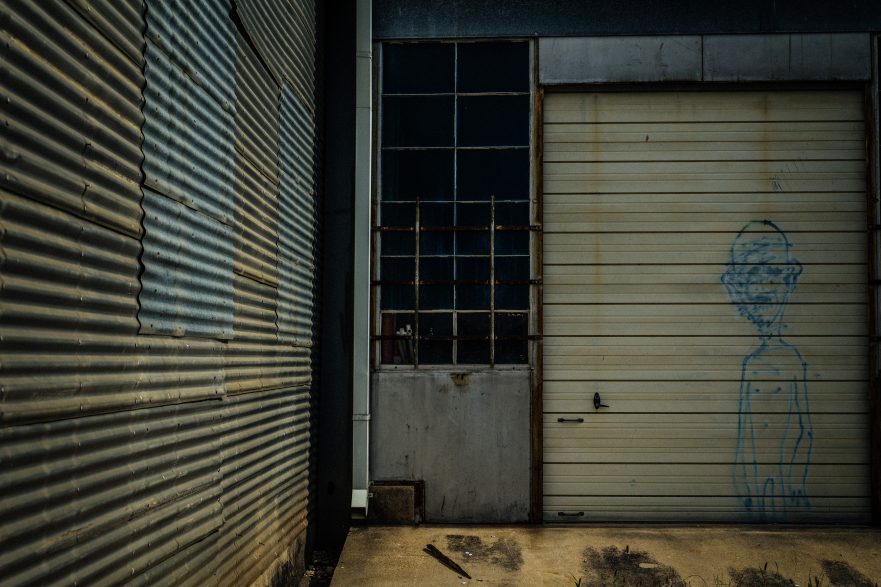 photo "Humanity's Ghosts" by Tyler Malone aka The Second Shooter

This article first appeared in the Portland Press-Herald on February 8, 2046

Milton Schaefer of Portland was the first American to have a digital copy of his mind implanted into a robot. Schaefer, who had been in ill health, started going to Eternity, Inc. in Freeport last July. At Eternity, Inc. technicians were able to make copy the contents of his mind on a neural network. After he died, the digital copy was transferred to the hard drive of a specially-made robot named Dmitry.

The technology was developed in Russia over 25 years ago by Dmitry Itskov. Itskov’s goal was to prolong his own life by moving his consciousness to a robot. When Itskov died in 2042, the neural network of his mind was moved to a robot. Itskov’s life as a robot was not very long. The machine kept breaking down because of technical problems. After a little over a year, it was discarded.

William Landsman, a computer scientist at the University of South Maine, had studied at Itskov’s laboratory in St Petersburg. He thought he had solved the technical problems that had plagued the Itskov’s attempt, and he opened Eternity, Inc. in Freeport a year ago. After interviewing 20 candidates, Landsman chose Milton Schaefer for the first project.

Schaefer was well-known in Portland. He had been a member of the city council at the time of his death. He was also president of Gadgets, a company that sold electronic devices online.

From the beginning, the Eternity, Inc. project created controversy. People who spoke to Dmitry/Schaefer were amazed. Some wondered, has science finally defeated death? Can I live forever?

Others saw multiple problems arising from machines with human consciousness. An editorial in the Press-Herald asked: “Are we ready for this? Have we jumped into something that we don’t know how to control? A machine with a human mind raises all kinds of legal, ethical, religious, and even practical questions. We must answer these questions before another man/machine is created.

Gerald Harding, minister of Grace Baptist Church in Portland, called for making the procedure illegal. “God decides when we are born and when we die. To try to override that is to defy the will of God.”

The legal questions began as soon as Dmitry/Schaefer looked around the room in Eternity, Inc. and saw his wife Eleanor. “Well, honey,” he said, “as soon as they clear me here, you can take me home.”

Eleanor’s eyes widened in horror. “Forget about it. I’m not going to take you home with me.”

“No, you’re not. I married Milt Schaefer, a man, not some machine. You’re not Milton. He died two weeks ago. I’m not taking a talking machine home with me.”

Schaefer got a taxi back to Portland. As they came to Congress Street, he asked the driver what the time was and what day.

“Drop me off at city hall. I have just enough time to make it to the city council meeting.”

As he tried to enter the council room, Jimmy Broadhurst stopped him. “You can’t go in here, sir. This meeting is for council members only.”

“I am a member, Jimmy. I’m Milton Schaefer.”

“Don’t pull that shit with me. Schaefer died two weeks ago.” Broadhusrt looked carefully at Dmitry/Schaefer and said, “Jeeze, you’re not even a person. You’re a robot.”

“If you’re Milton Schaefer, I’m the King of England. Only citizens of Portland can be members of the city council, and only human beings can be citizens. Get out of here.”

Dmitry/Schaefer rented a car and had it drive him to Gadgets in Gorham. At the company headquarters he went to his office and found his cousin Billy Schaefer sitting at his desk.

“What are you doing in my office, Billy?” he demanded.

“I’m your cousin. I’m the president of this company.”

“Oh, don’t tell me that thing worked. But you’re not president any more. My cousin died two weeks ago. The board of directors made me president in your place.”

“If they made you president, they can unmake you.”

“I don’t think so, Milt. After you started fooling around with that crazy idea of putting your brain in a robot or whatever you did, the board consulted with our attorneys. They say you have no legal standing, so either you leave, or I’ll have security escort you out.”

Dmitry/Schaefer rented a room at the Holiday Inn called his friend Bernie Franks. Bernie had been his roommate at the University of Maine. They met at DiMillo’s. At first Bernie seemed interested in Schaefer’s transformation, but he soon began to fidget. He was clearly uncomfortable. He glanced at his watch and said he had an appointment. He left his hamburger half eaten and picked up the tab.

He shook Dmitry/Schaefer’s hand and said, “It was good to see you, Milt.” Then he hurried out of the restaurant.

Schaefer sat there for a while. He thought about calling some other friends, but decided against going through another awkward meeting. As he walked back to the Holiday Inn, he thought about throwing himself in front of a car on High Street. He knew that the car was automatic, and it would stop before it hit him.

Was eternal life a gift, he wondered, or a burden?