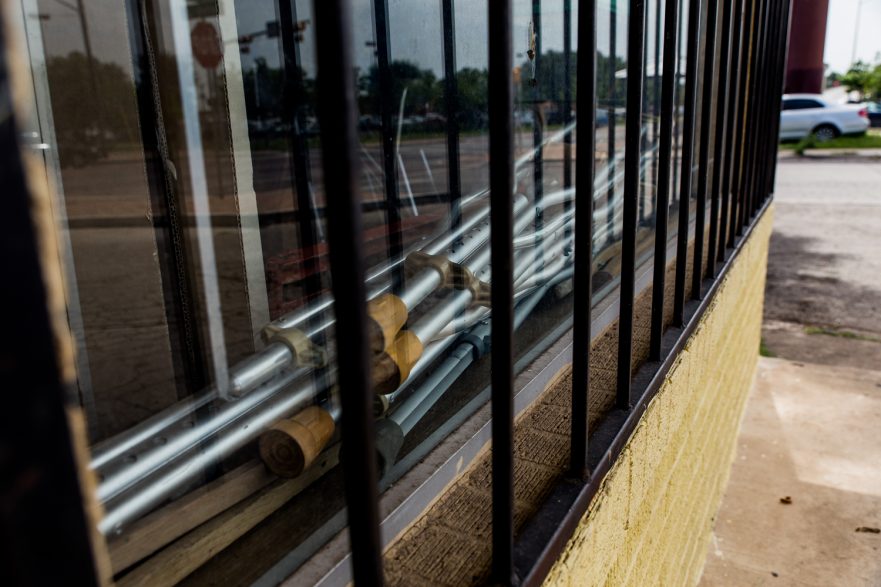 photo "Bent to Broken" by Tyler Malone aka The Second Shooter

I don’t remember her name. Let’s call her Sarah. I do remember where she worked: the Kfar Shaul Psychiatric Hospital, as some kind of psychiatric social worker. Like me, she was a new immigrant to Israel, and we both sang in a chamber choir in Jerusalem.

“Is it true you’re in a band?” she asked me one evening during a break in the choir rehearsal.

“Yes,” I said proudly. “I’m the girl singer in a country band. It’s me and three guys.”

“And are you getting a lot of gigs?”

“Well… no.” It was 1979, and Israelis were not interested in American country music. “We’re kind of digging around for places to play. We don’t even care if we make any money.”

“Then I have an offer to make you,” she said. “Would you like to come and play for my clients?”

“It’s a psychiatric facility,” she said. “Not a hospital. My clients would love it if you came. They don’t get a lot of entertainment. And look, there are staff members there too. Believe me, it would be a mitzvah if you came. A good deed. Think of it like that,” she said encouragingly. “A chance to do a mitzvah!”

“Here we are!” said Sarah cheerfully, in her best Hebrew. “The Old Country Band has come to play for us!”

At this, one of the attendants stood and slowly made his way to the end of the room, and another door. Producing another key, he inserted it into the lock.

“Well,” said Sarah brightly, “It is the locked ward.”

“Locked ward?” I repeated. “What does that mean?”

“It means,” said a second attendant, “That this floor is for acute cases. People we don’t want leaving on their own. Psychotics. People who attack other people on the street—not necessarily mentally ill, just violent. The police shove them up here till they decide what to do with them.”

“But don’t worry!” chirped Sarah. “They’re all medicated and there are lots of staff members with them.”

The dayroom was big, empty and flooded with light from barred windows high up on the walls.

The four of us walked slowly around the edges of the room. I winced as the door slammed behind us and we heard the key turn in the lock.

“Here’s an electric socket,” said DS. “I can plug the amplifier in here.” He looked around. “I need a table to put the leads on, though. Also, the violin when Danny isn’t playing it.”

“No tables allowed,” said the attendant who had followed us in. “They get thrown.”

“Ah… then no chairs either?” I asked.

The attendant did not bother to answer.

Alan cleared his throat. “So, where does the audience sit?”

“So then what keeps them from… I mean, usually there is some kind of separation between the performers and the audience.” Danny looked at his instruments. “How can I, I mean, it’s all on the same floor….”

“You are here,” said the attendant. “They are there. And I,” he said, gesturing at an area in between, “Am here. I am here, and so is the rest of the staff. Don’t worry. Everything will be fine. Now, are you all ready to play? I can hear your audience coming. They’ve been waiting all day for you.”

“Move forward!” hissed Alan. “You have to stand further forward. You’re going to trip over the cables.”

I gripped the mic and took another step towards the crowd of fifty or so men and women in front of me. The crowd cheered. I kept singing. I could feel the rest of the band members at my back, sawing away at their instruments. A gap of perhaps three meters separated band from audience. On the edges of the crowd, attendants with arms crossed over their chests stood eyeing the room. Each time the gap between band and audience shrank more than a few centimeters, an attendant would step forward and the crowd would move back.

Behind me, Alan and Danny belted out their part of the song in harmony. I pulled my gaze away from the far windows and onto the audience. All of the heads I could take in were bobbing to the beat of DS’s bass guitar. Off to one side, a few men were dancing.

The song ended. “More!” yelled a woman. I looked back at the band, then out at the audience. “Hello to you all!” I said into the microphone. “Glad to be here to play for you!” Clapping and cheers. At the very back of the crowd, I caught a glimpse of Sarah, cheering and clapping along with everyone else. I took a deep breath and launched into the next song.

By the time we were an hour or so into the set, it became harder and harder to keep the audience from moving forward. When a few men managed to dodge the attendants and get close enough to the band to touch the instruments, there was a general surge of activity that resulted in us getting shoved back the way we had come by some of the attendants, while others broke up the crowd.

“You guys were a big hit!” crowed Sarah the next time I saw her at choir rehearsal.

“I could see that people enjoyed the music. And it was certainly a, well, a special kind of audience.”

“I’m glad you enjoyed the experience,” said Sarah. “And it was a really good chance for you all to do a mitzvah. I’m sure you’ll be happy to do it again.”

“First and second floorers,” said Sarah with a big smile. “They like music too. And think of the mitzvah!”

Music should be madness, but it’s noise manipulated into something that doesn’t need language, self-control, or to explain itself. It’s what in us, only freed. ~ tyler malone